I Like My Challah Hyper-Local and Baked to Order 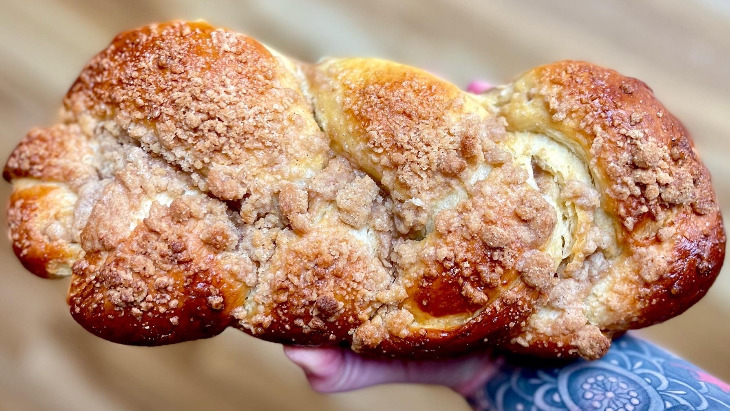 How COVID spurred a whole industry of home bakers selling challah on instagram.

Where do you buy your challah? Do you have a local bakery you frequent? Pick up a lackluster loaf from your local grocery store? (No shade to your grocery store. Maybe they make a nice loaf! All I’m saying is that grocery store challah is a hard pass for me where I currently live in semi-rural Maine.) Maybe you haven’t found your go-to shop or bakery to pick up a loaf. If so, perhaps you should consider one of the freshest direct-to-consumer methodologies on the market: Instagram.

While selling challah via social media isn’t new, hyper-local challah offerings have increased significantly over the course of the COVID-19 pandemic. In the last week, I’ve talked with several cottage industry challah bakers who have taken to Instagram to promote and manage orders for their weekly challah offerings. Despite their geographical diversity – representing Brooklyn, NY to the American South, Israel to Sydney, Australia – Zoe Primeaux (@primeauxnosh) and Dolly Meckler (@challahdolly), Pepper Segal (@peppelahchallah), Deborah Dickson (@lovelovechallah), and Julie Chiert (@challah_with_love) respectively all got their start in a similar place: their home kitchen and Instagram.

NOLA-transplant Zoe Primeaux’s Instagram page provides square after square of mouth-watering challah eyecandy. Her sleek braids and neutral color palette – occasionally interspersed with bright slices of King Cake, her other passion project – offer a distinctly modern and artisanal picture of challah. Meanwhile, on the other side of the globe, @challah_with_love’s Julie Chiert offers challah in not only the iconic braids we are accustomed to seeing, but whimsical and jaw dropping designs as well. If you live within delivery distance of Chiert, you can order a challah teddy bear, commemorative number for a birthday, or any number of other symbols and architectural feats, stuffed with a variety of sweet and savory flavor combinations to boot. Julie’s order form is thorough: a two-page PDF with small font and several steps, allowing you to select your challah dough flavor, fillings, and toppings. And that’s not all. For the lucky residents of Sydney, Australia, you can also order your challah as a pinata, laced with champagne, or in the colors of your favorite football team. 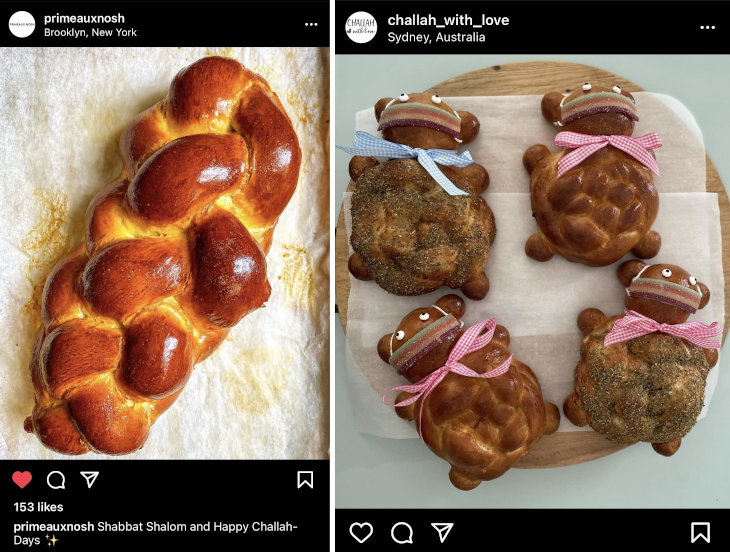 Above, left to right: Classic challah by Zoe Primeaux (@primeauxnosh), and ½ size “Covid Bears” (teddy bears wearing edible masks) by Julie Chiert (@challah_with_love). These bears were commissioned by local preschool teachers for their students who were home with COVID-19. Two bears have tummies filled with Nutella, and two have “Mediterranean mix” tummies.

When I asked Primeaux her favorite flavor, she admitted she is a “purist,” favoring a classic loaf or, at most, one adorned with sesame seeds. Pepper Segal of Peppelah Challah perhaps occupies a middle ground of the two extremes set by Primeaux and Chiert; hailing from a culinary background (“Cooking!” she assures me, “not baking”), Segal offers several rotating flavors, including garlic parmesan (her favorite), “challahpeño,” spinach truffle, and vanilla coffee crumble. Segal got her start baking challah when she suddenly became the personal Jewish Day School teacher of her two young sons, who were sent home in March 2020 due to the pandemic. She says, “In the beginning it was just something the three of us could do to differentiate the days of the week.” Soon, they were producing enough to give away to friends and family in her surroundings of Greensborough, NC and, eventually, sell nation-wide. Segal’s Instagram feed is peppered with mesmerizing videos of “gluten pulls” – where she deflates her dough by pulling it open to expose the developing gluten strands as opposed to the more common “punch” method. These videos routinely reach hundreds of thousands of eyes, and have even breached a million views on occasion. 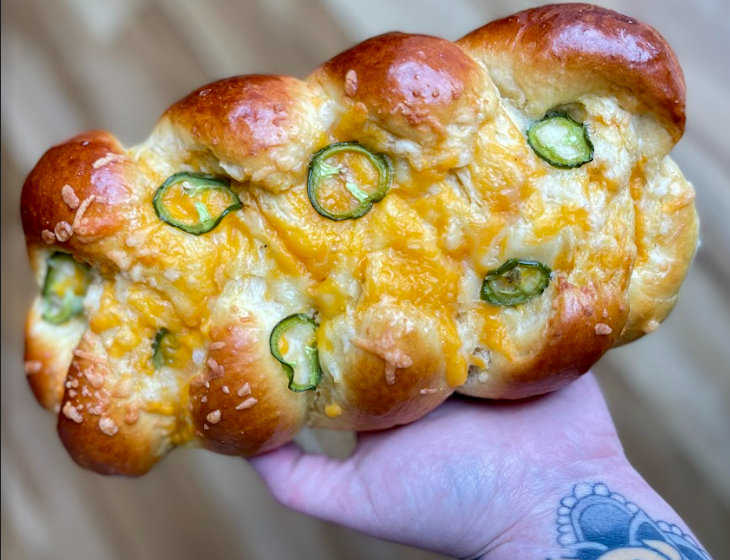 Despite their geographical and philosophical differences, the bakers all had something in common. Each baker, when asked whether baking challah professionally has changed their relationship to Judaism, shared that it has brought them closer to their respective communities, as well as with each other through supportive challah Facebook groups and other networks. Primeaux even mentioned growing closer with those in her Brooklyn apartment building; she regularly trades loaves of challah for delicacies such as arroz con pollo with a neighbor.

Chiert shares that in addition to bringing her closer to her neighbors and the Jewish community of Sydney, she’s also seen her challah creations bring others together. “People use my challah to show one another they care… to celebrate birthdays, new babies, new neighbors, sending challah to each other just because. It’s touching to be a part of it.”

Bakers Deborah Dickson (@lovelovechallah) and Pepper Segal (@peppelahchallah) both use challah for educational purposes as well, teaching traditions and holidays through food. Dickson goes so far as to create custom challahs each week to illustrate a theme or point in the weekly Torah portion; each of these loaves are delivered with a custom note card with reflections and thoughtful prompts for discussion at her customer’s Shabbat dinners.

One baker goes a step further than community building and education: Challah Dolly’s Dolly Meckler is on a mission to make challah “cool, modern, and [a] necessary staple.” The timing is certainly ripe; the last two years have been very, very good for challah. “I don’t want challah to only be for Friday nights. Challah is delicious and should be for every day.” Meckler is so committed to this PR project, that she’s largely outsourced her baking production to keep up with demand, which also frees her up to focus on other challah-related enterprises. From pop-ups around NYC and the northeast to brand collaborations (challah earrings anyone?), Meckler has been hard at work serving as a challah spokesperson. While Meckler’s product can still be purchased online, if bricks and mortar is still your speed you can often find her around the boroughs of New York City – or as far north as Connecticut – in various pop up locations. To find out where though, you’ll probably need to be on Instagram. 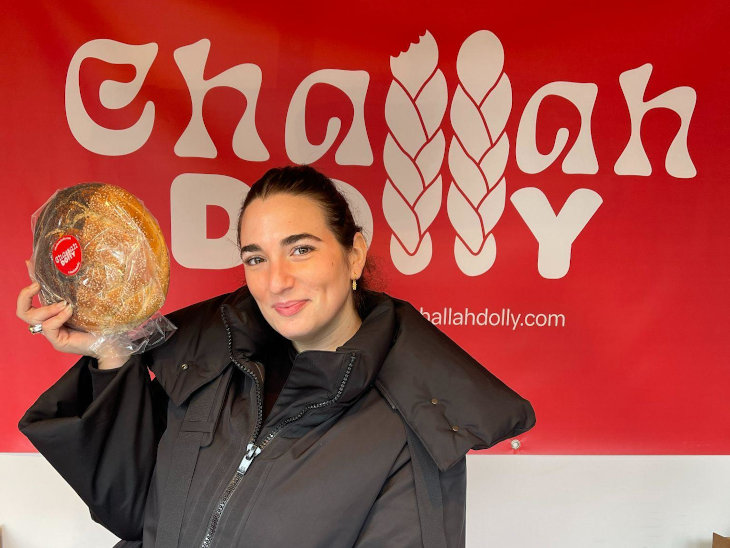 Lena Beth Schneider (she/her) recently uprooted her life as a nonprofit director of strategic initiatives in Washington, D.C. to become a baker and food writer in Southern Maine. Both professionally and in personal life, she focuses on matters of food insecurity, substance use disorder treatment, and food justice.

Lemon Lover’s Hummus Recipe
The Promise Of The Land
Which Chat Are You On?: Parshas Behar/Lag Ba’Omer
Do You Like Slow-Cooked Food? Thank the Jews
Comments
MOST POPULAR IN Food
Our privacy policy