Hey! What’s That Thing On Your Head? 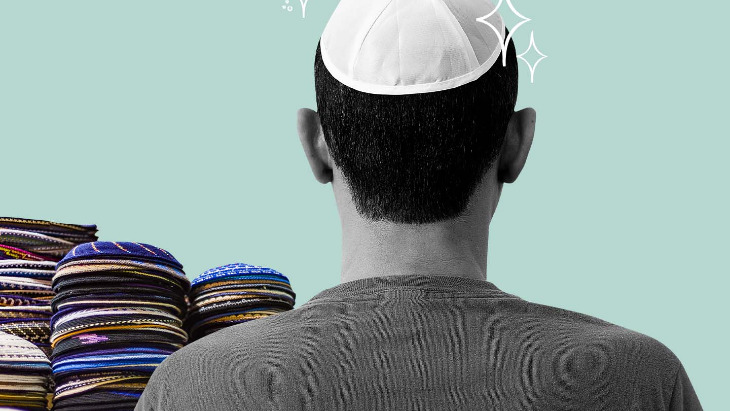 What is a yarmulke and why do Jewish people wear it?

It is perhaps the most instantly identifiable mark of a Jew.

In the Western world, it is customary to remove one's head covering when meeting an important person. In Judaism, putting on a head covering is a sign of respect.

In the Talmud, it says that the purpose of wearing a yarmulke is to remind us of God, who is the Higher Authority "above us". External actions create internal awareness; wearing a symbolic, tangible "something above us" reinforces that idea that we also have a spiritual purpose.

It's easy to remember spirituality while at the synagogue or during the holidays. But Jewish consciousness is meant to pervade all aspects of our lives – how we treat others, how we conduct business, and how we look at the world.

Appropriately, the Yiddish word for head covering, "yarmulke," comes from the Aramaic, yira malka, which means "awe of the King."

In Hebrew, the head covering is called "kippah" – literally "dome."

To wear a kippah is to proclaim "I am a proud Jew." Indeed, wearing a yarmulke is a big statement, and psychologically obligates the wearer to live up to a certain standard of behavior. A person has to think twice before cutting in line at the bank, or berating an incompetent waiter. Wearing a yarmulke, in a sense, makes one a Jewish ambassador, as if his actions reflect on all Jews.

Of course, putting on a yarmulke does not automatically confer "role model" status. Sometimes we unfortunately hear of a religious person caught in some indiscretion. I recall one time in Los Angeles, noticing that a drunken, disheveled man was walking down the street – wearing a yarmulke! He wasn't Jewish, but he'd found an old kippah and thought it helped him fit in with the neighborhood atmosphere. For me, it drove home the idea that it's not fair to "judge Judaism" based on someone displaying the outer trappings of observance.

When to Wear a Yarmulke?

What kind of head covering qualifies? Basically anything – including a baseball cap or a scarf tied around one's head. Of course, in the synagogue, some feel it is more respectful to use a regular yarmulke.

What about instances where wearing a yarmulke conflicts with business and career interests?

If your question has to do with possible ramifications in Jewish law, there is room to be lenient. For example, a trial lawyer might not be properly serving his client if the jury will be distracted by the yarmulke. Former U.S. Senator Joe Lieberman may have used a similar line of reasoning.

Of course this can cut both ways. A prominent businessman once told me that for every client "lost" because of his kippah, he gained two others who respected his display of integrity and courage in wearing a kippah.

For many seeking to express their Jewish identity, "to kippah or not to kippah?" – that is the question. Here are two fascinating first-person accounts of how to deal with this issue:

30. Shinuy Makom: Wrap-Up and Review
It Takes A Lot Of Faith To Be An Atheist
How Instagram Brought Back This Nostalgic Soup
What Makes Eli Run?
Comments