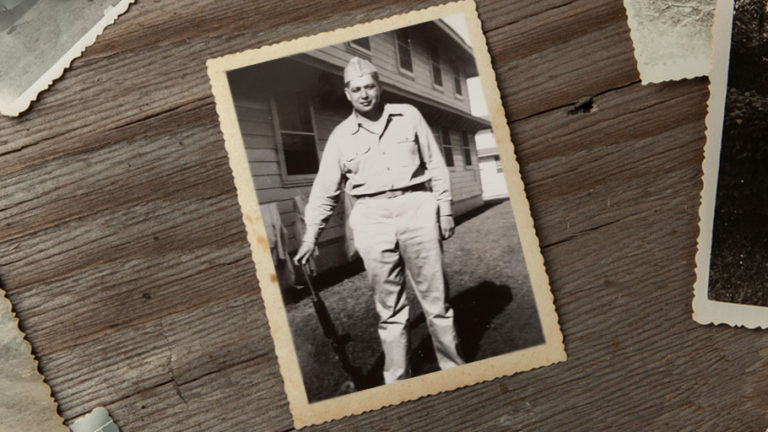 It was the first Thanksgiving that Mom was a widow. Instead of the traditional meal of home-cooked turkey and stuffing, we bellied up to a buffet at a forgettable restaurant in a northwest Chicago suburb. We quietly ate our meal, our silence punctuated by the roar of low-flying jets landing and departing at nearby O’Hare.

“Well, at least, there are no dishes to wash this year, Mom,” I bravely said at the end of our meal, forgoing a limp piece of pumpkin pie for dessert.

Mom looked up with tears in her eyes, reached in her purse and handed me a large manila envelope. “I want you to have this. You’re a writer. Maybe you can use it.”

Inside the envelope were the seeds of a story about a foot soldier from Chicago who served courageously during World War II. 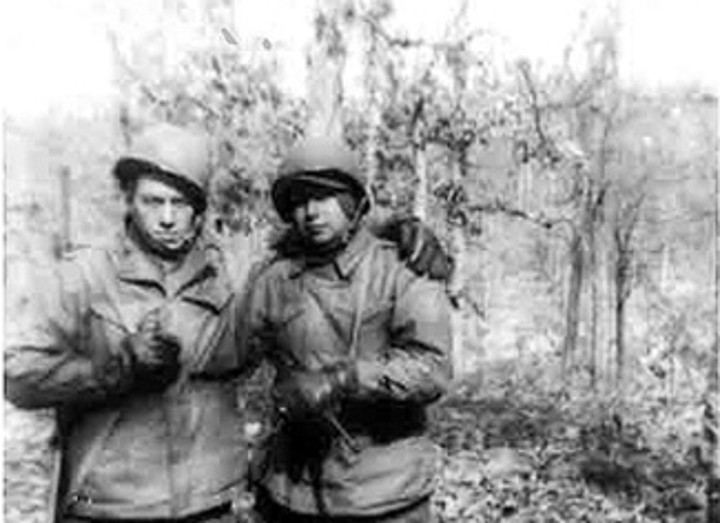 The soldier’s name was Seymour Goldberg, Army serial number 36666036. He was like so many of the anonymous young men – and now young women – who heroically protect our country at home and around this troubled world.

Seymour was also my late stepfather, the one missing at our Thanksgiving meal.

Seymour served with the 23rd Headquarters Special Troops whose existence wasn’t acknowledged until 1996. Called the Phantom Army, or Patton’s Ghost Army, the 23rd was made up of eleven hundred hand-picked men – average IQ 119 – including Douglas Fairbanks, Jr., fashion designer Bill Blass and artist Ellsworth Kelly – some of whom would become famous in post-war America.

According to the National Army Security Agency Association, the battalion’s artistic talents made them the most unusual deception unit in military history at the time. Jack M. Kneece, author of Ghost Army of World War II, called them a “theatrical road company” that confused the enemy with inflatable tanks, sound effects and misinformation. Kneece wrote that the 23rd saved at least 40,000 lives.

Why Seymour Goldberg was picked for the Ghost Army remains one of the great mysteries of my family. I suspect it had something to do with his savant like knack for math. He never graduated from Crane Technical High School, but you could throw a series of numbers at him, ask him to add, divide and subtract and he would always give you the correct answer. 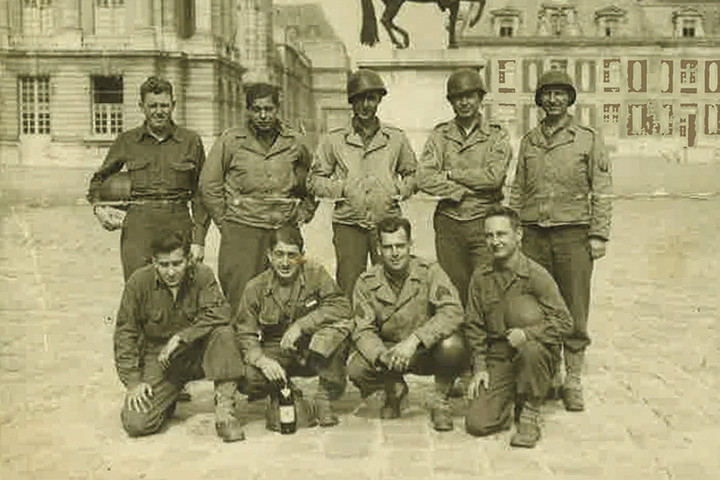 His Army documents reveal nothing artistic in his work experience. His civilian occupation was described as “cook, short order. Broiled steaks and hamburgers. Barbequed meat. Prepared French-fried potatoes. Bought meat and other supplies.”

Seymour worked at Sally’s Bar-B-Q, known for some of the best ribs in Chicago. His special barbeque sauce was legendary, and he took the secret recipe to his grave. An ad in the August 17, 1957, edition of Chicago Welcome said, “Meet me the original Sally’s for the bar-b-q taste thrill of your life.” A few pages later was a picture of a young Seymour, owner Sally Reitman, and a stack of ribs. 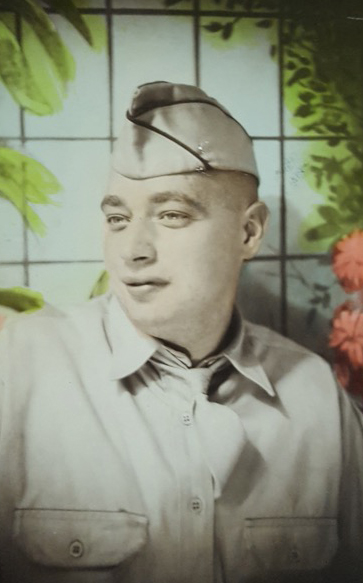 Seymour was a Jew, one of a half million soldiers of that religious faith to serve in WWII. Seymour was often behind enemy lines and came close to being captured once while pilfering eggs from a farm. One can only imagine the delight the Nazis would have had at apprehending a Jewish Allied soldier.

My stepfather was not an overly affectionate man, but there are dozens of faded black-and-white photos of Seymour and other GIs, sometimes with their arms around each other. “Your pal, Mike LaRocca,” is inscribed on one picture of a dashing dark-haired soldier.

After two years, four months, and six days, Private First Class Seymour Goldberg came home around Thanksgiving 1945, mustering out with $156.25, and an honorable discharge. For his duty with the 23rd, Seymour earned five Bronze Service Stars, the European-African-Middle Eastern Campaign Medal, and a Good Conduct Medal.

When he returned there was no parade in his honor. No gift baskets or paid vacations to Florida. Like so many of the Greatest Generation, he simply showed up unannounced at his parents’ three-story walkup on Chicago’s west side. Soon after he began 30 more years flipping ribs at Sally’s Bar-B-Q.

Twenty-seven years later Seymour married my mom and became my stepfather. I was in seventh grade, running the alleys on the South Side of Chicago, and in need of a firm male hand. Seymour took charge of my young life, instilling military-style tough love and structure with a bark that forewarned a bite that I wanted no part of. It wasn’t always easy.

Seymour rarely talked about his combat experience, and he never said a word about the Ghost Army, maintaining the code of secrecy that surrounded the 23rd.

But there were rewards for staying on the straight and narrow. He affectionately called me Chief, and took me to my first White Sox games at Comiskey Park, where we once marveled at a colossal homerun in the right center upper deck by the Twins’ Harmon Killebrew, and to a Blackhawks game at the Stadium, where we stood and cheered when Bobby Hull scored two goals in one period on blistering slap shots from behind the blue line.

For all our time together, Seymour rarely talked about his combat experience, and he never said a word about the Ghost Army, maintaining the code of secrecy that surrounded the 23rd.

When Seymour was sent to Europe, the Army’s National Jewish Welfare Board issued him two pocket-sized books. One of the books was titled “Jewish Holy Scriptures” and includes a short introduction signed by President Franklin D. Roosevelt.

The second book was titled, “Prayer Book – abridged – for Jews in the Armed Forces of the United States.” The preface states, “May this prayer book, small enough in size to be carried above the heart, bear the spiritual message of Israel’s ancient prayers to the heart of the Jewish members of the armed forces serving their country.”

Included in the prayers Seymour carried above his heart were a prayer for moral strength; a prayer on being delivered from danger; prayer for the sick and wounded; and even a deathbed confession.

I can imagine Seymour turning to these prayers at Rhineland, Ardennes, Central Europe, Normandy, and northern France – by moonlight in foxholes, where it is often said there are no atheists.

Judging from the bits of leftover sand and dirt from the European Theater tucked in the binding of the book I can imagine Seymour turning to these prayers at Rhineland, Ardennes, Central Europe, Normandy, and northern France – by moonlight in foxholes, where it is often said there are no atheists.

Two passages are dog-eared. One is the “Morning Service for Week-Days,” short prayers to give thanks for another day. The other is “Prayer for Home.” 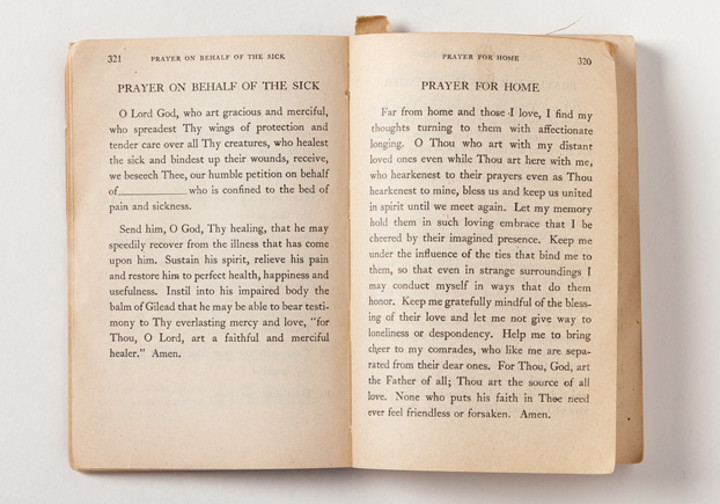 “Far from home and those I love, I find my thoughts turning to them with affectionate longing…Let my memory hold them in such loving embrace that I be cheered by their imagined presence. Keep me under the influence of the ties that bind me to them, so that even in strange surroundings I may conduct myself in ways that do them honor. Keep me gratefully mindful of the blessing of their love and let me not give way to loneliness or despondency. Help me to bring cheer to my comrades, who like me are separated from their dear ones.”

When I read this prayer the dam finally emotional broke on the tears I had been holding back since Seymour’s passing. I called Mom and we cried together. “Now you understand what we have lost,” she said.

And I give thanks for Seymour’s service to our country, and for his service to a snot-nosed kid from Chicago who is still trying to make his stepdad proud.

Stephen J. Lyons is the author of four books of essays and journalism. His most recent book is "Going Driftless: Life Lessons from the Heartland for Unraveling Times."

My Sons Were at Meron
Korach 5782: Visit to Lift the Spirit
That Time The Ivy League Found A Way To Limit Jewish Enrollment
Would You Rather Be Right or Happy?
Comments
MOST POPULAR IN Family
Our privacy policy