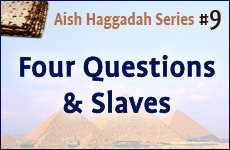 Why are questions so important?

Power of a Question

The Torah commands us to mention the Exodus from Egypt twice each day – once at night, and once in the morning. We fulfill this by reciting the third paragraph of the Shema, which says: "I am the Lord your God, Who brought you out of the land of Egypt..." (Numbers 15:41)

In addition to this twice-daily mention of the Exodus, a primary mitzvah of Seder night is "Maggid" – telling the story of the Exodus. But what is different about the Seder that distinguishes it from the daily obligation to mention Egypt?

The answer is intimated in the verse: "And it shall be when you son will ask you, 'What is this?' you shall say to him, 'With a strong hand God removed us from Egypt..." (Exodus 13:14)

The verse specifically refers to a child "asking." This teaches us that the special mitzvah of Seder night is to recount the Exodus in a question-and-answer format. The very name Haggadah means "telling," for the goal of the Seder is to arouse curious questions, and satisfying answers.

We see that the Seder is based largely on the idea of "questions." The youngest child asks the Four Questions; we wash our hands before eating the Karpas because it is an unusual activity which prompts the asking of questions; the Four Sons are identified by the type of questions they ask.

Why are questions so important?

The Maharal of Prague (16th century Hungary) explains that people generally feel satisfied with their view of life. Thus they are a bit complacent when it comes to assimilating new ideas and growing from them. But when a person has a question, that is an admission of some lack. This creates an "empty space" which now needs to be filled.

Growth begins internally, with a question. Judaism's basic view of education is that nobody can teach anyone anything new. Rather, a teacher conveys information in a way that allows the student to get in touch with what he already knows – and re-discover it on his own.

Got a good question? Ask it at the Seder!

A joke for your Seder table:

A Jewish man is waiting in line to be knighted by the Queen of England. He is supposed to kneel and recite a sentence in Latin.

When it comes his turn, the Queen taps him on the shoulders with the sword – and in the panic of excitement he forgets the Latin line. Thinking quickly, he recites the only other line he knows in a foreign language, which he remembers from the Passover Seder: "Mah nishtana ha-lailah ha-zeh mi-kol ha-leilot."

The puzzled Queen turns to her advisor and asks, "Why is this knight different from all other knights?"

We were slaves to Pharaoh in Egypt. And the Lord our God brought us out from there with a strong hand and an outstretched arm. And if the Holy One, blessed be He, had not brought our ancestors out of Egypt, then we (and our children and our grandchildren) would still be enslaved to Pharaoh in Egypt.

If God had not brought us out of Egypt, is it true that we'd still be enslaved after all these centuries, after all the world's revolutions?! Is it true that Egypt is such a mighty empire today that it can hold an entire nation in captivity?!

If this is not true, then our thanking God for taking us out of Egypt is not genuine, because we would have eventually left anyway. So how do we understand this statement of the Haggadah?

We are accustomed to a world that changes. A government can undergo a revolution, society can undergo a major renaissance. Is it possible that we can change America or the world? The only reason we think it is at all feasible is because we have seen it happen before. Egypt was the first. That experience taught the Jews – and the Jews taught the world – that even governmental "superpowers" are not absolute. Only God is God.

We were slaves to Pharaoh in Egypt; And the Lord our God brought us out from there with a strong hand and an outstretched arm. And if the Holy One, blessed be He, had not brought our ancestors out of Egypt, then we (and our children and our grandchildren) would still be enslaved to Pharaoh in Egypt.

Every human being wants to be free. But "freedom" doesn't just mean voting for your favorite political candidate. Freedom means being in control of yourself and knowing what you really want.

If the Holy One had not brought our ancestors out of Egypt...

The Haggadah is adding one crucial factor: You can't do it alone. Only the Almighty can send wagons barging through. You start things off, but then God pulls you out.

If God hadn't pulled us out, we'd still be under Pharaoh. We'd still be trapped in our body, enslaved to our physical desires.