Four Mood-Elevating Acts of Kindness My Friend Taught Me 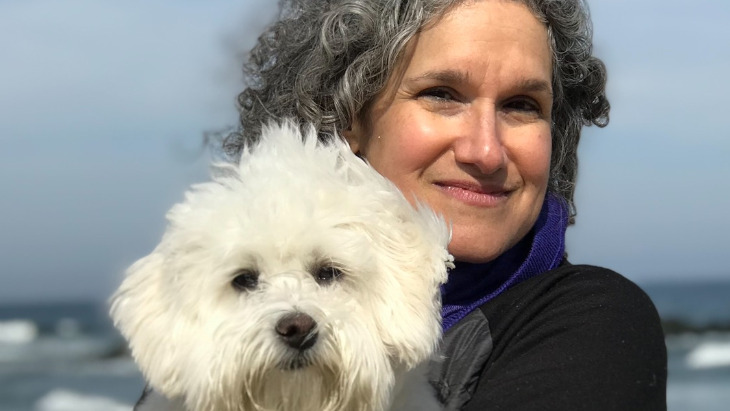 Every now and then, when the yen strikes me to do something nice for others, I’ll call my friend Nancy for inspiration (that's her above, with her dog, Mochy). “Tell me something kind you did today,” I’ll ask.

“Nothing much,” she says.

Below is a smattering of examples on how Nancy spends her day – when she’s not working as a trainer or leading Chair Zumba classes for seniors or shmoozing with any of her eight adult children. (She’s in her fifties.) I chose the four easiest ones that anybody can do and feel so good to do them.

1. Let someone get ahead of you in the supermarket check-out lane.

Especially if you have a boatload of stuff in your cart, and the person behind you has only a couple of items.

Nancy says in all the years she’s been doing this, no one has ever turned her down.

Sure, I’ve let people go ahead of me in the past – okay, maybe twice a year – but now I’m going for it.

I call it a cheap kindness thrill, because for the minor effort you put in, the effect can be pretty dramatic: the expression that comes over the grim-looking matron or the bored put-upon teen, the mouth dropping in surprise, the grin that steals over the face, the bashful nod of thanks, the shift in the atmosphere around you. Just like that: friendly, human.

Sure, I’ve let people go ahead of me in the past – okay, maybe twice a year – but now I’m going for it. Especially before Self-Checkout colonizes every supermarket, and such opportunities won’t be available anymore.

By invisible, I mean the ones you ignore even if you pass them every single day – the mail lady, the crossing guard, the frail man walking his labradoodle, the guy handing out annoying restaurant flyers in front of your office building. The meter maid – is that archaic name still in use? Her too. 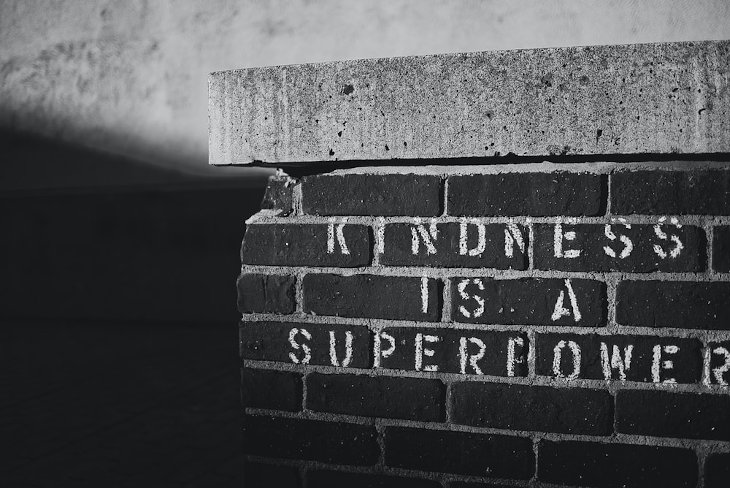 “Because I have my dog with me,” Nancy says, “when I smile at people, they’re less likely to think I’m creepy. Moochy helps me get away with a lot more friendliness. Sometimes I can even throw somebody a compliment.”

I know a South American woman who was walking dejectedly down the road, intent on throwing herself off a bridge. An old man looked at her with concern and gave her a beautiful smile, and she felt it and changed her mind.

Sometimes a smile or hello can have that power.

Say two lanes merge into one, and a car on the outs is trying to wedge itself into your lane. Don’t protect your spot as if your ego intactness or your life savings are at risk. It’s laughable how petty we get, and for what?

Nancy tells me if somebody really wants her spot, she relinquishes it. “I’ve got on my jogging shoes. Who cares if I have to walk farther. No sweat. It’s New Jersey.” (Brooklyn or Manhattan, though, is a slightly different matter.)

Good driving manners are as contagious as bad ones.

She easily lets cars merge in front of her. Why not? “Funnily enough,” she says, “people let me merge to their lane almost all of the time,” which sort of confirms her belief that good energy begets more good energy.

Me, I’ve been working on my driving manners this past year.

When I drive mindfully, zenfully if you will, the road atmosphere starts to shift in a really wonderful way. Good driving manners are as contagious as bad ones.

4. Pick up garbage at the beach.

She started when she was five. Before leaving the beach, her mom would say, “Nancy, clean up around your towel area.”

“So yes, I’ve been collecting garbage on the beach since I was a child. Five decades plus. And I’m still a child.”

Mostly, she picks up garbage barehanded, unless it’s something nasty, and then she’ll just use Moochy’s plastic poop bag to do the job.

I’ve started collecting garbage, too. Totally thanks to Nancy. I figured I’m collecting rocks anyway along the seashore. Would it kill me to also pick up bottle caps, sandwich bags, plastic straws, neon food wrappers and cigarette butts? For 15 minutes? 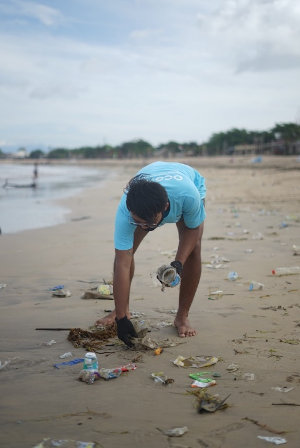 Initially I worried people would think it was weird. Or worse, that I was virtue signaling. But after 20 minutes, I was still plucking up rocks and garbage. I sort of enjoyed it. More than sort of. I felt connected – to the sand I was walking on, to the few people on the beach still there – it was sunset, to the whales I was hopefully saving from needlessly swallowing Styrofoam. People were smiling, at me, at each other. Maybe they even cleaned up garbage they might’ve left behind. The whole experience was such a mood elevator for everyone there, I decided to make garbage collecting a beach habit.

Acts of kindness are the girds under the bridge holding it together, keeping a society sane, civil, whole.

Try it. Just make sure not to glare at the litterers or pride yourself on how humble you are to be collecting garbage.

Acts of kindness have the power to pull us through hard times. They’re the girds under the bridge holding it together, keeping a society sane, civil, whole.

So what do you say? Let’s bring about an atmospheric change through acts of kindness, a kind of positive global warming toward each other. If you have any suggestions of acts that create instant good will and cost next to nothing to implement, please share in the comment section below. Nancy would want to know.

Why Is an Award-Winning Russian Journalist Fighting for Ukraine?
Live Abortion Panel
Morality and Abortion: Three Views
There Are No Limits
Comments