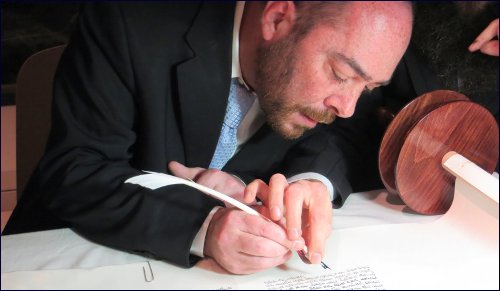 A tribute to one of Aish HaTorah’s most inspirational members who passed away last week.

I only met Eric (Elimelech Dovid) Most, zt"l, in person once. Yet despite that minimal personal contact, when I received the news of his passing last week, at the age of 46, I felt I had lost a close friend. And I knew the world had lost one of its most inspirational figures.

A few days prior to leaving for the States recently, I had written Reb Eric's wife, Naomi Rivkah, "While I met many impressive people in the seven years spent writing a biography of Rav Noach Weinberg, zt"l, your husband was the most inspirational."

My connection to Eric came through that biography. As the project neared completion, the manuscript was given to Eric for proofreading and review. Subsequently, I received back an 82-page booklet, with each change, down to an extra period at the end of a line, listed by page and line. In a quarter century of authoring books, I have never experienced such a meticulous and close reading. 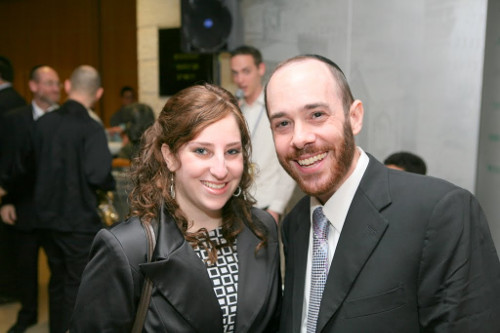 Eric and his wife Naomi Rivkah

It would have been remarkable for anyone. But that a man living in the shadow of death already for a decade could have summoned up the energy for such a task and executed it as he did was, and remains, beyond my comprehension. I wrote him, "I am honored and awed by the effort you put into this task. Anyone else would have just scrawled their comments and corrections on the text rather than laboriously typing out the exact location of each correction."

Eric was far more than a proofreader for me. Though he was a relative latecomer to Aish HaTorah, he possessed an encyclopedic knowledge of Aish HaTorah and its founder, Reb Noach Weinberg. Over the years, he transcribed hundreds of Reb Noach's talks word for word. Even after many of those talks had begun to appear in book form, he felt that there was benefit to be had from the exact words of his Rosh Yeshiva.

He was the gentlest of critics, ever concerned that I should feel no insult from anything he wrote. But his judgment was incisive, and he knew the art of gentle pressure relentlessly applied.

We worked back and forth by email on final revisions for months, until the submission of the final manuscript in January 2017. Eric wanted me to cut the manuscript and to consign more material to appendices. Since each of the sections or chapters under consideration represented a major research project for me, I resisted. But in the end, I wrote, "I feel safe deferring to your judgment."

He made it easy to defer because there could never be anything personal with Eric. He was a truth-seeker, entirely lacking in self-regard. After I sent him a draft of one rewritten section, he wrote back, "I think it's very good. Clear and accurate."

I replied, "It should be accurate, you virtually dictated it." His response was vintage Eric: "I'm not always right. Probably wrong more often than right!"

Having tasted the fruits of collaboration with Eric, I dreamed that he might always be there to perform similar feats of magic on any subsequent works I might write. He was equally eager to collaborate again, and to employ his formidable skills in bringing other Torah figures to life.

By the time I arrived at the Most home to personally express my gratitude for the magnitude of his improvements to the biography of Reb Noach, I already knew how desperately ill he was. Shortly after he was married in 2006, he was diagnosed with lymphoma. Even before then, his young bride, Naomi Rivkah, 12 years his junior, suspected something was very wrong from his constant cough. 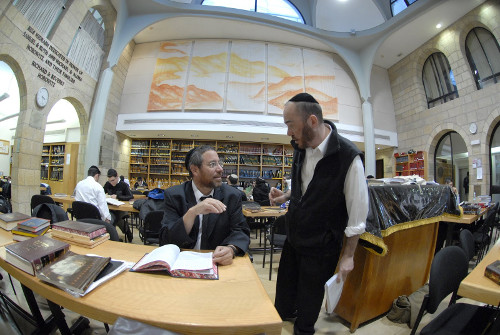 From then on their life together was an endless series of bone marrow transplants, chemotherapy, prolonged hospital stays when his ravaged lungs could no longer draw a breath, and trips to America in the hope of being able to rebuild parts of his body rendered non-functional both by the disease and the treatments. More than five years ago, he went into septic shock and nearly died.

Health updates from Naomi Rivkah to the Aish HaTorah community – carefully edited by Eric – ensured that recipients knew precisely what they were praying for and how much their prayers were needed.

But Eric and Naomi did not let their lives become defined by his health travails. When I reflect on the three hours we spent talking during our meeting, the most striking thing is how small a portion of our conversation touched upon his health.

Other than his apology for being unable to personally serve me something to eat, health was not a subject. Of course, his emaciated and weakened state, ensured that the subject always hovered in the air, especially when he mentioned that he had been a rugby player and marathon runner.

Instead we spoke of Reb Noach, Aish HaTorah in the aftermath of Reb Noach's passing, the book. Our common experiences as ba'alei teshuva and reformed lawyers also provided much grist for the conversational mill.

The eulogies and people at the shiva house all spoke of Eric's genuine interest in others. Most people in his situation, especially over many years of unceasing suffering, turn inward and lose interest in others. Eric, by contrast, constantly turned the conversation to whomever he was with. An email from Eric late last December begins: "Just wanted to say hello. I hope all is well with you and your family." 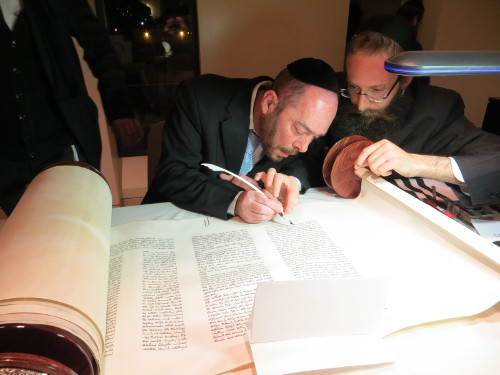 It will be to my everlasting shame that I answered by expressing my frustration over publication delays in the biography of Reb Noach – such a triviality compared to what he faced daily. But true to form, Eric responded by expressing his sympathy. And that sympathy was real. Had I not known that I would not have vented to him in the first place.

Because he never focused on himself Eric had a huge capacity for friendship and to draw others close to him. I was just one of hundreds of beneficiaries of that talent for friendship.

Complaining was utterly foreign to him. As one of the rabbis at his funeral noted, he was the least reliable reporter of his health situation. "A little trying" or "a bit challenging" was the most he would allow himself. After a month of struggling to draw a breath and unable to eat or speak, he flashed the thumbs up sign at a visitor who inquired about his situation.

Reb Noach always called him by the name Simcha, and indeed Eric prepared and taught a 12-part course on simcha (joy) based on Reb Noach's teaching. For Reb Noach being a serious person meant being prepared to die to achieve the mission, and he viewed Eric Most as perhaps his last serious student. Toward the end of his life, Reb Noach told one of his daughters (who related the statement at the shivah house to Naomi Rivkah) that he wanted to give ten years of his life to Eric.

When he arrived at Aish HaTorah, Eric was at the top of the world. He had practiced environmental law, his lifetime goal, with a major New York firm, and was interviewed as an expert in the area by CNN. He had saved enough money to live comfortably for the rest of his life (but for the enormous medical expenses that in time ate away all those savings.)

He gave all that up for a world which he entered as a rank beginner, not even knowing the aleph-beis when he arrived at Aish. Yet he never looked back with the slightest tinge of regret for the life he left behind. His trust in God’s overwhelming love was unbreakable, and his greatest legacy from Reb Noach.

He would in time complete the Aish HaTorah rabbinic program, though he was prevented from taking the exams by the necessity of another round of bone marrow transplants. And he would teach Torah as well, through his involvement with the Jerusalem Discovery program and the numerous Aish programs for visiting students and young adults from abroad.

Eight years ago, he and Naomi Rivkah created a program for American seminary girls called DestinAISHons that meets on Motzaei Shabbos every other week. At its peak, it attracted 150 young women to each session to learn Reb Noach's approach to translating abstract Torah concepts into a living connection to God through concrete daily actions.

Already three years ago, Eric could no longer teach in person. But he insisted that Naomi Rivkah carry on without him. "That's my legacy," he told her. "It must continue."

Whatever strength he possessed – whether it was enough to work for two hours or two minutes – was focused on the mission. In his eulogy, Rabbi Yitzchok Coopersmith related how he once visited Eric and found him unable to stand. Two hours later, he received an email with three transcribed talks of Reb Noach on the Torah portion. Rabbi Nechemia Coopersmith was equally astounded to receive an email from Eric just two weeks before his passing reminding him that he was to speak for DestinAISHons that Motzaei Shabbos.

None of this would have been conceivable had Naomi Rivkah not accompanied her husband as a full-time care-giver every step of the way. Listening to her share her joy in their partnership, including their three young children, as she spoke almost non-stop for hours at the shiva house, one could not help but come away feeling uplifted.

Here was a Jew who used every ounce of strength he had to increase God’s presence in the world. His primary doctor, a non-observant Israeli named Sigal, incorporated into her treatment the knowledge gained over the years that "Eric lives above the natural order."

And when he passed from the world, he did so knowing that he was enveloped in the love of God, his wife, and all those whose lives were changed for the better just for having known Elimelech Dovid Most.

May his memory be a blessing.

Reprinted with permission from Mishpacha Magazine.

Orphan Girls in Calcutta and the Meaning of Thanksgiving

A 75-Year Wait for Kaddish