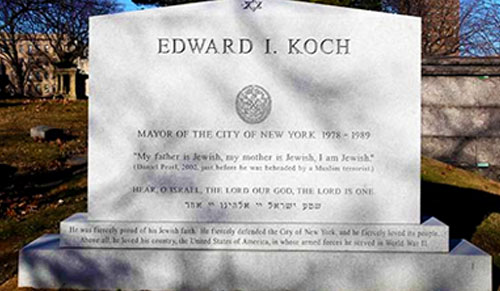 With the words he chose to be inscribed on his tombstone, Ed Koch, the iconic New York Mayor who passed away last Friday, made it very clear how he wanted most to be remembered.

And they reminded me of a family disagreement in which I had to acknowledge that I was wrong and my daughter was right.

It was a number of years ago when my daughter Tamar was making plans to apply to law school. Having gotten a perfect score on her LSAT exam, the highest mark in the country, she wasn’t nervous about getting accepted at one of the top universities. But she knew that an important element that would be considered by the very best schools was the essay she had to submit explaining why she had chosen law as a career and defining herself as a person.

When she told me she had finished writing it, I asked if I might see it. As I began to read it I found myself filled with apprehension. Her opening words were “I am an Orthodox Jew.” She continued by linking the Jewish love for law with its divine origin at Sinai. She explained that her love for Torah made her seek a way to seek the betterment of the world through a commitment to legal redress for the innocent and lawful punishment for the criminal.

Her presentation was masterful, yet I was afraid. Afraid because I was part of a generation that still bore the emotional scars of centuries of anti-Semitism. Afraid because I had lived through the years of the Holocaust and been forced to leave the land of my birth when a Nazi takeover threatened. Afraid because even though I now live in “the land of the free” I still didn’t feel free enough to believe that my daughter could openly identify herself as an Orthodox Jew without subjecting herself to prejudiced repercussions.

“I don’t think you should send the essay in the way it is,” I advised my daughter. Tamar thought about what I said. Respectfully she concluded she had to be true to herself. She decided that if by identifying herself through her faith she was closing the door to professional advancement, she would rather not enter those portals. “And who knows,” she added, “perhaps the fact that I take pride in my heritage will be viewed as a positive.”

Yes, my daughter did get accepted to every one of the top law schools in the country. Now fast forward a decade to learn the real end of the story. I was teaching a class at Yeshiva University when a young man knocked on the door. I immediately recognized him as a former student. Out of breath, he told me he rushed up from Columbia University Law School because he had to share the story of what had just happened in one of his classes.

The conversation had turned into a discussion about the required essays. Someone asked the professor, “Now that we’re in the school, can you tell us what exactly you were looking for in those essays?” The professor responded that he couldn’t really put it into words but he could only give a general guideline by referencing what he felt was the best essay they had ever received. He recalled that it was written by some girl with a strange last name that’s difficult to pronounce – “something like Blech.”

“If this is your daughter,” my former student said, “I knew you’d love to hear the story.”

I assured him that indeed it was my daughter, and that I was so grateful to him for sharing it with me. I also confessed how I almost messed it up by suggesting to my daughter that it was too dangerous to be submitted as written!

If taking pride in one’s identity proved to be helpful rather than hindrance to Tamar, it is certainly instructive to learn how much this trait meant to the former Mayor of New York city.

As the eulogies are offered and the tributes pour in with a lengthy list of Ed Koch’s accomplishments, there are so many things the mayor could have been proud of. Yet what Koch chose to stand in perpetuity as a summary of his life’s meaning were the last words of Daniel Pearl before he was brutally murdered by Pakistani terrorists: My father is Jewish, my mother is Jewish, I am Jewish

Two years before his death, in his personal blog in the Huffington Post, What’s On My Tombstone And Why, Koch told his readers that this was what he had prepared to be inscribed as his epitaph. So strongly did he feel about the importance of this recognition for every Jew that he added, “I believe those words should be part of the annual services on the Jewish High Holiday of Yom Kippur, and should be repeated by the congregants”.

Beneath this powerful expression of identity, Koch commissioned the inscription of the Shema in Hebrew and English followed by these words: "He was fiercely proud of his Jewish faith. He fiercely defended the City of New York and he fiercely defended its people. Above all, he loved his country, the United States of America, in whose armed forces he served in World War II."

Koch did not hesitate to define himself in this sequence – a proud Jew, a loving New Yorker and a patriotic American.

In accord with his wishes, the words by his grave express with pride the last words of Daniel Pearl.

Is it merely coincidence then that Ed Koch died on the first day of February, the very day on which Daniel Pearl was murdered exactly 11 years ago? 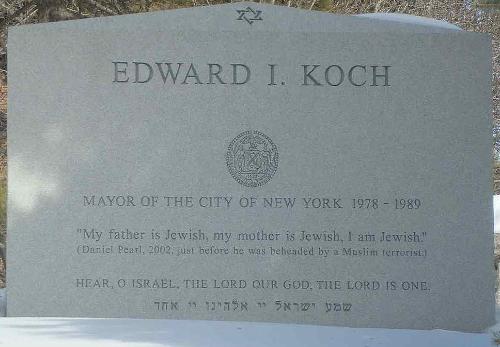