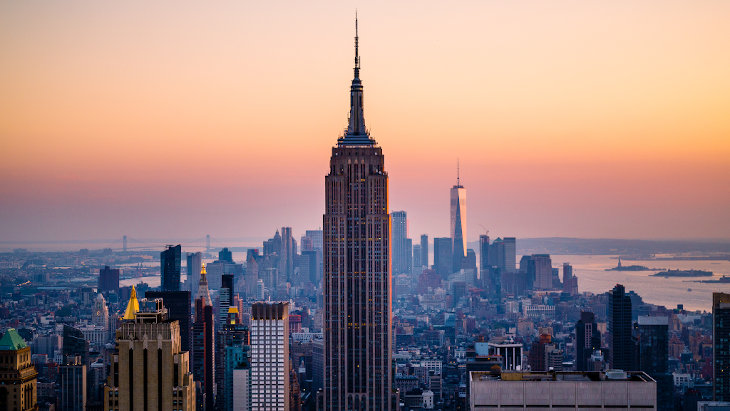 Blowing my shofar to our suffering city from my balcony.

Every night at 7:00 PM for the past several weeks, New Yorkers cheer from open windows and balconies for our essential workers -- healthcare, grocery, sanitation, and transit workers. I often go to the balcony, hoot and yell, and bang a pot and lid. The pot-banging annoys my husband and 11-year-old son. Sometimes I sing out as I saw a woman do in a video during the Italian stay-at-home order, before we had our own: "C’e la faremo!” We'll get through this!

The cheer lasts anywhere from 3 to 7 minutes. Occasionally we're on the street at this time, which is a heartening experience. You hear the cheer coming through the canyons of buildings. Once I saw a stopped FedEx truck driver beeping his horn as part of the cheer. I later realized: he is an essential worker too!

On April 29th, a more organized musical event was planned to honor our essential workers, with tasks assigned to real musicians and lay-people alike. Named “For Our Courageous Workers” and billed as a city-wide symphonic fanfare, it consisted of four 3-minute-long sections.

“Cheering” took place from 7:00 to 7:03, when lay-people were assigned to clap, cheer, and bang on pots and pans. During “Reflecting” lay-people were asked to just breathe, listen, and reflect for 3 minutes. “Catharsis” sounded from 7:06 to 7:09, as everyone was tasked with playing anything in a full-blown, glorious, jubilant, ecstatic, cacophonic, sonic catharsis. And the last section was “Gratitude” when we sang “Ah.”

I was into this and just before 7:00 PM went to my balcony equipped, including my iPhone to accurately time the various parts. I waved to building neighbors on their balconies. At 7:00 PM I hooted and banged my pot and lid – one among many cheering. I experimented enthusiastically, banging the lid on different parts of the pot, making various tinny sounds ring out. When the iPhone struck 7:03, I stopped.

The cheering from my fellow citizens started dying down. And then the city became silent, and I quietly reflected, as suggested, awaiting the next phase.

7:06 came. Minutes earlier before heading to the balcony for this musical event, I had searched the apartment for anything capable of making a sound and grabbed a plastic shofar my son got in Hebrew school. Now I lifted the shofar to my mouth and began to blow. I expected that my sound would be indistinguishable amidst a great cacophony. But I was the only one. Apparently, no one got the memo — literally. Or maybe no one cared about the memo. Even my neighbors to whom I had waved, whom I actually had sent the memo, no longer participated. I was out there alone.

So instead of just tooting haphazardly, I blew that shofar the way it is supposed to be blown — as I remembered from many Rosh Hashanahs and Yom Kippurs. Several times, until 7:09, I blew the traditional sequence of sounds: Tekiah (1 long blast); Shevarim (3 shorter blasts); Teruah (9 staccatos); Tekiah Gedolah (1 very long blast as finale).

I wondered about the souls behind the countless glass panes, and sensed the communal hope and longing that the shofar’s call represents.

Seconds passed and still no sound other than my own was heard. I hoped that someone would decide to join me, perhaps another shofar, because we live on the Upper West Side where there are a lot of shofar-carrying members of the tribe. But no one did.

I was alone, blowing my shofar to our suffering city from my balcony. And it meant a lot to me. As I blew the shofar, I felt the memories of family members and our war-torn history. Those who had experienced so much uncertainty, difficulty, and horror, and yet survived, were there with me at this difficult time in my life. And those who had not survived were present too. I was in good company and not alone.

I heard and heeded the shofar’s call to recognize something and some purpose greater than our individual selves. I looked out at the windows of the nearby buildings, wondering about the souls behind the countless glass panes, and sensed the communal hope and longing that the shofar’s call represents.

And I was exhilarated. When else would I stand on my balcony and blow a shofar to my beloved city?

Watch this short clip from "For Our Courageous Workers"

Caught in the Middle

My Death Sentence
Why My Iranian Mother Didn’t Want Me to Become a Religious Fanatic
The Jewish History of Prague
Why the Sexual Revolution was Bad for Women
Comments
MOST POPULAR IN Current Issues
Our privacy policy
Aish.com Is Looking for Great Writers