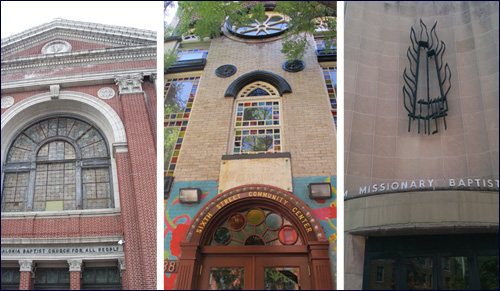 Photographs and history of shuls that have been turned into churches and community centers.

On my birthday in 1999, I drove around Flatbush, the Brooklyn neighborhood where I spent my early childhood. I stopped by my first synagogue, Shaare Torah, and saw that the building had been turned into a Baptist church. I was surprised, and snapped several photographs of the building, its exterior displaying a jarring mix of Judaic and church symbols.

Then I drove a few blocks southeast to find my mother’s and aunt’s childhood shul, Kesser Torah, and saw that it too was now a church. Noticing a pattern, I shot more photographs. At home later that day, I mentioned these two buildings to my parents and asked them if they had known about these interfaith changes to the shuls; they both looked embarrassed and weakly nodded their heads. They had been aware of this but had kept quiet about it.

Then in 2003 I drove through Brownsville, Brooklyn and spotted a handful of former synagogues that had become churches. And I recalled seeing another one at the northeastern edge of East Flatbush. Seeing these buildings haunted me: were there more of them? What was their history? When did they cease serving the Jewish community and get changed into churches?

In the mid-2000s I started to research these buildings, which I first referred to as “ex-shuls” but soon dubbed “lost synagogues,” reflecting the fact that they were buildings that still stood but morphed from synagogues into other things. And I soon found out that while many in Brooklyn had become churches, some in other parts of New York City had become private residential homes, schools, medical facilities, restaurants, and even a museum.

Fascinated by these buildings, I began a serious study. I headed to libraries and archives in New York City. People steered me toward a treasure trove of information at the New York City Municipal Archives, where a Great Depression era survey of Houses of Worship, conducted in 1939 and 1940, listed hundreds of synagogues in the five boroughs. Searching through several reels of microfilm, I found names, addresses and information about synagogues in NYC, many of which were closed. I also looked into other resources such as the Department of Finance, where I could find out the physical dimensions and monetary values of these buildings.

I drove and walked around neighborhoods in Brooklyn, and later the Bronx, Queens, Manhattan, Staten Island and even Governors Island, to track down, photograph from the outside (and often the inside) these buildings, and ask current tenants about what they knew of the buildings’ pasts. Along the way I exhibited more than twenty photographs of these lost synagogues at the Brooklyn Historical Society, and then got up the courage to approach book publishers about turning my research into a written work. I connected with Avotaynu, which publishes books and journals on Jewish genealogy and history, and over a five year period I wrote three volumes on this topic.

I am still passionate about my niche subject, these 300-plus lost synagogues of New York City, and have since investigated them in other cities. Why has this topic held such fascination for me, and as I have discovered, for many other people?

There is the sense of documenting Jewish history so that it is not forgotten. These buildings were so precious to Jewish congregations, which then moved or disbanded for various reasons, and I wish to make them known. These buildings often still feature Stars of David, Hebrew writing, stained glass windows and plaques with Jewish names, as well as Aron Kodesh (holy ark) doors, and other items. In addition, I have long been interested in architecture and decorative arts, so these buildings are appealing to me.

Many people are drawn to this bittersweet topic for a few main reasons: nostalgia, a desire to learn more about the American Jewish community and its patterns of migration, curiosity about who now occupies these sites.

Let’s take a look at a handful of these buildings and learn a bit about their past… and present. 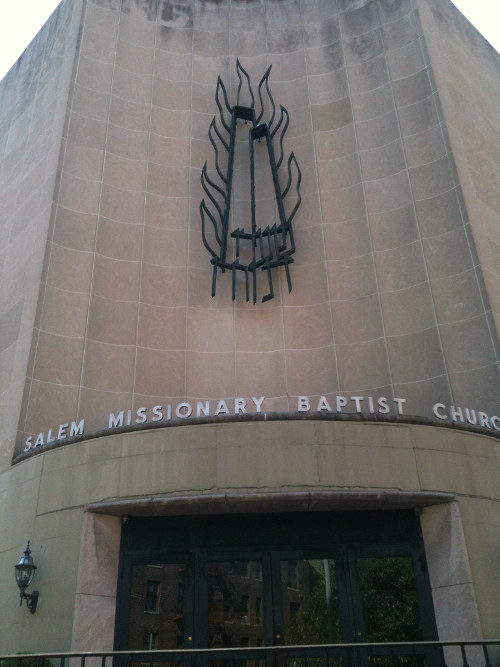 This former synagogue in Flatbush got me started on my whole project. The exterior still displays an unusual metal sculpture by Ludwig Wolpert, which reads “Shaare Torah” in Hebrew. It also shows the name of the current occupant, Salem Missionary Baptist Church. The Conservative congregation had an older building a few blocks away, but that was knocked down and a public elementary school built on the plot. This building seen here dates to the early 1950s but by 1979, with a dwindling congregation, Shaare Torah merged with the East Midwood Jewish Center a few miles south of it.

This building is still in beautiful shape and the church has preserved other Judaic items such as the ark doors, chandeliers, sconces with Jewish designs, and more. 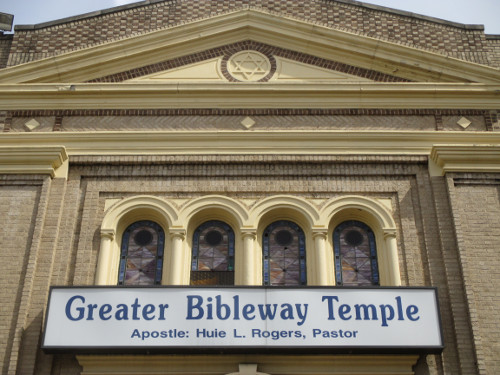 Although Crown Heights in Brooklyn is heavily Jewish (and Hasidic) there are surrounding neighborhoods that were Jewish enclaves, but no longer. This applies to northern Crown Heights-Weeksville. Built as Congregation Petach Tikvah, this was a large Conservative shul that still has Jewish stars on the outside, but nothing left of Jewish interest inside. 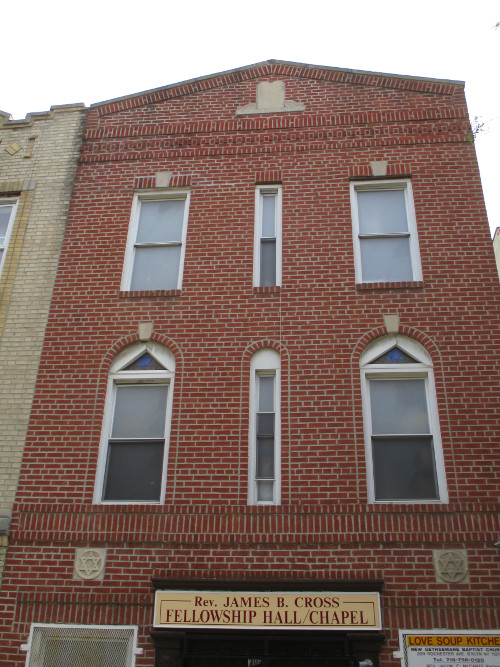 Just a few blocks north of Petach Tikvah, was a more modest, yet pretty synagogue called Ahavath Reyim. It has been used as a secondary building by a church. However, there are some very interesting Jewish items inside: plaques in Hebrew and English, stained glass windows, and most unusual, an intact mikvah in the lower level of the building. 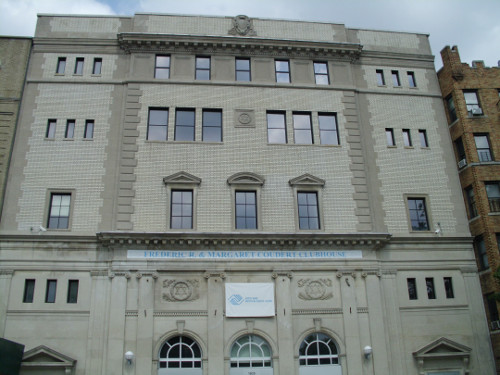 The Bronx had many neighborhoods that were heavily and actively Jewish, but now only a few parts in the north are Jewish. This Orthodox, University Heights synagogue was known as Hebrew Institute of University Heights, but in the early 1970s the congregation relocated northward, and is now known as the Hebrew Institute of Riverdale. This building was decaying but then the Boys & Girls Club bought it and renovated it. It looks wonderful now, and offers a variety of classes and clubs to children. 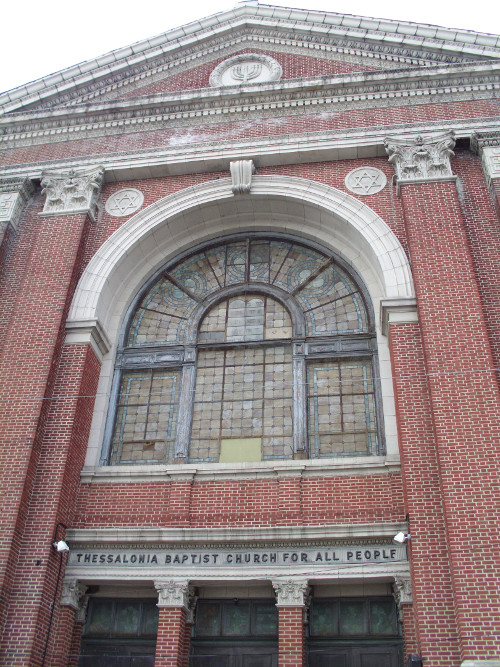 The South Bronx hit scary depths in the 1970s and 1980s, but is now being rehabilitated. This had been built as Sinai Congregation and has been kept in decent shape by a church residing there now. However, age has faded the 10 Commandment windows seen here. 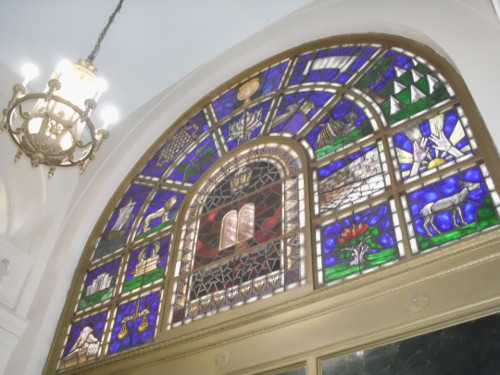 The Grand Concourse is perhaps the best known street in the Bronx, a boulevard with many striking apartment buildings as well as former synagogues and other houses of worship. These gorgeous windows are in the last former home of Temple Adath Israel, now used by a Seventh Day Adventist church. These windows and many other items are still kept in fine shape. Some members of this congregation moved north to Riverdale and established a congregation there. 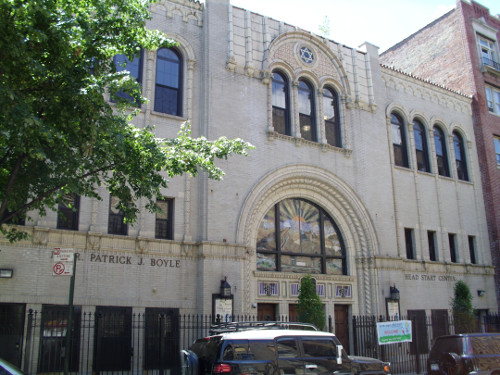 The former Moshulu Jewish Center, on a quiet side street in the Norwood section of the Bronx and just blocks away from the renowned New York Botanical Garden, has been repurposed as an early childhood school. The exterior still boasts handsome examples of Judaica. 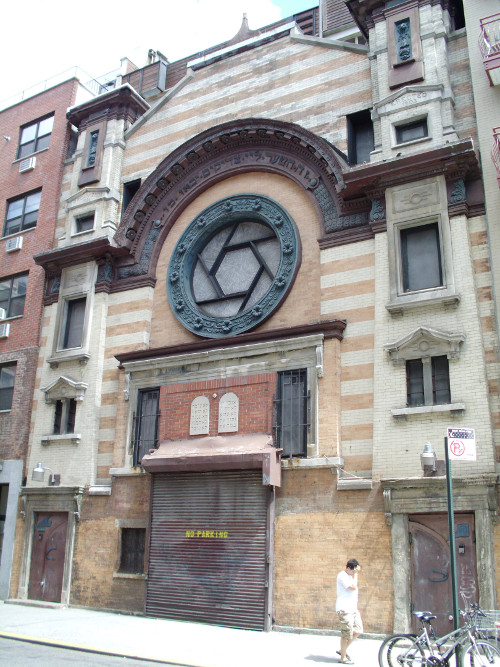 The Lower East Side is a world-famous, legendary neighborhood of American Jewry. This was an eclectically styled synagogue in the area, designed by noted (Jewish) architect Emery Roth. It was built as Congregation Erste Warshawer, and later occupied by Adath Jeshurun of Jassy. But in the 1970s this congregation was on its last legs. Eventually it closed, and now it is a private home and studio. Originally there was a pretty dual staircase but that was removed, and the Jewish star in the round window was modified to resemble a camera lens. But there is still much to identify it as a Jewish site. 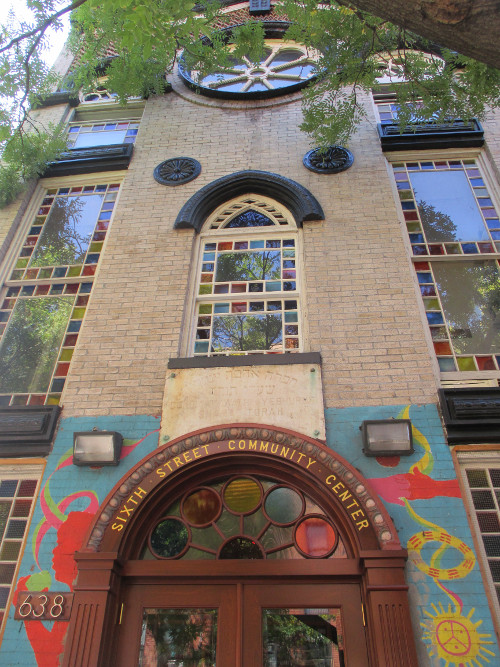 The East Village also was a heavily Jewish area, located just north of the Lower East Side. On East 6th Street between Avenue B and C, there are two lost synagogues side by side. The one at #636 became a church after it closed, but this one at #638 is now the Sixth Street Community Center. It has congregational plaques still on the walls inside. People come here for yoga classes, to eat at a vegetarian café, and other secular activities.

Lost synagogues can be found in many American cities and towns, as well as in Canada, Europe and elsewhere. What makes the situation different in the United States as opposed to areas in Europe where Jews were forced out is that the patterns of demographic change have occurred for more or less voluntary reasons. “Upward mobility” sums this up. Many Jews wanted to move to “better” parts of New York City, or to the suburbs, and so on. But we should not forget these buildings, which were so precious to our older generations. It has become my mission to document them and make sure we preserve them and their memories as much as possible.

Ellen Levitt is a veteran teacher and writer who is a lifelong resident of Brooklyn, New York. She, her husband and daughters are members of the East Midwood Jewish Center in Brooklyn. A link to her books on the Lost Synagogues is here: Jewish Genealogy Books Available Through Avotaynu

In Search of Aaron Sofer

Kristallnacht: Murder by Euphemism
Don’t Believe in Other Gods Versus God is One
Seeing Without Eyes
Why Shouldn’t We Eat Whatever We Want?
Comments
MOST POPULAR IN Israel
Our privacy policy
Aish.com Is Looking for Great Writers