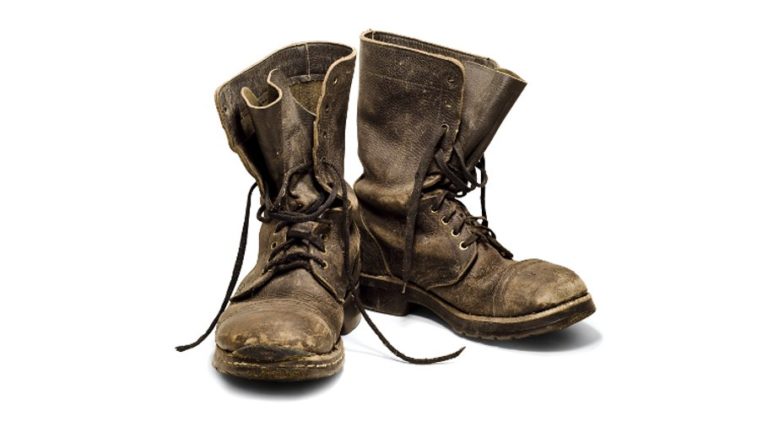 In Israel, I encountered a platoon of new soldiers, exhausted from a training drill. Inexplicably, I couldn’t keep my eyes off their boots.

I recently returned from the Men’s JWRP Trip. There were close to 200 participants from all over the United States and Canada.

Israel is a magical place and every time one visits, something out of the ordinary happens. There are the things or events, sometimes big and sometimes subtle, that bring on a surge of Jewish pride or tears to the eyes. I had one of those moments in a most unexpected place, in a corner of Israel that I will probably never again visit.

Early on during the trip, there was a wedding of the daughter of a good friend taking place in Caesarea. Caesarea is an amazing ancient port city during Roman times famous for its Roman amphitheater. We were up north at the time visiting the holy city of Tzfat and heading south to Jerusalem late in the afternoon. Elad, our guide arranged for me to hop off the bus at the town closest to Caesarea so I could cab it to the wedding. That’s how I found myself at the local mall in Yokne’am at 4:15 pm with about an hour before my prearranged cab would arrive.

You never heard of Yokne’am? Me neither.

The modest mall there is identical to the other small city malls you will find in Israel. A zigzag shaped place with the requisite food establishments, stationary store, luggage store, grocery store, etc. I walked about the place, wheeling my carryon luggage which had my suit and change of clothes for the wedding, clearly the only American-looking bloke in the whole place.

After surveying the shops for about 15 minutes I holed up in a falafel/shawarma joint to recharge my phone, get a drink and rest a bit from all the stair-climbing I did earlier in the day in Tzfat. As I sat there drinking my Prigat Eshkoliyot/grapefruit drink, a bunch of young soldiers began to file in and line up to order their late lunch or early dinner sandwiches.

By the looks of it, I assumed they were fresh recruits in basic training. They seemed very young, not in the best shape, and certainly not an elite unit of buff, tough young men we met later on in the trip. My guess is they were maybe six months into their three-year stint and they came in all shapes and sizes and colors.

They must have just finished some exercise or training because they were tired, dirty and some had black smudge on their face. And they just kept coming. First five, then another group of seven or so, then another. At any given time there were about 20 of these fellows standing across from me lining up as if in a cafeteria for their grub.

And as they stood across from me, I couldn’t help but focus on one thing – their boots. No matter how much I looked at this group of teenagers, my eyes kept drifting downwards toward their boots. I just couldn’t take my eyes off of their boots. They all were wearing the same army-issued black boots and every one of them had the dust of basic training on them. For 15 minutes or more I was somehow mesmerized by these dusty boots.

And then it hit me. In my mind, I contrasted this footwear it to the collection of shoes one sees at Yad Vashem, or the piles of shoes in Auschwitz or at the United States Holocaust Memorial Museum in Washington. The shoes of those poor souls – countless men, women and children – who went to their deaths and never wore those shoes again.

Those army boots were a proclamation to the world: “You aren’t going to mess with the Jewish people ever again!

And all I could think of when I looked at these army boots was that they were a proclamation to the world: “You aren’t going to mess with the Jewish people ever again! The days of our marching to our death are over.” Those dusty boots became something much more than mere footwear. They became the symbol of how far we Jewish people have come and how far God has brought us in a mere two generations.

We recently read the Torah portion of Lech Lecha where God first speaks with Abraham. Lech Lecha means to go, to walk, to move ones feet. Abraham was told to leave his land, his birthplace and his father’s house and to walk to the Promised Land. He picked up his feet, walked through the dust of foreign lands and planted them in what became our homeland. And with that walk he removed the shoes that walked to Auschwitz and replaced them with the boots that defend our land, our people and our values. He discarded the shoes soaked with the dust of death of Poland and replaced them with boots smudged with the dust of life, with the dust of hope and of self-defense and of being God’s people in the land that God promised us.

If you haven’t ever been to Israel, or have not been in a while, its time. It’s time to walk in that land and have its holy soil and dust on your feet. Lech Lecha – go there.

Praying for My Soldier
Where Are We? The Body, Brain, Soul Problem
Dr. Sheila Nazarian’s Escape from Iran
The Miami Boys Choir is Taking over TikTok
Comments
MOST POPULAR IN Israel
Our privacy policy
Aish.com Is Looking for Great Writers