How Rebbetzin Jungreis Changed My Life 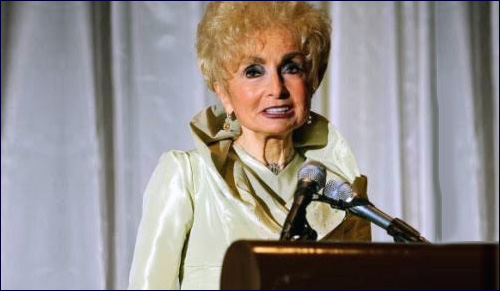 Now it’s our turn to help her.

Can a book change your life?

One book changed mine. Years ago, I wandered into a bookstore with a young doctor I'd recently started dating. He picked up a volume from a table marked "new releases" and gave me his first gift, The Committed Life: Principles of Good Living from our Timeless Past by Rebbetzin Esther Jungreis.

As I flipped the pages, I experienced a curious feeling that I was making a new friend. Soon, I longed to meet the people populating the chapters, to be a part of the large, loving community the book described.

Esther Jungreis introduced herself on the page. The scion of a prominent Hungarian rabbinic family, as a child during the Holocaust she was imprisoned, with her parents and siblings, in Bergen Belsen. After surviving those unfathomable horrors, the Jungreis family moved to New York, where they dedicated themselves to rebuilding the Jewish community they'd lost and to helping American Jews learn about their heritage. Rebbetzin Jungreis founded the Hineni educational center in New York in the 1970s, and helped teach generations of Jews eager to learn about their heritage. Reading each new chapter about her life and work, how I yearned to be a part of her world.

One of my favorite chapters began with a cry of "Rebbetzin!" A young Hineni student's fiancé had jilted her, and she phoned the rebbetzin late at night. Without a second thought, Rebbetzin Jungreis drove over to her apartment and comforted her. There was no one I knew who would drive over to help me out at a moment's notice like that. Despite all the wonderful things that were happening in my life, I recognized I was reading about a world that offered things I'd never had – bonds of love and friendship and a depth of responsibility that I'd never truly known.

In another chapter, Rebbetzin Jungreis described a young woman she counseled, someone who seemed uncomfortably like me. Unable to commit to marriage or anything else, the woman she described said the only thing she was able to make a commitment to was a cat. I put down the book and looked around my apartment, a new awareness creeping over me. I didn't even have any houseplants, I realized, so wary was I of taking on anything I had to commit to nurturing long-term.

Slowly, with the guidance of this remarkable woman I'd only met in print, I started making some changes.

I finished reading The Committed Life, then immediately read it again. Living in a new city knowing few people, the book seemed to give me a sense of community that I didn't have. Many of the vignettes in the book described people who were alone and I relished reading how the Rebbetzin helped them with a supporting word or piece of advice.

Slowly, with the guidance of this remarkable woman I'd only met in print, I started making some changes. I made giving tzedakah – charity – a bigger part of my life, and enjoyed the feeling that I could help others. Inspired by the Rebbetzin's example, I started making a habit to reach out to my family more, phoning and visiting. I started praying with more intensity, unafraid to ask for the things I really hoped for in life.

My greatest evolution, perhaps, was how I looked at the biggest commitment of all: marriage. By now, the doctor and I had known each other for months, and he was eager to set a date for a wedding. I'd never pledged myself to anything permanent before in my life and couldn't imagine doing so now. Rebbetzin Jungreis' book came to the rescue.

In her opening chapter, she describes her beloved husband Rabbi Meshulem HaLevi Jungreis, "a paradigm," she beautifully writes, "of commitment in public as in private life, in war as in peace, in health as in illness, in life as in death. His dedication never faltered. In forty years of marriage I never heard him utter an unkind word, raise his voice, or lose his temper. He was a true reflection of his name, Meshulem, which in Hebrew means 'complete,' and indeed, he was a complete man."

Here was a world with different values to any I'd ever known: a world in which people were judged on their deepest merits, a world in which people strove to grow, to help others, to make a difference – in which they tried to fulfill their fullest potential. How I longed to be a part of it! I knew my now-husband was a wonderful person and Rebbetzin Jungreis' words and example somehow gave me the courage to say "Yes," to look forward to marriage not as a source of constraint, but as a chance to grow.

Rebbetzin Jungreis' books have accompanied me over the years as I've made my own commitments to having a family and embracing a community. I felt she was a friend, always there, cheering me on.

From time to time, I thought of reaching out to Rebbetzin Jungreis, even visiting her Hineni Center in New York, but life was always too busy. I knew she often gave public talks, but in those years of early marriage and motherhood, I could never find the time. Then one day I saw an ad: Rebbetzin Jungreis was going to be speaking around the corner from my home. This was too good an opportunity to miss. I picked up my beloved books by her and went to her lecture, planning to ask her to sign them afterwards.

It was thrilling to see Rebbetzin Jungreis and hear her speak. By the end of her lecture, tears were rolling down my cheeks. Afterwards, clutching my books, I got in line, ready to meet her and tell her that her writing had changed my life.

I never did get those books signed. The line took hours. As it snaked around, I got a chance to hear what everyone in front of me was saying. "Rebbetzin, your books changed my life." "Rebbetzin, your words gave me hope." "Rebbetzin, I don't know what I'd have done without you." Rebbetzin Jungreis had enriched us all.

By the time I finally met the elderly Rebbetzin, she was clearly exhausted. I looked into her twinkling eyes and smiled. "Thank you," I said. "Your books changed my life." She smiled warmly back at me. I didn't want to make another demand on her time. Picking up my precious books, I slowly walked home. I'd thanked Rebbetzin Jungreis at long last.

In the past few days, I, like countless others touched by her work, received a worrying note in my in-box: Rebbetzin Jungreis hasn't been feeling well the past few weeks and needs a refuah sheleima. After so many years of benefiting from her wise words and caring example, we now have the chance to come to her aid in return. Please pray for the complete recovery of Esther bat Miriam. Take on an extra mitzvah: commit to studying a Jewish text, to lighting Shabbat candles (or, if you are already used to lighting candles, light them early this week in her merit.) In Rebbetzin Jungreis' own words from The Committed Life: please "storm the Heavens with our prayers."