Does Being Religious Help You Get a Job? 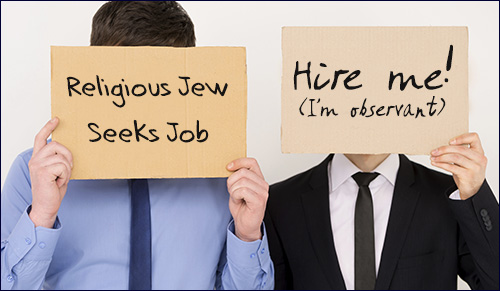 In or out of Hollywood, it sure is a good question.

In case you’re still reading, let’s take a look at some examples from my checkered past working inside and outside Hollywood for an answer.

It’s 20 years ago and my writing partner and I are taking a meeting with one of the biggest producers in Hollywood – a man with a string of successes in movies, television, and music, with a stable of A-list stars. He’s put the word out that he wants to do a show about a Jewish family, and we’re there to pitch him a concept for it. It’s a little hard for us to do the look-‘em-in-the-eye-and-make-‘em-laugh routine that we’ve perfected, since he’s taking this particular meeting from the bathroom.

That’s correct. After the initial hand-shaking and some folks-we-have-in-common pleasantries, we’re a couple of minutes into our pitch and he stands up and walks away, saying over his shoulder, “Keep going, I’ll leave the door open.”

I didn’t want to be responsible for another cringe-worthy portrayal of Jews in the media.

Let me interject that I already had reservations about this project. I didn’t want to be responsible for another cringe-worthy portrayal of Jews in the media, when I knew that despite our best efforts studio and network executives, actors, and other evil people would add their distorted spins. But my partner prevailed with a good argument: how much worse it might be if someone who wasn’t religious wrote the script and threw in a lot of ignorant claptrap. Besides, there was a high probability a pilot would be shot and it could turbocharge our careers. I was sold.

So now we’re in a meeting with a man in a bathroom. My partner and I exchange a look – when you’ve worked together as long as we have, most communications are telepathic – and we keep on pitching, only louder. As we’re shouting setups and punchlines, we hear running water. We just shrug at each other and keep going.

(We’ve become jaded to weirdness. Once, we had a meeting with one of the creators of “The Simpsons,” at which the guy laid on his couch with an arm over his eyes, complaining of a migraine, that he wasn’t up to talking, and could we just tell him all about ourselves? So we talked for about 20 minutes, with not a sound or a movement from the guy no matter how animated or funny or moving or – eventually – desperate we got. After a particularly long and excruciating silence, it was clear he was asleep, and we tiptoed out. We didn’t get the job, but I now have his Emmy on my mantle.)

Back in the bathroom meeting, one of us throws out a funny line. We hear the producer laugh (a good sign) and the water stops. The producer yells, “I like it!” We give each other a tepid thumbs up, but we’re both thinking, What does he like, the concept or taking meetings from a bathroom?

He comes back into the room, wiping his hands, and says, “Boys, tell me something. Are you both Jewish?”

My partner and I glance at each other from the corners of our eyes – can we possibly answer this question? You see, at that point in history, there were only four broadcast networks, competition was fierce, and the number one rule in Hollywood was, don’t say or do anything that can lose you a job. And since Jews (mostly) ruled Hollywood and those Jews were (mostly) securely secular, and being religious was anathema, you just didn’t go around blabbing your shul attendance. We always played it down – wore baseball hats to keep our heads covered, ate salads for lunch to keep kosher, and avoided casting sessions involving anything in a bikini.

We answer as one. “Of course!”

“How often? Everybody goes to shul on the High Holidays.”

Uhhh. “You know, every week. Pretty much. Sometimes more. Sometimes less. It’s a lunar calendar, so it’s hard to say.” He seemed to be satisfied, and we breathed an inward sigh of relief.

Now, we’re in totally uncharted waters. Strange and murky waters, with sharks and an undertow: if we jump in, we may never come out.

But the man has the power to greenlight a script and a pilot and a series and a career.

“Sure,” we say. “Absolutely. Every day. Strap ‘em on, take ‘em off. We’re old hands.” He smiles, it’s the answer he was looking for. Everything’s good. But then –

“How about tzitzit? Do you wear tzitzit?”

“How about tzitzit? Do you wear tzitzit?”

Okay, this is too much. He knows about tzitzit, the ritual undergarment with fringes attached to its corners. I mean, everyone knows about the big stuff like keeping Shabbos or lighting candles or never putting mayonnaise on roast beef. But tzitzit? Who knows about tzizit except religious nuts like us? He’s clearly done his homework.

“Sure we wear tzitzit! Yes we do. Every day.”

“Excellent!” Thank God, we had passed the test. Now we could go on to talk about –

Now, we really do look at each other in bafflement. Is this just a way to humiliate us, ruin us, drive us out of the business? Is it real-life truth or dare, except the truth and the dare are the same thing? He stares at us with a coy smile. My partner actually asks me, “What do you think?” I shake my head in uncertainty. Then we turn back to the producer and stand up.

Together, we pull out our tzitzit.

So, yes, there are times when being religious can help you get work.

Now, it is true that when the producers of “Frasier" decided not to hire us, we heard through the grapevine it was because we wouldn’t work Friday nights. But I’m pretty sure that was more about being unavailable for rewrite sessions than about anti-Semitic persecution. And panicking when the producers of “Cheers” asked me what I wanted for lunch at my very first Hollywood meeting didn’t stop them from offering us a spot on the staff. And the Orthodox thing certainly didn’t prevent NBC from asking us to write the Rockefeller Center Christmas Tree Lighting special.

I kid you not.

But what about a regular job, outside of Tinsel Town?

Well, I was once up for a job writing communications for the CEO of one of the biggest asset management companies in the world. Every step of the interviewing process was a lovefest till they told me one of the requirements was to be on call 24/7. I told them I could do 24/6. They told me I could do 24/6 elsewhere.

When I was offered a job at another big financial firm, I told my prospective boss that I couldn’t work Friday nights and Saturdays. She said, “Hey, we’re not doing brain surgery here. The hours are normal.” Well, turns out “normal” to her was 85 hours a week. But none of those 85 hours was on Saturday, so we had a deal. Then came the Jewish holidays, which always seemed to fall at the busiest possible time. After yet another extended absence, my boss remarked that with all that extra time off, maybe she should convert. I told her it was a great idea, as long as she was willing to give up half the foods she liked, go for days at a time without electronics, and get thrown out of her host country every 100 years. “Never mind.” she said. Smooth sailing ever since.

Once you’re identified as a religious Jew, everything you do reflects on all other observant Jews, the Torah, God, the whole shebang.

In fact, my Wall Street employers have been consistently agnostic on my observance, it just hasn’t been an issue. And the abundance of Orthodox Jews throughout the workforce in a variety of interesting, productive, sometimes powerful positions seems to indicate that this is relatively universal (unless you’re applying to be, say, the Archbishop of Canterbury or the Grand Marshall of the hajj to Mecca).

No, the real challenge is what happens after you get the job. Once you’re identified as a religious Jew, you’re on display, and you’d be better be on your best behavior. Everything you do reflects on everyone else, all the other observant Jews, the Torah, God, the whole shebang. When my partner and I worked on “Cosby,” a newspaper reported that the show taped on Thursdays instead of Fridays because two Orthodox producers were on the staff. Of course, the real reason is the star liked three-day weekends. But Bill used to refer to my partner and me as “real Jews” and once told my father I was a mensch. He’s got his troubles now, of course, but it was nice to make a nice impression.

So I try to keep this all in mind at work. And I don’t take any meetings in the bathroom.

For Myself, A New History

The Paperboy From Heaven

Me and the Moai: What Was I Doing on a Remote Polynesian Island?
Don’t Believe in Other Gods Versus God is One
Seeing Without Eyes
Why Shouldn’t We Eat Whatever We Want?
Comments
MOST POPULAR IN Spirituality
Our privacy policy
Aish.com Is Looking for Great Writers