How Covid-19 Brought Me and My Hasidic Neighbors Together 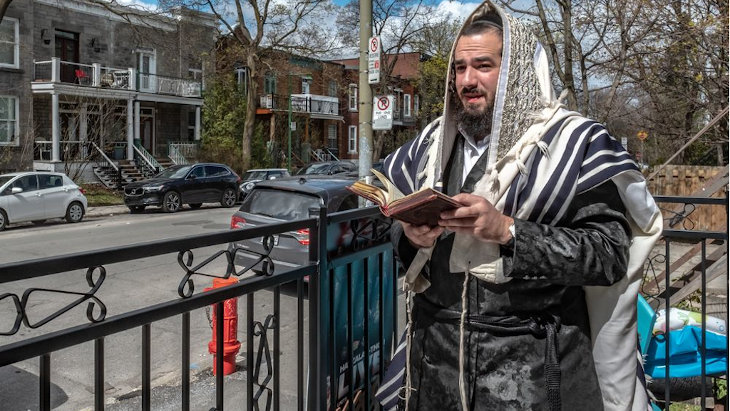 For years I felt rejected by my Hasidic neighbors. The pandemic changed all that.

I live on a Montreal block in Mile End, once the neighborhood of Mordecai Richler, which is now 50-per-cent Hasidic Jews – an ultra-Orthodox sect that prays three times a day, and wears black hats imitating 18th-century Polish aristocracy.

While I live among them as a secular Jew, and have friendly relations with some neighbors, the Hasidim separate themselves from me and my social world. For many in the neighborhood, including me, social distance with our counterparts is nothing new.

But COVID-19 quarantine protocols, while physically distancing me from secular society, have brought me socially closer to my Hasidic neighbors. Morning and night, their voices sing out in prayer: ancient Middle Eastern melodies float through the pandemic-emptied street, bringing archaic echoes of spiritual yearning to the urban streetscape. Fathers, sons, grandfathers and grandsons – it’s only ever men – cluster together on front stoops, lean out from balconies, and dot the sidewalk. Melancholic songs ring up and down the street in passionate call and response, and passersby stare in wonder. After weeks of this outdoor synagogue, I see that the Hasidim have something to teach us seculars about what it means for a community to reconnect in a COVID-19 world.

Hearing noises coming from my balcony, I stepped outside and was surprised to see four Hasidic brothers praying on the adjacent balcony.

My first response wasn’t so romantic. Hearing noises coming from my balcony, I stepped outside and was surprised to see four Hasidic brothers praying on the adjacent balcony. I went downstairs to see that my neighbor's front stoop was the center of the service, and immediately worried that this religious ritual might increase my family’s risk of infection.

Years ago, my neighbor put up a green plastic fence to separate our front stoops. I felt rejected. Since COVID-19, the same neighbor brings out a Torah scroll on a portable table, and I find the front of my house at the heart of their religious services. Because Orthodox Jews must pray communally in a “minyan" of at least 10 men, the Hasidim were in a bind when the government shuttered all religious buildings and forbade religious services. Rabbis, in accordance with government directives, forbade having minyans in person. Improvising, as Jews have often done living under regimes that forbid Jewish practice, my Orthodox neighbors took to the streets so that, while remaining two meters apart, they could continue to pray together. Instead of hiding in caves and basements – as Jews sometimes had to do in centuries past – the new coronavirus has driven them outdoors.

One morning my curiosity overcame my fear and I walked out to the sidewalk when I heard them chanting. As much as I enjoy secular life, I found myself missing a sense of spiritual connection. It was cold, with a smattering of April snow on the ground. In addition to COVID-19, we have to survive what Montreal calls “spring” together.

My neighbor had started praying with his son, and he watched for others to emerge from their front doors. White tallit – prayer shawls embroidered with silver and blue – covered their heads. They wore tefillin: black leather boxes containing parchment inscribed with Hebrew verses, which are wrapped with leather straps onto the forehead and arm. My neighbor walked up and down the sidewalk looking to connect with other Hasidim as they came out across the street and down the block. Silent, so as not to interrupt the order of prayers, they made hand gestures to each other like third base coaches, holding up fingers to indicate how many were praying. My neighbor signaled to a man a few houses away who peeked into his neighbor's window: two fingers. When they identified a minyan of 10 they said Kaddish. The prayer is recited by mourners for 11 months after a close relative dies. In Judaism, one doesn’t mourn alone – but surrounded by community.

The first Montrealer to die of COVID-19 was a 67-year-old Hasid who went to a synagogue two blocks away from me. Online news articles about the community became a hotspot of anti-Semitic ranting. The Hasidim felt immediately targeted. “The level of hatred, the level of focus, of scapegoating, has gone beyond anything we have seen before,” said one Hasid. When a janitor was seen cleaning a synagogue, a neighbor called the police and eight cop cars showed up. There are reports of verbal attacks on the street, and Hasidim being told to stick with “Jewish stores.”

A few unfortunately timed weddings, big families and travel back and forth may explain why my co-religionists were initially hit harder than other communities. And as friends and I joked, after Justin Trudeau warned against “speaking moistly,” energetic schmoozing might have been a factor in the Jewish transmission rate (JR0).

Some argue that they have been socially irresponsible, but the Hasidim are not libertarian yahoos: It is their communal commitments that have made them – and potentially my front yard – more vulnerable to the coronavirus. We worshippers of the secular indulge in unnecessary COVID-19 risks, too. Some go for runs in busy parks. Others order delivery from Pizza Pizza. My COVID-19 vices are social: ringing a friend’s doorbell to sing happy birthday to their child, midnight scotch drinking with friends (at two meters) and visiting my girlfriend across town (at nowhere near two meters). The risks we take are based on what we value most.

The Hasidim pray together. And my neighbors, facing the green fence, sing loudly right onto my stoop, potentially increasing my viral exposure. The coronavirus highlights how permeable the borders are between our bodies, and how much our private choices affect everyone around us.

After stepping onto the sidewalk that morning, I strolled up and down the block, seeing a Hasid every three or four houses. The silver embroidery on their tallit flashed brightly in the sun, imparting a splendor one does not see indoors. One man shouted his prayer from out of his open window on the second floor. I didn’t understand the words, and the singing wasn’t classically “beautiful” like the choirs in more mainstream synagogues and churches. But his voice rang out with a pained yearning that resonates in this time of uncertainty. At various points congregants yelled, so that all can hear, “Amen,” pronounced “Oh-MAIN,” meaning “so be it!”

They know what they’re praying; I don’t. They know what brings them together; we don’t. To what will we seculars say “Amen”? On Saturday morning, I joined their minyan.

And then they all simultaneously went quiet. They prayed the Amidah, a prayer said silently on one’s own. Closing their eyes they turned east – in the direction of Jerusalem – and began to bob up and down, swaying back and forth. Their fervor infected me, and I took a moment to stand, in the stillness of morning, feeling the weight and uncertainty of the pandemic that led to this outdoor synagogue. So many things seemed less important, and something – although I’m not sure what – felt more important.

On Saturday morning, the Jewish Sabbath, I decided to join their minyan. I feared they wouldn’t count me as a Jew, but I put on a tie, a black jacket and my yarmulke – the religious head covering that, along with hijabs, Quebec has banned from public office. They saw me with surprised but welcoming eyes. My neighbor whisked a Torah out of his house, like it was a famous celebrity and he was a security detail. They signaled back and forth silently to determine who would read and sing which parts. I let go of my insecurity and joined the chorus shouting “Amen!”

After the service everyone met one another’s eyes to congratulate each other. They looked at me too, smiling, and said “Good Shabbos!” Infected by their communal warmth, I felt connected to these previously distant neighbors.

Later that afternoon, walking down the street I asked a Hasid about the “Parsha HaShavua” – the section of the Torah they read that week. It addressed impurity: how to purify women who have given birth and men who have wasted an “emission” – meaning an ejaculation that has not landed in the divinely sanctified receptacle. Then it addressed how to purify someone with leprosy after a seven-day quarantine. “Just like now!” the Hasid said enthusiastically: “It was a disease that no one knew how to heal.” If a leper gets better, but their house remains unclean, concludes the Torah portion, it must be rebuilt using new materials.

The Hasidim have already figured out how to reorganize themselves, during COVID-19, based on their deepest values. And we – one of the most privileged societies in human history, who have known neither drought nor famine, war nor plague – need to do the same. The Sabbath is the day when we pause all forms of labor; it provides an opportunity to reconnect to the deeper values guiding our work week. COVID-19 has provided us seculars with just such a pause. In this time of physical distance and suspended labor, we must reimagine how we will reorganize our society. How we will restructure our economy – to come together, productively, without “wasting emissions”?

Given the plague of global warming, we cannot just return to “business as usual”: We need to discuss whether we must rebuild our house from scratch. We must rediscover the values that guide us. This is the conversation we need to have now: passionately, but not moistly.

Where Are You?
Vayelech 5783: Regret and Repent
Rabbi Sacks: Focus On the Important, Not the Urgent
Put Your Foot Down: Are Human Feet Poorly Designed?
Comments
MOST POPULAR IN Israel
Our privacy policy
Aish.com Is Looking for Great Writers