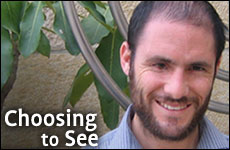 Clinton has a certain sense of confidence not easily found in a typical 30 year old young man. Perhaps it is because he is anything but typical. His life took a difficult turn one evening in Johannesburg over ten years ago. Rear ended in his car, his friend noticed that the vehicle behind them housed three men and a gun.

Clinton pushed on the gas petal. Seconds later shots were fired. One bullet missed Clinton and wedged itself in the headrest. One skimmed the side of Clinton's face. The third bullet penetrated his right eye, damaging his eye and nose, and stopped only when it hit the optic nerve of his left eye.

In the mean time, the perpetrators sped off, never to be seen again.

The Johannesburg Jewish community rallied around Clinton. Prayer services were formed outside his hospital room. Hundreds of Jews prayed for his recovery. Meals, financial support and rides to the hospital were bestowed upon the family and this young man.

The right eye was replaced with a glass one, and doctors told his parents he would be blind in his left eye since the bullet had hit the nerve. Clinton regained consciousness as a blind young man, barely 20 years old.

But miraculously, even before the hospital released him, Clinton's sight in his left eye was coming back. The medical community couldn't explain it. Slowly from the top and the bottom of his view his vision was returning! The black faded into sight again, and he was left with a thin black line running through the field of vision in his left eye.

"God had everything in place for my life to be saved."

"Everything that happens is for the good and God controls everything. God had everything in place for my life to be saved -- from the Jewish paramedic service at the scene within minutes, to the surgery theater all set up in the best hospital in Johannesburg, to the community praying. The power of a united community is amazing. I felt that all of Johannesburg was together in helping me."

After being released from the hospital Clinton needed to take it easy for a few weeks. On the day he went for a final check up, where he would await permission from his physician to start full activity again, Clinton wore his running clothes to the appointment. He got the okay and ran home from the doctor's office. After completing an advanced degree in physical therapy, he came to Israel where he now learns Talmud at Aish HaTorah along side his peers with the help of a magnifying glass and specially made eye glasses.

When asked how he comes by his positive attitude so easily Clinton explains, "I can either check out from life, or move forward and grow. I could have decided to just stay in bed and give up. I had a choice. I chose to move closer to God. God gives us challenges and we have to realize it is for the good. It may not seem good at that time, but God gives us only good. I managed to get on with my life, get my physical therapy degree, get to yeshiva and learn. But I had to make the decision of not giving up right from the beginning. Having a personal relationship with God helps. When I was in high school I would pray before starting one of my competitive track races. I wanted to be connected."

"I was always a positive person. The shooting made me think more deeply about the purpose of my life. I learned so much about the power of prayer. God controls everything and He is the Healer of all. I am competitive by nature and this helps me persevere. God always gives us things to go through, and with His help we learn and grow. We just have to make the efforts."

Clinton doesn't feel sorry for himself. He feels God's love in spite of the shooting and the subsequent limited vision. Everyone has their own challenges, but it is a rarity to see someone like Clinton who handles them so gracefully. Clarity of purpose in life and vision for the future is determined by one's outlook and mind set.

With a twinkle that can almost be seen in both eyes, Clinton explains, "Maybe I gained something instead of losing. Maybe I gained more vision than I even had before."