Jewish Life on an Aircraft Carrier 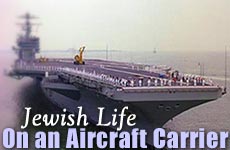 A Southern Baptist, en route to conversion, talks about God and life in the U.S. Navy.

I'm a sailor on board the Theodore Roosevelt currently deployed in support of Operation Iraqi Freedom. I've decided to convert to Judaism and the e-mails you folks send me are invaluable. There aren't a lot of Jewish resources available in our chapel (not to mention we don't have a rabbi on board), making the e-mails I receive from you all the more a lifeline of information. I'm especially a fan of The Jewish Ethicist. Thanks for the great work.

Aish.com wrote back and asked the author to share his story. We hope you enjoy it.

Once again I find myself in the Eastern Med, closer to Israel than I've been in years, but this time I won't be allowed to set foot on Israeli soil thanks to Hamas and their ilk. I'm a 32-year-old, married, enlisted sailor on board the American aircraft carrier USS Theodore Roosevelt. I recently decided to convert to Judaism and I've also recently found out that Haifa, a traditional port call for ships of the US Navy's Sixth Fleet, is now off-limits to us because of the threat of terrorism.

Every time I had visited Haifa before, I was clueless to the treasure available to me.

I suppose I should be thankful. I've been lucky enough to visit Israel previously when I was stationed on board the USS America and the USS George Washington. I'm sure there are Jews all over the world that yearn to visit Israel but don't have the means to do so. Every time I had visited Haifa before, I was clueless to the treasure available to me. I didn't visit Jerusalem, the Dead Sea, and the Western Wall. I especially regret not seeing Masada.

When I first became interested in Judaism a few months back, I had planned on buying all my Jewish kit in Haifa -- a kippah, mezuzahs, Chanukah menorah, dreidels, tallit, Seder plate, and lots of holy books to study from.

So how does an American sailor, raised in Texas as a Southern Baptist, become interested in Judaism? Thanks to a very wise brother-in-law.

Gabriel was my best friend before I married his wife's sister. We met just before we were stationed together on board the USS America, and quickly formed a bond closer than many brothers related by blood.

About a year ago, Gabe's parents, even more deeply religious than he was, called him with some serious news they felt he needed to know. They of course knew the depth of his faith in God and I'm sure they thought the news they had for him would, at the least, disappoint him. They told him they were converting to Judaism.

Instead of being shocked and dismayed, his response was along the lines of, "Well, it's about time." It turns out Gabe had many of the same troubles with Christianity I had. He never bought the whole Trinity thing and had never reconciled many of the contradictions in the Christian bible. The difference between the two of us is he never quit asking the tough questions, he never quit wrestling with God. I’d given up on God a long time ago.

The God of Judaism doesn't hide behind blind faith; He wants you to ask questions.

Gabe and I began talking about God again. He saw right away that I would be interested in Judaism, and everything he told me about it had an undeniable ring of truth to it. Judaism seemed to be made by God just for me. What about it appealed to me? The God of Judaism doesn't hide behind blind faith; He wants you to ask questions. Judaism respects and encourages learning like no other religion I've seen.

Also, I'm an avid environmentalist and Judaism is firmly on my side in that respect. I also love the way Judaism believes that faith alone isn't enough. Belief must go in tandem with actions motivated by that belief. I even enjoy eating kosher. It's a daily reminder that I'm (hopefully, soon to be) one of God's chosen.

On a more secular note, my newfound faith has brought with it whole new histories and heroes to learn about. Golda Meir, Anne Frank, Elie Wiesel and Yitzchak Rabin are just a few of the many I'm learning about. Being in the Navy, I naturally gravitate towards the martial. Israel's Dolphin class diesel electric submarine is one of the most advanced and beautiful submarines in the world, and the Merkava main battle tank is a gem. Nobody in the world disputes the competence of the IDF.

As for my job in the Navy, normally my duties would have me in the back of a P-3 Orion patrol aircraft operating a radar set. Instead I volunteered for one last tour on board an aircraft carrier. I can’t give details about what I do here, though suffice to say that I'm an information processor for the Navy.

Life in the American military for practicing Jews isn't an easy one. Navy wide, Jews make up only one percent of the force, and there are a grand total of only nine rabbis. These days, we are lucky enough to have one of those rabbis visiting our ship for three weeks and he'll be here for Passover.

Comfort food is popular to send to troops deployed, to evoke memories of a Jewish home.

There are very few Jewish resources in the ship's library and chapel. Everything is geared mostly for Christians. Jewish books and magazines are almost nonexistent out here and would be a treasure, even used books and magazines, to a Jewish serviceman or woman so far from home.

How can Jews around the world help? Even a simple letter or post card expressing your support would be a nice gesture. “Comfort food” is another popular thing to send to troops deployed, something that would evoke memories of a Jewish home. Contact your local military recruiting office or call the chaplain's office on any military base. They can point you in the right direction. Just be sure to address it, "ATTN: Command Religious Ministry Dept., for a Jewish Sailor, Soldier, etc.," and it will get to the right place.

And let's pray for a speedy and successful conclusion to Operation Iraqi Freedom.

Out of the Closet
Big OnThe Little Things
Chraime Egg Boil
Is Grease the Word?
Comments