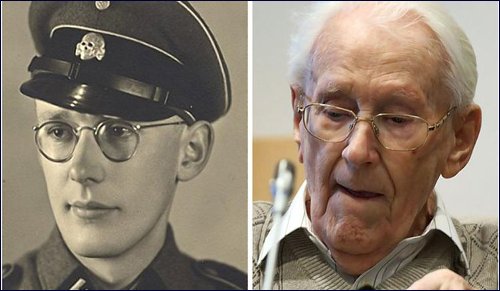 Oskar Groening is no hero. But he did jeopardize his own safety in order to combat Holocaust denial.

I shouldn’t have to say this but Nazis are bad. Unambiguously, unequivocally bad. I point that out at the outset because of the possibility that someone will misinterpret my upcoming words and say that I’m defending a Nazi. That is absolutely not what’s going on here.

That having been said, you may have heard that Oskar Groening, “The Bookkeeper of Auschwitz,” died a few weeks ago at age 96, before he could start a four-year prison sentence for being an accessory to the murder of 300,000 people. Groening’s job in Auschwitz included counting the banknotes confiscated from the prisoners and hiding the victims’ luggage so that new arrivals would not be able to infer what had become of their predecessors. Groening voluntarily signed up for the SS and, according to prosecutors, he was fully aware that prisoners were murdered immediately after arriving at Auschwitz. That he should be convicted for his role seems a no-brainer. Here’s where things get weird.

“I saw everything. The gas chambers, the cremations, the selection process. One and a half million Jews were murdered in Auschwitz. I was there.”

After being released from a British prison camp following the war, Groening never spoke about his time at Auschwitz. He went on to live an uneventful life that included stamp collecting as a hobby. Forty-plus years after the war, he was at a philately club meeting when another member started holding court on the “alleged” Holocaust, claiming that so many bodies could never have been burned and that the volume of gas necessary for the gas chambers would have killed every living thing in the area. Ultimately, the colleague sent Groening a Holocaust denial pamphlet, which Groening sent back, marked, “I saw everything. The gas chambers, the cremations, the selection process. One and a half million Jews were murdered in Auschwitz. I was there.”

This response was shared, making Groening very unpopular in neo-Nazi circles, and he started receiving calls and letters from strangers telling him that Auschwitz was not a place where human beings were exterminated and that what he recalled seeing with his own eyes was actually “a big hallucination.” As a result, Groening decided to publicly contradict the Holocaust deniers, including in a 2005 BBC documentary entitled Auschwitz: the Nazis and the “Final Solution.” This is significant. According to Nazi hunter Efraim Zuroff, Groening going public with his past represents “the first (time) in recent history in which a defendant has talked about the horrors of Auschwitz. That’s something you almost never see.”

Going public had the unfortunate consequence (for Groening) that it put him on the authorities’ radar. In 2014, he was charged by German prosecutors for his role at Auschwitz and, in 2015, he was convicted. A variety of appeals and other motions to avoid prison were denied but Groening was hospitalized and died before he could begin his sentence. Even among victims, there was some dissent as to the sentence. For example, Eva Mozes Kor, a survivor of Auschwitz, said that at the time of Groening’s conviction her “preference would have been to sentence him to community service by speaking out against neo-Nazis. I would like the court to prove to me, a survivor, how four years in jail will benefit anybody.”

Groening’s story reminded me of the Roman soldier who murdered Rabbi Chanina ben Tradyon, one of the “ten martyrs” about whom we read on Yom Kippur. Rabbi Chanina was sentenced to death by the Romans for the crime of publicly teaching Torah. The authorities wrapped him in a Torah scroll and bunches of thorns, which they lit on fire. They put wet wool over his heart to make it take longer and extend his suffering. Rabbi Chanina’s students urged him to open his mouth, letting in the fire so that his suffering would end sooner. This he declined, saying, “Let the One Who gave me my soul be the One to take it!” Finally, the executioner asked Rabbi Chanina, “If I increase the fire and remove the wool, will you bring me with you into the Next World?” Rabbi Chanina agreed so the executioner removed the wool and stoked the fire. He then jumped into it, dying with Rabbi Chanina. This prompted a Heavenly voice to declare that both Rabbi Chanina and the executioner had been admitted to the Next World. When Rebbi heard this, he cried, saying that it takes some people their entire life to earn a place in the Next World while others can do it in a single moment! (Talmud, Avodah Zarah 18a)

As long as our lights burn, there’s still time for us to make repairs.

The Roman executioner is not the hero of that story. He’s a bad guy who did a good thing. Similarly, Oskar Groening is no hero. He’s no role model. But he did a good thing. He jeopardized his own safety in order to combat Holocaust denial. That doesn’t necessarily exempt him from punishment. Achan, the looter in Joshua chapter 7, caused a military defeat and 36 casualties. He secured a place in the Next World through his confession but he was still executed for his crime. Rabbi Chanina ben Tradyon’s Roman executioner apparently had to die to atone for his crimes. Perhaps Oskar Groening’s redemption, like theirs, was purely spiritual, in which case he still should have gone to prison. Who can say?

To me, this story has the following lesson: I doubt very much that most people reading this have done anything even approaching the magnitude of the evil perpetrated by Achan, the executioner of Rabbi Chanina, or the bookkeeper of Auschwitz. And yet we often despair, thinking ourselves beyond redemption. If these arch-criminals can mitigate their misdeeds, we normal folk certainly haven’t done anything from which we can’t bounce back.

Rabbi Yisroel Salanter once saw an elderly cobbler mending shoes in the wee hours by fading candlelight. When he asked why the shoemaker was working so late by the last vestiges of the flame, the old man replied, “As long as the light burns, there’s still time to make repairs.” From this Rabbi Yisroel derived the equivalent spiritual lesson: as long as our lights burn, there’s still time for us to make repairs.

This article originally appeared on Ou.org.