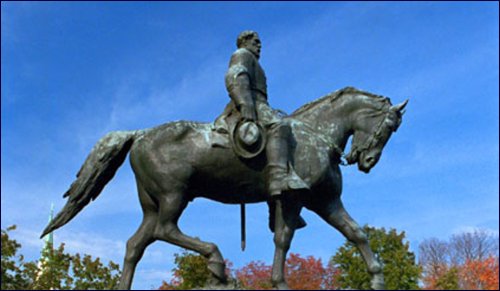 All political considerations aside, there is a fascinating and relevant reason against creating complete statues of people.

All over America statues are coming down.

In the aftermath of the violence at Charlottesville a powerful movement is now calling for the removal – as well as most often also the destruction – of statues honoring historic figures of America’s past whose lives are deemed unworthy of respect from our present day perspective.

The statue of Gen. Robert E. Lee in Emancipation Park and the statue of Gen. Thomas J. "Stonewall" Jackson in Justice Park, focus of violent protests earlier this month, were each covered with large black tarps, with strong pressure to consign them to the dung heaps of history.

Pepperdine University will remove a statue of Christopher Columbus from its main campus after students at the Southern California Christian School made multiple demands to take it down. A towering statue of Gen. Robert E. Lee no longer stands over the city of New Orleans. After the hours-long process of removing the statue of the Confederate general who symbolized Southern resistance in the Civil War ended and a crane lifted the statue from its perch, a largely jubilant crowd shouted "Take him down, take him down!" and "Hey, hey, good-bye!"

I don’t want to get involved in the political ramifications of the “Down with the Monuments” movement. What I find most interesting is the unintentional but nonetheless remarkable link between this sudden surge of anti-statue fervor and Judaism’s historic position, rooted in the second commandment, forbidding the making of any “graven image or any likeness which is in the heavens above, which is on the earth below, or which is in the water beneath the earth” (Exodus 20:4).

While sculptors were busy for thousands of years honing their craft and producing works of great artistic merit, Jews took seriously the biblical prohibition important enough to be worthy of inclusion in the Decalogue. Not only were there no attempts to portray God himself – for the obvious reason that one of the 13 basic principles of faith as enumerated by Maimonides is that the Almighty “has no form of a body and is not corporeal” - but Jews shied away from any representations of even our greatest leaders and heroes.

We have no idea what Abraham, Isaac or Jacob looked like – and no Torah observant artist ever dared to enlighten us. It was Michelangelo who created the admittedly stunning statue of Moses that has captivated viewers for centuries. But Michelangelo wasn’t Jewish, and if he were he almost certainly would’ve been reprimanded by the rabbis.

The Shulchan Aruch, the Code of Jewish Law, allows one to create two-dimensional paintings and images of the human body, as long as the entire body is not shown (Yoreh Deah 141-142) and Rabbi Moses Isserles, known as the Rema, wrote that even a statue of man is permitted as long as it is not complete. Today most traditional rabbinic authorities follow this ruling, sanctioning depictions of the human body that are somehow incomplete such as a sculpted bust or the armless Venus de Milo, one of most famous examples of ancient Greek sculpture. But the full depiction of a human being is undisputedly forbidden.

Therefore most of the statues presently being protested for political reasons are objectionable because they transgress a biblical prohibition. What could be an underlying rationale behind this negative commandment?

Perfection is an ideal for which we strive but in light of our humanity it forever eludes us.

The simple reason most often given is that a statue might readily become an object of worship, a very relevant concern when idolatry was rampant. Today the drive for worshipping wood and stone has been eradicated; perhaps we can discover another rationale that we would find highly relevant today. A human being placed on a pedestal might not only be respected; conceivably he could become deified – not as a god but still no longer viewed as mere mortal sharing human imperfections. And it is this most important truth that separates us from the Almighty: none of us is perfect.

Perfection is an ideal for which we strive but in light of our humanity it forever eludes us. Even Moses, the Torah takes pains to remind us, made mistakes. Our capacity for choosing wrong over right, for acting against our better instincts, is what permits our spiritual growth and turns our ability to often overcome our evil inclination all the more remarkable and praiseworthy.

Human greatness is only possible because of our mortal imperfection.

It is human hubris, the sin of ego misled into believing itself sharing divine perfection, which is nothing short of heresy. It is the idolatry of assuming that we are on the same level as the Almighty. And it is a terrible mistake whether we believe it about ourselves or regarding another human.

Yes, we can have heroes. But to idolize them as if they are “complete” – deserving a kind of worship which ignores any personal failings and worthy of a reverence which holds up every aspect of their lives, no matter how unethical or improper, as role model - is in fact nothing short of the sin of idolatry the Torah so painstakingly warns us against.

We may put people on pedestals, but only if we are wise enough not to see them as “complete”. We can admire their achievements if we are willing at the same time to acknowledge their failings.

The Torah wants us to reserve perfect veneration for the only One in the universe who embodies perfection - and that of course is the Almighty. Thus a “perfect” representation of a human being is forbidden. To believe in human perfection is a heresy which can lead to fanatic worship and unquestioning obedience even today. A statue which is not “complete” allows us to acknowledge the parts of a life which deserve to be recognized and admired even as we retain our critical faculty to prevent us from idolizing the imperfect and incomplete stories of our heroes.

Instead of “destroying the statues” perhaps it would be more effective to rethink the lives of those sculpted for posterity. Learn to differentiate between their achievements and their imperfections. Do not lose sight of the former because of the latter. Respect – but don’t worship. And feel free to admire the “incomplete” accomplishments of those who played a role in making this a better world.

As a Rabbi, I Won't Tell You How to Vote