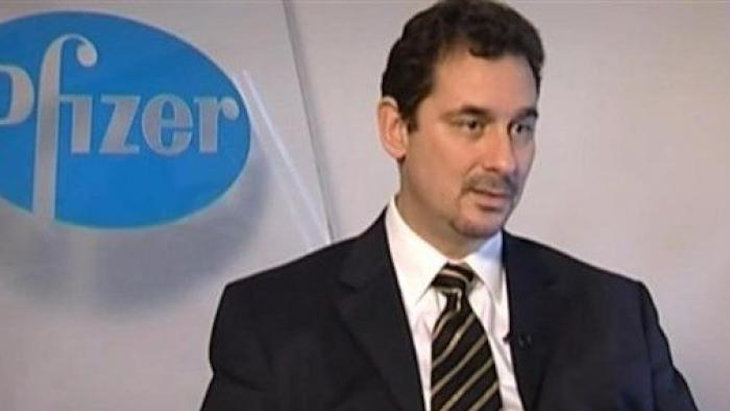 A Greek newspaper is attacking Albert Bourla with anti-Semitic tropes.

On Monday, November 9, 2020, the US pharmaceutical giant Pfizer made a welcome announcement: a vaccine they were working on, along with the drug maker Biontech, has shown promising results in clinical trials, blocking over 90% of Covid-19 infections during trials to date. The news sparked exhilaration: Pfizer’s stock soared and billions of people around the world dared hope that Pfizer might soon help end the Covid-19 pandemic.

But relief and hope were in short supply in the offices of Greece’s Makeleio newspaper. Instead of covering Pfizer’s good news, the small paper zeroed in on the Greek Jewish heritage of Pfizer CEO Albert Bourla, who was born in Thessaloniki, a port city in Greece which was once a major Jewish center, known as the “Jerusalem of the Balkans” before World War II.

The newspaper claimed that Bourla is evil and the vaccine that Pfizer is working on is actually deadly. The paper juxtaposed a photo of Bourla with that of Nazi war criminal Dr. Josef Mengele, who conducted gruesome experiments on Jewish prisoners. In case any readers missed the Holocaust reference, the paper included a picture of Nazi-era striped concentration camp uniforms. Albert Bourla wants to “stick the needle” into Greeks, delivering what the paper described as “poison” in the guise of a vaccine. 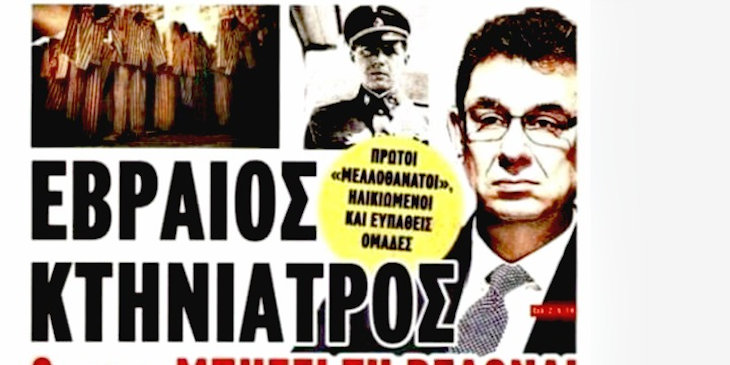 After receiving criticism for this bizarre anti-Semitic headline, Makeleio published another hate-filled article three days later, describing Bourla as a “Greek Jew” who was in thrall to a made-up, sinister-sounding “Israel Council”.

The newspaper’s slurs wouldn’t have seemed out of place in Nazi times. Leveling such anti-Semitic slanders at a Jew from Thessaloniki is an ironic repeat of history, echoing the days when Thessaloniki’s Jews were targeted and smeared, accused of being evil and of having almost superhuman powers to harm non-Jews.

In the years following the Spanish expulsion of Jews in 1492, about twenty thousand Jewish refugees moved to Thessaloniki (formerly called Salonika). It became the largest Jewish center in all of Greece; by 1939 about 55,000 called the city home. When German troops occupied the city in 1942, they plundered the city, sending the Jewish inhabitants to concentration camps and seizing tens of thousands of pieces of art and other property back to Germany. Only 4% of Thessaloniki’s Jews survived. 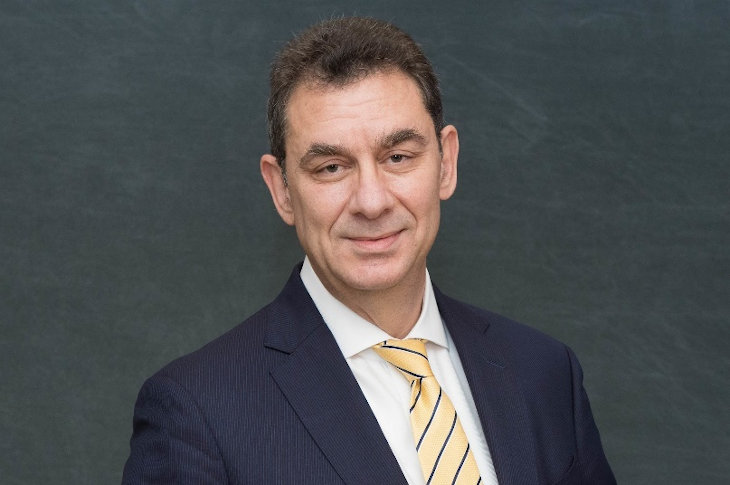 For years after the Holocaust, Thessaloniki’s residents seemed to do their best to obliterate their city’s Jewish heritage. A new university, Aristotle University, was built atop the town’s Jewish cemetery, destroying generations of Jewish graves. It was only in the 1980s that Thessaloniki first erected a monument dedicated to the memory of the over 50,000 of the city’s Jews who’d been murdered. Today, approximately 1,000 Jews live in Thessaloniki. Jewish life there is more visible today, but it’s not easy.

Despite being home to a very small Jewish community – just 5,000 out of a national population of nearly 11 million – Greece harbors intense anti-Jewish feelings. A recent poll by the Anti-Defamation League (ADL) found that 69% of Greeks harbor anti-Semitic opinions, as compared to 24% in Western Europe and 26% of people globally. Greek levels of anti-Jewish feeling were higher than anywhere else in the world outside of the Middle East.

Media coverage is a possible driver of these hateful attitudes. Some Greek newspapers routinely slander Jews and the Jewish state using horrendous anti-Jewish stereotypes. In fact, the week before Makeleio printed its outrageous slanders against Albert Bourla, it was ordered to pay a fine by a Greek court for insulting Greek Jewish community leader Minos Moissis, whom a columnist called a “crude Jew” who stole money from “poor Greeks”.

Makeleio is a smaller newspaper, commanding only about 8% of the market share in Greece, but anti-Jewish slurs are common in other papers as well. In 2018 the left-leaning, more prestigious newspaper Efimerida ton Syntakton, which usually is critical of anti-Semitism within Greece, published an outrageous cartoon depicting Israeli soldiers as Nazis, leaving bloody handprints on the Western Wall, Judaism’s most sacred site.

On August 7, 2018, the extremist newspaper Eleftheri Ora accused “Zionism” of causing the deadly forest fires near Athens that killed over 100 people.

While many Greeks condemned the outrageous Makeleio headlines, their damaging message continues to resonate with thousands of readers. “The identification of the CEO of Pfizer with Mengele, the so-called butcher of Auschwitz, is an appalling and unethical assault against Albert Bourla only because he is a Jew,” the Central Board of Jewish Communities in Greece (KIS) declared. Greece’s Ministry of Education and Religious Affairs condemned the articles as “the most vile antisemitism which brings to mind the Medieval period when Jews were accused of every disaster, illness or defeat.”

Yet with tensions running high due to the global pandemic, Jews are once again finding themselves in the cross hairs, accused of nefarious actions and subject to conspiracy theories much as we were during the Middle Ages.

A May 2020 report by American Jewish Communities (AJC) found that Jews were being blamed for the coronavirus pandemic around the world.

A Lebanese-American professor at California State University, Stanislaus, falsely tweeted that Jews would use the Covid pandemic to justify mass imprisonment of “non-Jews”. In Turkey, a retired intelligence official made the false charge on President Erdogan’s television network that Jews and Zionists had invented Covid-19. The Palestinian Authority (PA) issued untrue official communications that falsely claimed Israeli hospitals were only treating Jewish patients with Covid-19 – even though Israel at the time was supplying the PA with medical training, test kits and other medical equipment and PPE.

This steady drumbeat of blame has had a chilling effect. A study in May 2020 by Oxford University found that fully one in five English people believed the completely untrue claim that Jews created Covid-19 in order to bring about global financial collapse and to profit financially. The Community Security Trust CST) in England has documented multiple anti-Jewish conspiracy theories that have become popular, blaming Jews for supposedly inventing or spreading Covid-19.

“Conspiracy beliefs have...been linked to feelings of powerlessness, anxiety, isolation and alienation,” Dr. Aleksandra Cichocka, a political psychologist at the University of Kent in England and an expert in conspiracy theories, notes. “Those who feel that they are insignificant cogs in the political machinery tend to assume that there are nefarious influences at play.”

That’s why it’s more crucial than ever to stand up now and counter false assertions whenever we hear them. The bizarre attacks on Albert Bourla by Greece’s Makeleio newspaper might sound so far-fetched that it’s impossible anyone would actually believe them. Yet hearing this sort of anti-Jewish slur does have an effect, causing people in time to suspect Jews and to harbor negative feelings and fears towards us.

Now is the time to take a stand against conspiracy theories and anti-Jewish slurs. When you hear of anti-Semitic articles or insinuations, speak up. Post on social media. Write letters to the editors of news outlets that engage in attacks on Jews or others. In this parlous time, we all have an obligation to make sure that we are beacons of reasoned discussion, and to make our reasoned opinions heard.

Taking Back Nature: A Reflection

The Time to Reinvest is Now

It’s Open Season on Jews in New York City
The 21st President of the United States: Failure or Inspiration?
Hiding Their Jewishness
The Jewish Pope: Following the Questions Home
Comments