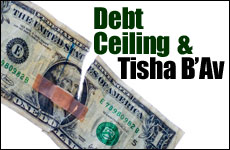 Raising our personal debt ceiling for tolerance and peace will bring down the spiritual debt of our nation.

The debt ceiling. Day after day that’s all we hear about in the news.

According to the Secretary of the US Treasury, unless Congress votes to raise the debt ceiling or borrowing limit by Aug. 2, 2011, the US federal government will be unable to borrow enough funds to pay its bills. It’s like hitting the limit on your credit card. Unless the credit card company raises your credit limit after you maxed out, you can’t use it to cover further bills.

Economists predict that if the debt ceiling is not raised, the United States will begin to default on its loans for the first time in national history. They say that this would be catastrophic to the entire world economy and the global stock markets are expected to crash. The US dollar is expected to become worth much less, interest rates are expected to rise, and any recovery from the financial collapse of 2008 is expected to stall.

Seems like there shouldn’t be an issue for discussion. Congress should just raise the debt ceiling in order to avoid any financial catastrophe.

But that has proven to be a difficult course of action. Both President Obama and Congress agree that the debt ceiling should not be raised unless spending cuts occur as well. They agree that the US national debt is getting much too high, over 14 trillion dollars, and that government spending cuts are necessary to bring down the debt. But they disagree on what kind of cuts should be made and whether taxes should be raised along with it to help reduce the debt.

Months of increasingly stressed negotiations have been unsuccessful to bring a deal that can win approval from all of the necessary players: the Republican-led House, Democratic-led Senate and the White House. This difference of opinion has recently become extremely urgent by the day, given the Aug 2nd deadline is less than a week away.

As I write this, there is still no deal. On the contrary, the sides seem as far apart as ever judging from the exceedingly acrimonious declarations from both sides.

And the American people have had enough.

“‘When I see that there’s no compromise and they’re willing to ruin the economy I feel very negative,’ said a 65 year old from Illinois. Polls and interviews conducted over the past two days show Americans growing disenchanted by and disconnected from congressional leaders and Obama.” (Bloomberg News, July 26, 2011)

Unless a major breakthrough occurs to cut through the bitterness and hatred being thrown around between politicians on both sides, we could be heading toward a major disaster—of our own doing, one that could have been avoided if both sides would somehow find a way to compromise.

Related Article: On the Same Team

And I can’t stop thinking about a cataclysmic event in Jewish history.

Before the destruction of the 2nd Temple (70 BCE) by the Romans on the 9th of Av, the Romans had laid siege around Jerusalem, but sufficient grain had been stored by the inhabitants of the city to sustain them for 21 years. The leading Torah sage at the time was Rabbi Yochanan ben Zakai, who was in favor of pursuing a peace treaty with the Romans in order to ward off a war and to save the Temple from destruction. But a Jewish group of zealots, called the Biryonim, wanted to force all Jews to take up arms and decided to ‘wreck the economy’ by burning down all the granaries, thus creating a sudden and severe famine in the city. Anxious of these militants, and seeing that Rabbi Yochanan ben Zakai’s peace overtures did not represent all of the Jews, the Romans took advantage of the newly created famine, broke through the city walls and eventually destroyed the Temple.

Jews could not get along, could not come to a compromise as to how to help themselves avert disaster. Instead, they were arguing and avoiding peace leading to self-inflicted tragedies. The Talmud Yoma 9b tells us that the Temple was destroyed due to the acrimony between Jews, sinat chinam, baseless hatred.

During this period of the Three Weeks leading to the mournful day of the Tisha B'Av when the Temple was destroyed, we are all trying to improve ourselves and our relationships with others. This campaign has taken on even greater emphasis as we still reel from the tragic murder of Leiby Kletzky.

I know of many people who decided to make a great change in their lives in making peace with former ‘enemies’ in a positive response to the tragedy. People who haven’t spoken to others in years due to experiences of bitterness and acrimony have taken steps to resolve their conflicts. They sent that peace offering, that phone call, email, text, which requested a different way — a way out of their serious differences. We all have that one person (or more) that we didn’t get along with in the past. Perhaps we can reach out to them too.

As our politicians in Washington D.C. head toward a possible event of ‘cutting off the nose to spite the face,’ let us discover an opposite path.

Let us remind ourselves that each and every Jew is a vital part of one national soul. Mystics explain that this is why what one Jew does anywhere in the world spiritually affects all other Jews whether positively or negatively. Everyone counts and every one counts. The oneness of the Jewish people is a spiritual reality.

We can take a bold step toward the path of peace and unity by bettering our relationships with others. We can try to judge them favorably, looking at them in an optimistic way. When we live with this outlook in the ‘courtrooms of our minds,’ we spurn the roots of harmful vibes which often lead to hatred.

If we raise our personal ‘debt ceiling’ for tolerance and peace, we will bring down the ‘spiritual debt’ of our nation which stands in the way of our redemption.

The Heroine in Everywoman
Judaism and Mental Health
Jews and the Chocolate Trade
Cats: 8 Jewish Facts
Comments
MOST POPULAR IN Israel
Our privacy policy
Aish.com Is Looking for Great Writers