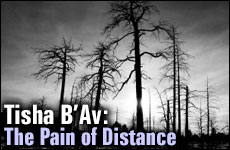 On the ninth day of Av, God teaches us just how painful it is when He isn’t there.

The month of Av commemorates the destruction of two Temples, as well as countless other tragedies throughout Jewish history. It is a time in which we lessen our joy.

The Talmud (ibid. 29b) illustrates this principle. How do we lessen our joy? If a Jew faces a lawsuit, he should delay it. His luck is bad this month; better to push it off.

It is a very curious example. If I were authoring the Talmud and wanted to illustrate lessening joy, I would have written, “Therefore, we do not celebrate weddings, go to concerts, go to the beach, etc.” Why of all things does the Talmud mention court cases? Is winning in court somehow the Talmud’s definition of “joy”?

Let us look at the origins of Tisha B’Av. The first Tisha B’Av occurred at the start of Jewish history, during the Jewish people’s sojourn in the desert. Twelve spies are sent to scout out the Holy Land and bring back their report. They see giants dwelling in fortified cities. They return to report that that the land is frightful and forbidding. It would be impossible to conquer it; there is no point even trying. The people lose heart and cry the entire night. That night was the night of Tisha B’Av.

God saw their tears and responded: “You cried tears of naught, and I will establish for you [on this day] tears for all generations” (Talmud Ta’anit 29a).

There is certainly much poetic justice in God’s response. We cried without basis, so God will give us reason to cry. But I believe when we think about it we will see that there is a great deal of actual justice in God’s words as well.

The sin of the spies really makes no sense. Why were the people so scared? Because of giants? Fortified cities? Didn’t they just witness the Ten Plagues and the Splitting of the Sea? Weren’t they subsisting daily on a well which followed them in the desert and manna which fell from heaven? Did they really not know what any small child is taught today – that God is all-powerful, that He can do anything? Were they really afraid that the Creator of heaven and earth could not fight against a bunch of giants that He Himself created?!

The answer to this revolves around one of man’s great struggles in life. Of course the Jewish people knew that God is all-powerful. They saw this close up: They were living right in His presence in the desert. But that was just it. Living so close to an omnipotent God is scary. He saw their every move; His Divine Presence was visibly before them in the Tabernacle. As much as God loves us and cares for us, being right in His presence is intimidating. How could we possibly disobey Him?

If the Jews were going to go it on their own, they didn’t stand a chance.

But the Land of Israel would be different – or so the Israelites thought. They would no longer be living with a supernatural spring and manna falling from the heavens. They would have to till the soil and sow the earth, growing bread through the sweat of their brow. They would live “natural” lives, just a little bit more removed from God. And likewise, they would have to take arms to conquer the land. An all-powerful God could do anything of course. But the Holy Land was not going to be a place of open miracles, as the Exodus from Egypt. They would have to fight for the land and occupy it on their own. And they needed to spend spies, to determine how best they might conquer it.

But there was one problem. If the Jews were going to go it on their own, they didn’t stand a chance. How in the world were the puny Israelites going to take arms against massive giants? And so they cried. They wanted to feel vulnerable, just a little more distant from God. But if they were, they hadn’t a whisper of a chance. They had much to cry about.

God responded to their tears: “You want to feel distant from Me – the vulnerability of being on your own in this world? Then I’ll give you reason to cry. I will withdraw the Divine protection which is the lot of the faithful, and let you feel how painful life is. It was too intimidating having Me close up at all times? Then you’ll get your wish! I’ll remove My guiding Hand. And you will see just how painful and empty life will become.”

Thus, the month of Av is the one time of year in which we cannot just glibly say everything will work out for the best. We cannot be so sanguine that God will take perfect care of us. This is the one time in which God withdraws His Divine providence to let us experience the pain of distance from Him.

We can now understand the Talmud’s illustration of lessening our joy: We should not go to court since the odds are not in our favor. Is that the primary definition of joy? Yes it is. There is no greater joy than realizing God is with us, and that whether we recognize it or not, everything He does for us is for our best. This is the one time of the year in which God withdraws His loving Divine providence from us. In order to show us how much we need Him, God removes Himself from the picture just a little bit. You didn’t want to be too close to Me? Then feel the distance. And you will recognize just how painful life without God can be.

The Talmud there continues as follows: “Just as when Av begins we lessen our joy, when Adar begins we increase our joy.” Adar is the month in which the holiday of Purim occurs. In the Purim story, God appeared to be hidden. There were no open miracles. But when the story closes and the salvation occurs, it was clear that even in His hiddenness God was orchestrating events all along. If sadness is not seeing God in our lives, the ultimate joy is recognizing that even when God appears hidden, He is really there all along, caring for us behind the scenes. If we truly learn the lesson of Av and yearn to bridge the apparent distance between God and mankind, we will recognize that in His concealment He was really there for us all along. 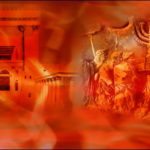 What Are Tisha B'Av & the Three Weeks?5 min read 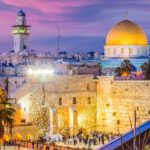 Crying for Nothing on Tisha B’Av4 min read 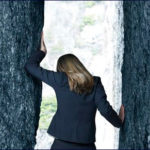 In the Narrow Places: An Introduction to The Three Weeks6 min read

When God Moved Out6 min read 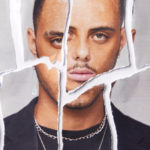 Healing the Brokenness Within: How to Tap into the Energy of Tisha B’Av6 min read