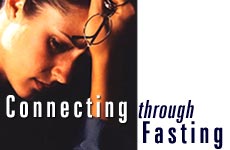 How can being hungry help us create a spiritual connection?

Why do we fast? What function does it serve in our spiritual life? How can being hungry and thirsty help us connect?

There are six regular fast days in the Jewish year, (seven if you count the fast of the first born before Seder night). Two of these days, Tisha B'Av and Yom Kippur, are "full" fasts. They begin at sunset and end the following day when the stars appear. The rest are "half" day fasts, lasting from sunrise to stars out. During these times, adult Jews may neither eat nor drink – even water (there are exceptions for people with health issues).

Except for Yom Kippur, these fast days were established because of the catastrophes and suffering that occurred on those dates. Their purpose is to help us recall the negative behavior of our ancestors that led to those calamities, and to focus our attention on our own parallel behavior that continues to drive our nation into similar negative situations.

During these days, each person is meant to make a personal accounting of his or her behavior and resolve to return to the positive path.

According to Eliyahu Kitov in The Book of Our Heritage, one who fasts and spends the day idly without repentance, misses the point. That person is emphasizing the fasting, which is secondary, and de-emphasizing the repentance which is primary. He quotes the book of Jonah (3:10) where it says about the people of the city of Ninveh, "And God saw their actions." Our sages point out that the verse doesn't say that God saw their sackcloth and fasting, but their actions (Babylonian Talmud, Ta'anit 22a). The purpose of fasting is to bring one to repent, and true repentance brings about a change in actions.

The purpose of fasting is to bring about a change in actions.

However, repenting without fasting is not enough. The fast days were ordained either in the Torah or by our prophets, and throughout the generations, they have been accepted and observed by the nation of Israel. Since Judaism eschews asceticism for its own sake, there must be something about fasting that serves as a vehicle for repentance.

A distinctive feature of Judaism is its philosophy of integrating the spiritual with the physical. Jews do not reject the physical in favor of the spiritual; rather, they recognize the opportunity that living a physical existence provides for the exercise and strengthening of the spiritual. In this world, the physical and the spiritual are inextricably intertwined and we must use both to activate our ultimate growth and to achieve our raison d'etre.

We use the physical as a doorway through which we access the spiritual. This is one of the reasons that we clean the house, prepare delicious foods and wear beautiful clothes for Shabbat. The sense of tranquility that stems from dwelling in an orderly environment, the fullness and pleasure that good food engenders, and the touch of majesty that one feels when dressed in one's finery, all help create a sense of separation from the routine of the mundane and heighten one's ability to connect to God. We manipulate the physical to gain access to the spiritual.

Hunger is a feeling of emptiness, of desire for sustenance. It can also refer to a non-food related desire or craving, as in "hungry for success" or "hungry for power." One of Webster's definitions is "lacking needful or desirable elements; not fertile; poor." Hunger is the state of not having what one needs (or wants) and yearning for it.

Spiritual feelings are frequently very subtle; often, we have to put forth some effort to recognize them. Halacha (Jewish law) helps us in this process. By specifying particular behaviors and dictating when they must be performed, halacha provides physical sensations that point to spiritual realities.

Hunger on a physical level helps us access the desire on a spiritual level.

Feeling hunger on a physical level helps us access the concept of desire and need on a spiritual level. Requiring fasting on days that necessitate repentance helps us activate the longing we have to walk on a path that leads to a rectified world. When employed, rather than ignored, the hunger can forward our repentance.

Fasting can also help us address the common difficulty of not relating to the reason for the fast day. Of course, educating oneself as to the origin and significance of the day are vital, but even with an understanding of what the day is about, one can feel distant from its essence. Fasting helps engender a sense of loss and of vulnerability; with effort, these feelings can be used as stepping-stones to internalizing the meanings of the events that prompted the declaration of that particular fast.

In addition, fasting is reminiscent of the atonement service that was performed in the Holy Temple in Jerusalem. During that time, one who sinned could activate his or her repentant energies by physically bringing an animal offering to God on the Temple altar. Of course God does not need offerings from humans; the entire process of animal sacrifices and offerings is about using the physical to access the spiritual. For some of the offerings, the fat and the blood of the animal would be consumed by fire (that part was "for" God), and the meat was eaten by people.

There is a very deep way that that process relates to fasting. In some prayer books, there is a special prayer that is inserted at the end of the afternoon amidah prayer on an individual fast day. The following is a loose translation:

Master of the Universe, you know that during the time that the Holy Temple stood, a person who sinned could bring an offering, and nothing except the blood and fat was (actually) offered, and in Your great mercy, You would grant atonement. And now, I have fasted, and diminished my fat and my blood. May it be Your will that the diminishment of my fat and my blood, that was diminished today, be as if I offered it before you on the altar, and may you show me favor.

In other words, this prayer asks that the physical result of fasting be bound together with the spiritual impetus for fasting, and that they be accepted by God as if they were offered in the time and place where we as a nation were most connected to God.

Fasting is difficult, but it is the very fact of its difficulty that gives us the opportunity to connect to God in a stronger way. The sublimation of our own desires to eat in favor of the directive to fast is itself an offering. In addition, harnessing the emptiness that fasting engenders to bring about a deeper level of repentance, along with the sacrifice that we can "offer" to God, makes fasting a precious opportunity for connecting ourselves with God's will.

Healing the Brokenness Within: How to Tap into the Energy of Tisha B’Av
The Blue Beyond
Great Place to Live
Is Eating Supposed To Be Spiritual?
Comments
MOST POPULAR IN Tisha BAv
Our privacy policy