Confessions of a Jewish Jedi 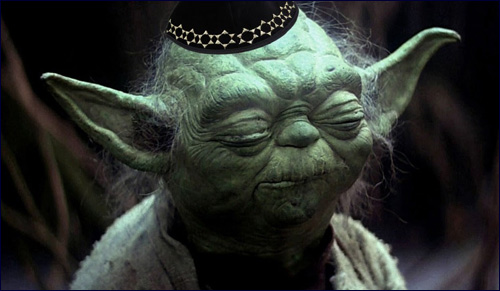 From the age of 5 I’ve been obsessed with Star Wars. As I became more observant, the movies helped me on my own Jedi journey.

Star Wars was a staple of my childhood. Growing up in the eighties, who wasn’t enchanted by the wonders of The Force or the impressive feats of the Jedi? Excited by the dazzling light-sabre duels and space battles? Charmed by the witty whistles of R2D2 and the exploits of the adorable Ewoks?

‘I can’t believe it!’ Luke exclaims. Yoda replies, ‘That is why you fail’.

And what about in Empire Strikes Back, that most dramatic, bone-tingling moment in cinema history, ‘No, I am your father!’ Darth Vader? Darth Vader the robot? Monster? Demon? He’s actually human? He’s our hero’s Dad??? It’s not a spoiler to say that right? I mean, everyone in the world knows that Darth Vader is Luke Skywalker’s father. I must’ve been only about 5 or 6 when I watched the movie and I still remember it. Something as big as that leaves its mark.

I wasn’t as keen on Empire Strikes Back - it was too serious and the ending too sad; Luke bruised and bloodied and reeling from discovering his father is a murderous megalomaniac psychopath, and Han frozen in carbonite (whatever that is). My favorite of the movies as a child was definitely Return of the Jedi, mainly because I loved the Ewoks and the happy ending.

You can imagine how excited I was by the release of the prequels. More Star Wars? Amazing! I couldn’t wait! I remember when I first heard that Episode 1 would be released in 1999. 1999! It was too long to wait! If only the years would speed up!

When at last the big day came I went with a group of friends to see The Phantom Menace with high hopes.

What a let down! The next two prequels were marginally less diabolical, but all Star Wars fans would agree that it’s been a rough ride for us. We indeed have a new hope in The Force Awakens, Episode 7, which not only has the promising JJ Abrams at the helm, but we’ll also see our beloved trio on screen again, even though they may be looking a little haggard. Well, all that travelling at light speed isn’t good for the complexion.

But what made the prequels even more intensely awful for me was that as I started to become more observant, I began to see meanings in the original movies that surprised me. And guess which film had the most interest now? That’s it, Empire Strikes Back.

In this movie, Luke trains under Jedi Master Yoda. His knowledge of The Force becomes more profound as Yoda explains and demonstrates its power.

During Luke’s training, he practices moving small rocks around with The Force. Yoda then insists that he raise his sunken spaceship from the swamp in a similar way. Luke tries but is defeated, ‘It’s too big!’ he gasps as he struggles to catch his breath. Yoda admonishes him for attributing such importance to physical size, which is irrelevant in the face of the all-powerful Force. But Luke is unconvinced and scoffs, ‘You want the impossible!’

Then to his amazement, and a rousing musical surge from John Williams, Yoda raises the ship clean out of the water and back onto land with just his two little outstretched yellow claws and a concentrated expression.

Luke is dumbfounded and exclaims, ‘I can’t believe it!’ and Yoda replies, ‘That is why you fail’.

The link to Jewish philosophy is astounding. Rabbi Dessler explains that Nature is simply a series of miracles we have become used to. There are many levels in which humans can relate to Nature, but those on the highest levels see Nature not as something independent from God, running along its own principles and laws, but as a function of God’s ongoing and continuous intervention. They feel God in every single detail of the world around them (feel The Force!). Furthermore, since natural processes are merely manifestations with G-d’s will, these people can perform ‘miracles’.

Rabbi Dessler brings the famous example of Rabbi Chanina Ben Dosa. His daughter poured vinegar into the Shabbos lights instead of oil, but Rabbi Chanina was unphased, saying ‘Let the One Who says that oil should burn say that vinegar should burn,’ and it did! For Rabbi Chanina, oil only burns because Hashem says it should, so if Hashem wants vinegar to burn, so be it. Rabbi Akiva Tatz points out that a sign of someone on this level is that he will register no surprise at all if vinegar will burn.1 Everything is just a function of Hashem’s will, so what’s the difference between oil burning or vinegar burning?

Ok, so lighting Shabbos candles is hardly as dramatic as raising a spaceship out of swamp, but then principle is the same, just substitute ‘God’ with ‘The Force’. Luke’s inability to believe in the omnipotence of The Force means that he cannot perform ‘miracles’, he is too bound by the ‘natural’ reality – and that is why he fails. Luke needs to work on his emunah (faith)!

And what about the imperative for the Jedi to control his emotions? This is Jewish character development, or tikkun hamiddot, to its core! Yoda and Obi Wan repeatedly warn Luke against anger, fear, aggression and hatred, all characteristics that lead to the Dark Side. These emotions are as abhorrent in Judaism as in Jedi-ism, and Luke is continually battling to control himself. As a Jew is required to conquer his negative characteristics, so is a Jedi.

It would be nice to think George Lucas studied Jewish writings before he conceived the philosophies of The Force and its Jedi Knights, but of course he didn’t, and there are many times that ideas in Star Wars contradict Jewish philosophies. As pointed out by The Unusual Suspect in his YouTube video,2 Luke only defeats Vader when he has practically thrashed him to death in a fit of rage. Hello? Hasn’t Luke been told over and again that rage is a trait of the Dark Side? How can he defeat the Dark Side when he’s just used its hallmarks?

So it’s true Star Wars is by no means a Jewish text, but some parts of it can help us understand aspects of Torah philosophy. And let’s hope The Force Awakens will present us with some more interesting analogies to unravel…and some stunning space battles too!

May The Force (aka God) be with you!

The Hurt Locker
Lessons from the Book of Jonah
Where Are We? The Body, Brain, Soul Problem
Dr. Sheila Nazarian’s Escape from Iran
Comments
MOST POPULAR IN Jewlarious
Our privacy policy
Aish.com Is Looking for Great Writers