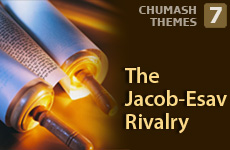 The physical-spiritual balance of power. 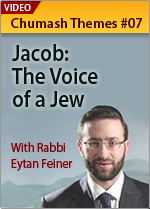 The second half of the Book of Genesis focuses on Jacob, the son of Isaac, grandson of Abraham. Jacob is the transition figure from the individual who serves God, to a nation that collectively represents God in the world.

A key to this transition is found in the difference between the children of Abraham and Isaac on one hand, and Jacob on the other. All of the patriarchs have more than one child.

This class will focus on the animosity between Jacob and Esav. What is unique about this struggle is that not only are Jacob and Esav brothers, but twins! Why such a struggle between two such similar people?

Furthermore, this battle is not only individually between them, but continues throughout history of the Jewish people. The archenemy of the Jews is Amalek, a grandson of Esav. The Sages teach an axiom: The actions of the forefathers portend the history of their descendants.1 Therefore a proper understanding of this clash will contribute to a clearer understanding of all of Jewish history.

The story in short: Isaac and Rebecca’s twin sons, Esav and Jacob, are physically and temperamentally different. Esav is interested in physical pleasures; Jacob in matters of the spirit. This difference comes out when Esav sells his birthright to Jacob for a meal. Later, when Isaac prepares to bless the firstborn, Rebecca encourages Jacob to masquerade as Esav and receive the blessings in his place.

This rivalry begins even before they are born. The verse says: “And the children battled inside of [their mother]” (Genesis 25:22). Rashi2 explains that when Rebecca walked by a yeshiva study hall, one of the fetuses kicked and tried to come out. And when she walked by a house of idol worship, the same thing happened. This dichotomy confused her and she went to consult with a great sage, Shem the son of Noah. He told her that she carries within her two diametrically opposed nations: When one falls, the other will rise, and vice versa.

Such a story would seem to negate the concept of free choice. If prior to birth the boys already had a predilection to idolatry or Torah study, then how can they be held responsible for their actions, for either punishment or reward?3

The answer is that no person is a blank slate. We are born with tendencies both negative and positive. Each person is exquisitely balanced, and each person is responsible to make the best of his own mix. And one’s final accounting is then based on what I accomplish based on who I am, not against some external yardstick. The fact that Esav had one tendency and Jacob the opposite, is germane to their unique individual plan.

The story of their birth reveals a fascinating point. Although they are twins, they are far from identical. Esav is born first, all red and covered with hair. Jacob follows, holding onto his brother’s heel. By the omission of any details, Jacob seems to be a standard infant. As their childhood is described, the difference that was once apparent only to their mother, becomes more noticeable. Jacob is the quiet boy who studies in “the tent,” while Esav is hunting in “the field” (Genesis 25:27). What are these details meant to teach us?

The hair on a person is among the last parts to develop. Most babies are born with sparse hair on their head, and of course none on their body. That hair develops only with the onset of puberty and finishes growing as adolescence ends and full maturity is achieved. One of the unique aspects of a human is the growth process long after birth. Many animals are born fully grown, and even the higher mammals do not take more than a few years to develop.

In terms of human growth, the physical is a metaphor for the spiritual. Just as a person’s body matures, so too he is capable of ongoing emotional and ethical growth. Someone who is born with all his hair developed, however, is like a person who will not grow anymore. Actually, Esav’s very name means "ready-made."4 Overcoming this is Esav’s challenge.

This split between Jacob and Esav is brought into focus when they become teenagers. The Torah recounts that on the day that their grandfather Abraham died,5 Esav was out hunting. He returns to find Jacob preparing a mourner’s meal for their father, Isaac. Esav asks to be fed immediately. Jacob replies, “I will feed you in return for the sale of the birthright.” Esav contemplates what the birthright means and agrees. Jacob gives the food and thereby acquires the rights. This watershed event changes the whole dynamic of their relationship, and ultimately of human history. What exactly is the birthright?

From Esav’s rational for the sale, we can understand what he was selling. He says, “Behold I am going to die, and what purpose is this birthright?” This implies that it is not something material or monetary, since Esav himself was in constant pursuit of wealth and possessions. Rather, the birthright is spiritual, and Esav is basically saying: What purpose is there to a spiritual possession when I believe that all existence is transitory and there is nothing immortal?

Jacob’s perspective was the exact opposite. For him, the physical world is transitory and the spiritual world is permanent.

The truth is that both are partially correct. The spiritual world is paramount; however the physical world is necessary to properly accomplish the spiritual. God’s original plan was that Esav and Jacob would be partners, each contributing his strength. Esav, as the expert in the physical world, was to provide the financial and logistical backing for Jacob’s spiritual endeavors. In such a case, with each complementing the other, their twining is perfectly clear.

Of course, such an arrangement would require Esav to recognize the transitory nature of the physical world, and acknowledge that his is a supporting role. However, Esav is not willing to do that. So he sells this privilege to Jacob. The partnership is effectively severed, and for the next period of their life this arrangement works fine. But when Isaac decides that the time has come to bestow the blessings – i.e. to formalize his children’s role and direct the resources that God has granted to each of his children for the betterment of the world – then the argument starts anew.

Isaac, in his spiritual heights, sees only good. He thinks that God’s original plan is working and his twin sons are together building harmony between the spiritual and physical worlds. Therefore it is correct to give over to Esav stewardship of all physical attributes, specifically the Land of Israel.

Rebecca, Isaac’s wife, realizes that this approach is fraught with danger. She knows that Esav will use this gift for his own purposes and not provide for Jacob. So in order to rebalance the power, Jacob needs to take on both responsibilities, the spiritual and the physical. In other words, he needs to be both “Esav” and “Jacob.” That’s why Rebecca orders Jacob to disguise himself as Esav and receive the blessings.

This masquerade represents the crux of the idea. And that is why, when Isaac asks, “Who are you?”, Jacob can respond, “I am Esav your eldest.” He is now acting as Esav. If anyone was fooling Isaac, it was Esav, who allowed Isaac to think that he supported this partnership.

History provides us with an example of how things work when there is an ideal state of balance between the two powers. Approximately 2,000 years ago, the Roman Emperor Antoninus traveled every day through a secret underground tunnel to assist the leader of the Jewish people, Rebbe Yehuda HaNasi.6 In return, Rebbe Yehuda taught Antoninus the Torah’s wisdom, and eventually Antoninus became a righteous convert.

Most of the time, however, these two powers have not worked in confluence. And because the two are so closely linked, they always maintain an inverse proportion. As the Torah says (Genesis 25:23): “The two nations will not become great simultaneously.”7

In the world that God created, there is a constant to and fro between these two ideas. A world predicated on “the physical to serve and enhance the spiritual” cannot coexist with a world that venerates the physical as its inherent goal. If Esav and his heir Amalek rule, then the world has negated spirituality and the Jewish idea is consigned to mockery. But, if the Jewish people are ascendant, then by definition the spiritual energies will guide the physical.

It is a historical see-saw: sometimes one power is up, and sometimes the other. That is the metaphysical reality. For as the Talmud says, “Don't believe someone who says that both Caesarea and Jerusalem have been built up.”8

Amazingly, this very idea is the root of anti-Semitism. The Midrash9 says that when Esav was getting old, he called in his grandson Amalek and said: "I tried to kill Jacob but was unable. Now I am entrusting you and your descendents with the important mission of annihilating Jacob's descendents – the Jewish people. Carry out this deed for me. Be relentless and do not show mercy."

Why is the philosophy of Amalek so destructive to the Jews? The Talmud explains, based on the biblical verse that describes how Amalek “happened (karcha) upon" the Jews.10 The Hebrew word "karcha" literally means happenstance. Throughout the generations, Amalek has championed the idea of random coincidence as the operative force in world events. Thus the verse continues: "And [Amalek] did not fear God."

By contrast, the Jews have always firmly believed in Divine Providence – i.e. all that takes place is the direct hand of God. Of course, these two ideas stand in direct contradiction and cannot coexist.

This creates not just rivalry, but enmity. Following the Exodus, Amalek attacked the Jews even though Amalek lived in a distant land and was under no imminent threat.11 It was an act of pure hatred.

And straight through history, this has been an anti-Semitic refrain. The Book of Esther (3:1) identifies Haman as the direct descendent of Amalek. And the Talmud12 singles out a nation called “Germamia of Edom” as descending from Amalek. And to quote Hitler: “The Jew has inflicted two wounds on mankind: circumcision on the body and conscience on the soul.”13

And the battle continues to this day. Our world has been blessed with unimaginable amounts of wealth. Are we descendants of Jacob, using our assets to further our spiritual pursuits, and bringing humanity closer to God? Or do we, like Esav, wallow in pleasure with no purpose beyond the earthbound?

This question is the crux of all we do. For after all, this is Jewish destiny: to bring the world to realize the beauty and power of the transcendent, and to utilize all our material possessions for that purpose. Will we rise to the challenge?