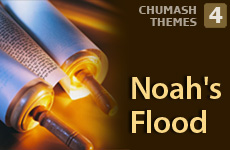 Unraveling the cause of the Flood, and Noah’s preeminent role. 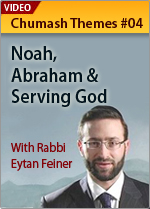 The story of Noah is one of the most well known stories in the Torah. Who does not know the word “antediluvian”? Or at least, who does not have a picture in their mind of the poor giraffe with his head stuck out of a skylight in the top of the Ark, in the rain!

To review the story in short: the world is filled with evil, aside from Noah. Noah is told to build an Ark for his family and the animals. Two by two, the animals come and fill the Ark. It rains for 40 days, and the entire world – except for those in the Ark – is destroyed. Noah, his family, and the animals leave the Ark, and the world is renewed. God sends a rainbow, and promises Noah to never again destroy the world.

There is much more to the story than meets the eye. We will explore these five areas:

What did the Generation of the Flood do?

The episode of the Flood begins with a description of the descent of the human race into evil. There are two specific offenses mentioned: rape and larceny.1 These are very severe transgressions, but this is not the first time humanity erred. Six generations prior to Noah, man stopped believing in God, and was punished.2 However the consequences were not as severe and the world continued to exist. Rejection of God would seem to be deserving of a stern punishment, so why do rape and larceny get far more terrible retribution in the time of Noah?

We find in the verses that these two sins are extremely specific. First, the upper class are accused of taking women as they desired.3 Second, the world was filled with larceny.4 What caused this ultimate punishment was abuse of authority to take advantage of the less powerful. The larceny was more than stealing, but a climate of exploitation of the impoverished. They did not steal outright, but purchased under duress what people did not want to sell. This sanctimonious theft is worse than outright robbery.

This is considered more severe than rejecting God. Such a society where even the leaders are abusing their power cannot continue to exist.5

This is not only a sin, but it is the opposite of the purpose of creation. In Psalms6 it says that the world was created for kindness (chesed). This is not just kindness as a character trait, but a view of the world as a place for being a giver rather than a taker. Man was placed in this world not to accumulate power and goods, but to contribute to society. What had transpired in the generation of the Flood was a perversion of the purpose of creation. This was a society of takers rather than givers.

Rejection of God does not bring such severe consequences as this, since there still exists the ability to reaccept him. However, abuse of power and authority is more difficult to undo. Maimonides writes7 that someone who does not accept guidance will not return. This is because the ability to hear another opinion is the prerequisite for change. In a society where the rulers abuse their power, they will definitely not hear the call for change, and they will continue to sink into decadence. Therefore, if the purpose of creation was nullified, the world must be recreated in a new fashion.

It is axiomatic that God is not capricious, and therefore the punishment he metes out is not revenge, but as a means for man to learn from his mistakes. Therefore if we are informed of the details of the destruction, there is something for us to learn. We can gain at least three insights from this episode.

1) Going back to the beginning of Creation, the primordial state of the world was water.8 Since the world was created for man’s use, when he is undeserving of the world, it reverts to the original pre-human condition.

More specifically, water is known as the universal solvent. The Hebrew word for the flood is ‘Mabul’, which comes from the root ‘to dissolve’. As we learned earlier, the failure of humanity was through the abuse of power and the dissolution of society. The appropriate punishment therefore is that the world is immersed in water, and all humanity is dissolved to nothingness.

2) Many facets of Jewish life involve immersion in a mikveh, a ritual pool. The power of a mikveh is to purify and renew. Thus the final act of conversion, for example, is to immerse in a mikveh. Just as a fetus emerges from an aquatic environment to a “new life,” so too the convert is born anew.

In the time of Noah, the world required immersion in a mikveh, so to speak, in order to be purified and created anew. In this regard, the number 40 is significant: It rained for 40 days, corresponding to the standard volume of a mikveh, to se’ahs.9

3) On a kabbalistic level: the world was primarily created with chesed (kindness). However, this is tempered by din (judgment). These two concepts are represented by fire (judgment) and water (kindness). We pointed out earlier the transgressions of the people were in the realm of taking what was not theirs, the opposite of kindness. Therefore it is appropriate that the punishment come through an overpowering use of kindness, represented by water. This then wipes the slate clean and the world can be renewed.

Why an Ark? And Why Noah?

In order to survive a flood, Noah needs a boat. A cursory examination of the Ark’s description makes one realize that all the storybook visualizations of it are incorrect. The Torah describes it as roughly the size of a football field – 300 cubits by 50 cubits.10

As we said earlier, “the world was created for kindness.”11 God Himself, having no lack and no needs, created the world in order to bestow His kindness on others.12 And man, created in the image of God, is to likewise do kindness for others.13

The actions of man leading up to the flood – as takers rather than givers – were the antithesis of this. Thus for the world to continue, there was a need for some supreme act of kindness and good. Thus the person who would save the world, and be the seed of a new world after the flood, must embody completely selfless kindness with no thought of recompense. This was the trait of God when he created the world and provided for all the creations. The man who is to ride out the flood must embody this quality.

Noah is introduced to us a tzaddik, a righteous individual. Usually we picture a tzaddik as an ascetic Godly person. Here we are introduced to a different approach. Noah’s righteousness is his care and concern for all creatures, which enhances his closeness to God.

It was part of God’s plan that Noah should take responsibility for the world. So instead of miraculously saving the world, God gave Noah the opportunity to participate in the salvation: Noah took out his hammer and nails and built the Ark.

Noah’s act of giving was manifest most intensely during the year that he spent in the Ark itself. Realize that Noah was responsible for the feeding and care of every species, the remaining population of the world.

Noah takes this responsibility extremely seriously. He studied the eating habits of the different birds to ascertain what type of worms they each eat. Since each species eats at a different time of the day, Noah and his family worked around the clock to provide their food at the most natural time. He even brought shards of glass to feed the ostriches who use this to grind the food in their stomachs.14

Noah rose to this occasion and took responsibility for the entire world. For this supreme act of kindness, he deserved to survive and bring the world to renewal.

When the waters finally receded, all that was left were the people and animals in the Ark. When they leave the Ark, a rainbow appeared in the sky.15 The refraction of sunlight through moisture; God was intimating that even though water was the vehicle of destruction, Noah had created a beautiful connection between God and man. Noah had shown that he was a caretaker for all creation, rather than just a taker for his own needs. Therefore, God vows that if the world can produce one human like this, it will never be faced with destruction again.

Judaism cultivates an appreciation of the beauty of nature, and teaches us to make special blessings when we encounter impressive natural wonders such as the sea, spectacular mountain heights, and so on.

Thus we make a blessing upon seeing rainbow. Uniquely, this blessing focuses on God's covenant with Noah which was sealed by the special sign of the rainbow. The blessing praises God "Who remembers the covenant, and is faithful in His covenant and fulfills His word."

In this sense, the rainbow has a dual message: God sees reason to bring destruction upon the world again, but is refraining, so to speak, out of deference to the promise made to Noah. For this reason, one should not gaze excessively at a rainbow.16 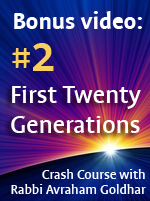 The story of Noah continues with a description of Noah’s three sons: Shem, Ham, and Yafet. From them the entire world is recreated. An analysis of their names leads to an understanding of their function as prototypes for humanity. Ham in Hebrew means heat. This is the aspect of a person who is active and physical. Yafet is based on the root ‘Yafeh,’ beauty. This is the esthetic and artistic side of man. Shem in Hebrew means name. A name is the essence of a person17, and this refers to man’s ability to delve into himself and find an essential core of knowledge.

For the first time, we find a description of a family rather than a passing of generations from father to son. The world is now entering a phase where instead of God’s interaction with individuals, there are families and a diverse humanity, each one with a unique role in the service of God. This leads to the seminal 70 nations that exist at the time of the Tower of Babel.18

Chumash Themes #1: Introduction to the Bible
Baked Burik Recipe
Blocked Goals and Anger
Why the Mezuzah is Placed on a Slant
Comments
MOST POPULAR IN The Bible
Our privacy policy