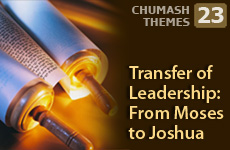 A Jewish leader must combine bold initiative, with a deep sense of humility. 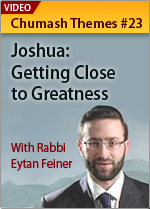 The idea of transition of leadership is something that modern management science deals with comprehensively. Google the words “Moses Joshua transition leadership” and you’ll see a well-known management consultant applying this biblical account as a lesson for modern companies.

Be that as it may, let us examine how the Torah views this changeover:

For a nation, there can be no greater transformation than going from nomadic dwelling in the desert, to living in one’s homeland. On the other hand, the Torah is unchanging and immutable. How should the Jewish people move from one type of existence to another, while remaining true to Torah ideals?

Even more basically, how does one prepare for such change? By definition, change is something new and usually unexpected. How do you choose someone who can adapt to these new situations? And how do you train that person?

In the nascent Jewish nation, there was one person who had demonstrated the potential to achieve a successful transition of leadership from Moses: Joshua.

We will deal with the following issues:

The first time we meet Joshua, he is a general leading the Jews to war against Amalek.1 Remember, this is a scant month since the Jews had left Egypt, after being enslaved for generations. A people whose life experience was limited to servitude should be incapable of war. Yet Joshua was the exception, an independent force who rose above the crowd and became a leader.

How would we expect Joshua to spend the remaining 40 years in the desert? One might imagine a career as a maverick, always testing the boundaries of Moses' leadership. However that was not the case. Throughout the Torah, Joshua is always described as subordinating himself to Moses:

Joshua is that rare individual who realizes his own capabilities, but retains clear perspective where others are more capable. Joshua appreciates the greatness of Moses, and subordinates himself to learn whatever he can. This is done by completely attaching himself to Moses and never leaving his side. As described in the Torah, “[Moses’] aide Joshua, a youth, did not leave the tent."5

There are two primary approaches to transmitting knowledge: 1) by rote memorization, or 2) by teaching principles that can be applied to new and evolving situations.

The first method is simple to do and even easier to measure. Can the student spit back the memorized knowledge? The second method is much more difficult, for both teacher and student.

The Talmud has much discussion about the correct method to teach Torah. The optimal method is called Shimush Talmidei Chachamim – the service of a Torah Sage.6 This entails not only formal study, but also living with and observing the mentor in all types of circumstances. By carefully observing the nuances, the student gains far more insight into the teacher's approach, and from there can extrapolate how the teacher would respond in a variety of other situations.

This helps to explain another anomaly. The Torah tells of the heroic deed of Pinchas, who jumped up with spear in hand to save the Jewish people from a plague of immorality. When the moment called for bold action, Pinchas was ready and willing to step forward. Pinchas is praised extensively, and rewarded for all generations.7

So when God announces who will become the successor to Moses, surprisingly, it is not the heroic Pinchas. Why?

True, Joshua did not perform any incredible heroics that earned him front-page headlines. But in his own quiet and consistent way, Joshua made it his priority to draw close to God, absorb Jewish wisdom, and do whatever he could to help others do the same. In fact, the Talmud says that Joshua came to the synagogue early each morning – to help set up the chairs!8

Think about it: These humble acts of dedication are what God values most, even more than dramatic demonstrations of bravery and heroics.

Thus Joshua is the choice to lead the Jewish people in the crucial next stage of development. He will take the laws that Moses taught and apply them to a new and different situation, as Moses himself would have.

Torah is not in Heaven

This begs a more basic question: Why are we so overly concerned with this transition? Just as Moses, whenever he was in doubt, would ask God what to do, so too let the next leader of the Jewish people could do the same. After all, God does communicate with Joshua and many later prophets. So why can’t we rely on Joshua to be informed of God's laws directly?

After the demise of Moses, prophecy changes. Henceforth, prophets can admonish and warn the people, but they cannot introduce new laws. In talmudic terms, “Torah is not in Heaven."9 God’s giving of the Torah via Moses is final. At that point, God says, "The Torah is in the hands of the Sages to interpret and clarify, according to the rules of derivation that I commanded to Moses. From here on, I give you control of all decisions to be made."10

This is God's greatest gift to man, the ultimate expression of His trust in our logical abilities and in our responsible use of free will. Obviously, there is a detailed system for figuring out the will of God. But the path we take toward destiny lies in our own hands. That’s why the choice of leadership is so crucial, to ensure that he be of sterling character and true to the teachings received by Moses.

The Torah itself emphasizes this point. The last verse in the Torah refers to "all the great actions that Moses performed in front of the entire nation."11 Rashi explains that this refers to his smashing the Tablets of Law when he sees the Golden Calf. Is this truly the final praise of Moses? What about his taking the Jews out of Egypt, leading them through the Red Sea and to Mount Sinai?!

The answer is that smashing the tablets was an act decided by Moses alone,12 the clearest example of taking matters into one’s own hands with a result that was pleasing to God. Thus the Torah cites this as a bridge between one phase – the learning period when everything is asked from God – and the next phase, when man is expected to make his own correct choices.

What are the specific leadership qualities that Joshua possessed? Let’s examine the verses where Moses articulates the attributes of a leader.

Notice the mention here that God is “the spirits of all flesh." The word “all” emphases that the leader is not merely for the masses, but also for the individuals. Just as Moses was chosen to be the leader because of his care of each individual sheep in his flock,13 so too should his successor reflect that ideal.

Another key point is “go out before them.” The battle cry of the modern Israeli army is “Acharai” – after me. The officer leads from the front.14 The source for this type of leadership is this verse. Moses does not look for someone who will sit in the office and direct his minions to go out into the field. He is looking for an active hands-on leader.

One more point: Often times the outgoing leader clings to the reigns of power, jealous of the young person taking over. The concern is even greater in a situation like this, where Moses will not live to see the culmination of his life work, and will not lead them into the Promised Land. 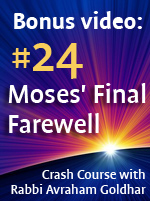 Yet we see the greatness and humility of Moses, who specifically requests that God appoint a successor.

Transition can often be traumatic. As a new leader takes over, a nation often finds itself adrift and rudderless. Moses rises above himself and initiates the continuity of leadership. Joshua has proven to have two almost contradictory traits: On one hand, initiative and leadership as seen in the war with Amalek; on the other hand, the ability to subjugate himself to one who is greater.

Thus Joshua is uniquely equipped to not only continue the tradition of Moses, but also to transition the Jewish people into their permanent home in the Land of Israel. The events of Joshua’s leadership reign are recorded in the first book of prophets, Joshua.

Chumash Themes #1: Introduction to the Bible
What Makes Eli Run?
The Tyranny of Materialism
Science Enters the Mysterious Inner World of Consciousness
Comments
MOST POPULAR IN The Bible
Our privacy policy