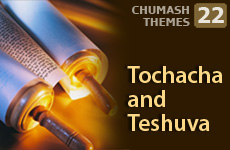 We all face a personal choice with world-resounding implications. 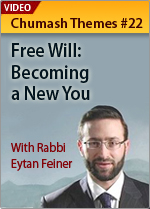 We all face a personal choice with world-resounding implications: Will we be a part of the ongoing endeavor of bringing the world closer to moral and ethical perfection through an engagement with God in our daily lives? Or will we live a life devoid of any internal content, disconnected from the eternal?

As a nation, the Jewish people face the same choice. Will we be a light unto the nations, or will we be a nation as any other, without a unique connection to God and history?

And what is the nation who was charged to be a light unto the nations to do when they do not fulfill their purpose, but rather ignore the eternal dimension in this world?

The last part of Deuteronomy seems quite terrifying. From chapter 28 onward, there are descriptions of the afflictions that will affect the Jews if they stray from their connection with God: “You will become so desperate that you will eat the flesh of your own children” (Deut. 28:53), and the apocalyptic: "Sulfur and salt will burn the entire land” (Deut. 29:22).

Why is this the finale of the Torah? What is the purpose of these terrifying prophecies?

Deuteronomy is Moses' last will and testament to the Jewish people. The earlier part of the book reviews the laws they’d learned during the previous 40 years in the desert. The latter part has Moses prophesizing the future of the nation. But because humans have free will, a precise history cannot be foretold. Rather, Moses tells the Jews what choices lie before them: If your connection with God remains strong, that will guide and empower you to affect the entire world for good. But if not, the results will be catastrophic. (Although, ultimately, the Jewish people will reconnect with God.) In this final soliloquy, Moses is trying to guide us in choosing the proper path through history.

These parts of the Torah are known as the tochacha. Tochacha is commonly translated as “rebuke.” However, the actual meaning is “to provide proof.” The purpose of tochacha is as a prerequisite to teshuva – return to God and to self. In order for a person to return, he must first acknowledge that he was lost. But human beings have a propensity to deny their faults, So tochacha is like holding up a mirror, providing irrefutable proof of self. And that, ultimately, is the only effective rebuke.

This is the message of the last part of the Torah: The challenges and consequences of choices, and the ever-present opportunity for personal and universal perfection.

We will focus on a few aspects of the process described here:

In Deuteronomy 28:47, the Torah seems to identify the focal reason for all these punishments: “Because you had an abundance of everything, you did not serve the Lord your God with joy and a glad heart.”

This reproof seems overly harsh. After all, the verse does not say that the mitzvot were transgressed. It says that you did serve God, but even when God provided an abundance of good, you were not joyful and glad in your service of God. Yet why should that be a problem? If I fulfill my basic obligations, what difference does it make what’s my frame of mind? How can it be that following all the laws results in a bitter exile?!

Rabbi Simcha Bunim of Peshischa (whose name, Simcha, itself means happiness) explains the depth of this verse.1 The Torah is trying to get to the root of the disease. Why would the Jewish people reject the Torah? Because of a lack of vitality in the connection. Joy comes when what a person’s actions connect with his essence. This stimulates those activities to be performed completely and correctly. But when joy is lacking, the actions become slipshod. Therefore, the Torah says, it is imperative to be joyous in the service of God. Otherwise, lack of joy and its byproduct – half-hearted observance – will necessitate corrective consequences from God.

Practically speaking, how are we to find joy in the service of God? The 13th century Sefer HaChinuch2 points out that many of the mitzvot reflect natural human behavior. For example, there is a commandment to marry and have children. This is something that people generally desire and are happy doing on their own. Similarly, Shabbat relates to our natural need to recharge physically, and the mitzvah of chesed (kindness to others) is also a natural instinct.

So by reinforcing the natural parts of person’s life – and by making it a mitzvah – God is allowing us to serve him naturally with joy. And the idea is that as the general tone of life fills with contentment, all service of God will be done with “joy and a glad heart.”

There is one other passage in this section that seems crucial to an understanding of Jewish history. Deuteronomy 29:9 describes the mutual obligation of one Jew to another. It is not enough to say, “I am fine, and what happens outside my home, community, etc., is not my problem.” At Sinai, the Jews took on a mutual obligation toward each other. We willingly tied our fate not as individuals, but as a nation.3

There is a special kabbalistic prayer before donning tefillin, which says: “I am performing this commandment for myself and all other Jews.” No one person can fulfill all the mitzvot. Some are for women and some are for men. A Torah scholar can study, but a farmer can more readily separate tithes. There are mitzvot that only a kohen can do, and there are even the ones we do not want to have to do, such as the laws of mourning. But the entire Torah is the sum total of the actions of the entire Jewish people. Therefore, my actions are added to the rest of the nation to create a complete Torah.

So just as with any organization, the mutual good requires interaction and teamwork, that’s the way it is with the Jewish people. That is why, in times of national crisis, the greatest Torah scholars are held most accountable, because of their obligation to the community.4

This sense of mutual responsibility has been the Jewish secret throughout the long exile: Although we may be scattered throughout the world, we stand together as one nation.

As an example, look at the Ethiopian community. A group with vastly different Jewish customs, they decided that the time had come to rejoin the Jewish homeland and make aliyah. The entire Jewish world joined in unison to facilitate this. This sense of a shared destiny is the glue that has held the Jewish people together throughout our history.

In Deuteronomy 29:9, Moses tells the Jewish people that even though the past 40 years had grievous mistakes – rejecting God with the Golden Calf, episodes of complaining, and accepting the spies’ negative report about the Land of Israel – "you are still standing here today about to enter the Land.” Despite it all, we are given a very powerful and encouraging message.

Then, at the end of this section (30:2), we are told: “And you will return to your God.” The goal of all wandering and exile is to reconnect the Jewish people with God. All of this reproof is from love and not vindictiveness. Teshuva is the grand finale of the process. This is the final message of the Torah.

This same concept is found in probably the most pessimistic book of the Bible – Eicha (Lamentations). This was written by the prophet Jeremiah as the first Temple was being destroyed, and today we read it in the synagogue on Tisha B’Av, the Jewish national day of mourning. Eicha is read sitting on the floor in a mournful minor key, with the lights dimmed.5 However, its end is triumphant and read aloud together by the entire community: “God, bring us back to You, and we will return. Renew our days of old.” This is the finale to the exile. What we ask for is not to glory or riches, but redemption and return to closeness to God.

By internalizing what we lost, we are able to articulate what we truly desire. This is the method of “consequences” that enables us to learn the lesson that God is teaching.

It is interesting that there is no mention here of the Messiah. Wouldn’t one expect that the prophetic final scene of Jewish history – after all the exile and suffering – should include the Messiah?

The answer to this question is linked to the Messiah as a descendant of King David. An analysis of King David’s genealogy and life would lead one to think there is some mistake here: Each aspect seems incorrect and against Jewish law.

It is quite shocking to think this is where the holy Messiah comes from! What is the possible explanation?

The answer is that in every one of these circumstances, there is tochacha followed by teshuva. Consider: 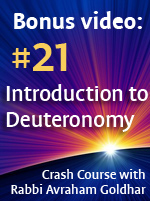 Ultimately, all these episodes bring about an energy of teshuva, from which the Messiah is but a consequence.

Now we can answer our original question: Why does this prophetic portion include no mention of the Messiah? The reason is that the Messiah is someone who comes as a result of our actions and teshuva, not someone who descends upon us from Heaven. Therefore, instead of discussing the Messiah, we are taught about the actions that will lead to him.

This is the lesson of the end of the Torah. Teshuva is a personal choice, with world-resounding implications. From the individual choices that each person makes will come the completion of the goal of humanity: an ethical, Godly society. As such, accepting personal responsibility is ultimately the key to perfecting the world.

Chumash Themes #1: Introduction to the Bible
Baked Burik Recipe
Blocked Goals and Anger
Why the Mezuzah is Placed on a Slant
Comments
MOST POPULAR IN The Bible
Our privacy policy