History Crash Course #14: Joshua and Conquest of the Promised Land 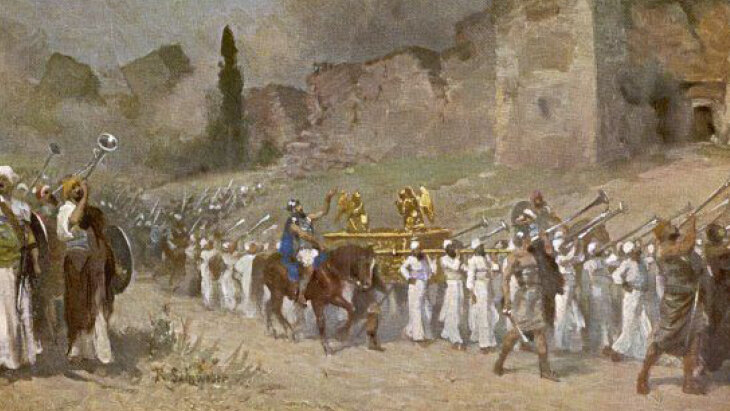 This is no typical war of conquest.

The Book of Joshua begins:

And it was after the death of Moses, the servant of the Lord, that the Lord said to Joshua the son of Nun, Moses' minister, saying, "Moses my servant has died and now arise and cross the River Jordan. You and all this nation go to the land which I give the Children of Israel. Every place on which the soles of your feet will tread I have given to you, as I have spoken to Moses. No man shall stand up before you all the days of your life. As I was with Moses, so shall I be with you. I will not weaken my grasp on you nor will I abandon you. Just be strong and very courageous to observe and do in accordance with all the Torah that Moses my servant has commanded you. Therefore, do not stray right or left in order that you will succeed in wherever you go."

Joshua is one of the great leaders of Jewish history. The Talmud says: "The face of Moses was like the face of the Sun, while the face of Joshua was like the face of the moon." 1 This is understood to mean that the greatness of Joshua was reflection of his teacher, Moses, which is a tremendous compliment. But it also tells us that just as the sun is much greater than the moon, which only reflects sunlight, so too, had Moses lived to enter the Land, all of Jewish history and all of human history would have been different.

After the death of Moses Joshua leads the Jewish people for 28 years.2 The Book of Joshua describes the seven years of conquest and seven years of settlement of the Land of Israel. After the land is conquered is divided into separate tribal portions via a divinely guided lottery. The Book of Joshua also describes the Biblical boundaries of the Land Of Israel.

At this time the so-called Promised Land is bounded by the Egyptian empire to the south and the Mesopotamia to the north. But it is not ruled by either of them. In fact, there is no one power ruling this section of land, rather it is settled by seven Canaanite tribes who inhabit 31 fortified city-states scattered all over the map, each ruled by its own "king."

(Jericho is one of these city-states, so is Ai, so is Jerusalem, where Canaanite tribesmen called Jebusites dwell.)

Before they enter the land, the Jewish people send an envoy to the Canaanites with the message, "God, the Creator of the Universe has promised this land to our forefathers. We are now here to claim our inheritance, and we ask you to leave peacefully."

Needless to say most of the Canaanites don't. (Only one tribe takes the offer and leaves.)

Meanwhile, Joshua has clear instructions from God that if the Canaanites don't get out, the Jews must wipe them out, because if they remain in the land they are going to corrupt the Jews. It is made clear that the Canaanites are extremely immoral and idolatrous people and the Jews cannot live with them as neighbors.

This is like saying today that living in a bad neighborhood messes up your kids. You have to always be careful about outside influences.

THE BATTLE OF JERICHO

The people go into the land and they fight a series of battles. The first is the battle of Jericho, the entrance to the heartland of Canaan.

Some archeologists have suggested that the easy conquest of this heavily-fortified city was made possible by a well-timed earthquake. But isn't it remarkable that precisely when the Jewish people need the city to fall, there is an earthquake and it does? No matter how you explain it, it is still miraculous.

The waters of the Jordan miraculously stop flowing and they cross on dry land, then the Jordan refills with water. Next they march around the city walls, which crumble before their eyes. They conquer the city, taking no booty as commanded by God.

It must be clear by now that this is not the typical war of conquest such as we read about in human history of bloody warfare, of raping and pillaging. God has said, "Nothing like that here. And if you follow My instructions all will go well."

ONE FOR ALL AND ALL FOR ONE

The Jews move on to the next city-state, a place called Ai.

But here things don't go so smoothly. In fact, they meet with a terrible defeat with many of their number killed. Traumatized by the experience, they plead to know why God had abandoned them and quickly learn the terrible truth -- that one person, Achan, had stolen some items back in Jericho.

One person out of 3 million didn't listen to God and everyone suffers!

One person out of 3 million didn't listen to God and everyone suffers!

The fascinating thing here is that the Bible seems to be saying that obedience to God's commands is paramount and that as far as the Jews are concerned -- it is all for one and one for all.

As an outgrowth of that lesson, Judaism teaches that there is such a thing as collective responsibility as well as individual responsibility -- no person is an island, each exists as part of the whole and is responsible for the actions of others as well as his or her own. Just as in the story of the Golden Calf, every Jew is the guarantor for his fellow Jew.

In today's world, the motto seems to be "Mind your own business," or "It's not my problem." If we operated on the same level as they did back then, most of the world's problems would disappear.

LIFE IN THE LAND

Despite many difficulties on the way, the Israelites do finally lay claim to the Promised Land but their life there is far from calm, particularly after Joshua dies. The Bible relates that they had only themselves to blame:

From a simple reading of the text, one might assume that the entire Jewish people abandoned the Torah and started worshipping idols. But this, in fact, was not true. As with the incident of the golden calf only a small percentage of the people sinned, yet the entire nation is held accountable.

As mentioned previously, the highly self-critical nature of this passage is typical of others which make the Hebrew Bible a document -- a holy book of a people, but also relating the sinful history of this people. The exaggerated focus on the mistakes-the self-criticism within the text- gives extra emphasis to the lessons that the Jewish people must learn from their mistakes.

There is no question that the criticism of the Jews in the Bible is hyper-criticism, but there are two reasons why the slightest offense by a small group of people is condemned so strongly:

Therefore, here God is driving home an important point to the Jews: You're on a very high spiritual level. If you tolerate even small indiscretions by a few, eventually these few are going to pollute the nation.

Indeed, this is eventually what does happen, but before it does, the Jews enjoy a honeymoon period in the land known as the Time of Judges.

History Crash Course #55: Jews and the Founding of America
Is Grease the Word?
Dried Fruit Compote
Scientific Curiosity and the Divine Encounter
Comments
MOST POPULAR IN History
Our privacy policy
Aish.com Is Looking for Great Writers