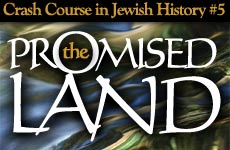 God gave Abraham the Land of Israel as a laboratory to create a model nation for the world.

The early history of the Jewish people begins in the Book of Genesis, Chapter 12, when God first speaks to Abraham, and continues through to the end with the death of Jacob and Joseph. This segment can best be described as the development of the "family" of Israel, which in the Book of Exodus will become a "nation."

We have already learned that Abraham was born in Ur Kasdim in Mesopotamia (today's Iraq) then moved with his father to Haran (today's northern Syria/southern Turkey) and that is where God instructed him to go to Canaan, the Promised Land, which will become the Land of Israel.

This is a key statement and the promise is repeated several times in Genesis. For example:

On that day, God made a covenant with Abram, saying: "To your descendants I have given this land, from the river of Egypt as far as the great river the Euphrates. The land of the Kenites, Kenizites, Kadmonites; the Chitties, Perizites, Refaim; the Emorites, Canaanites, Gigashites and Yevusites." (Genesis 15:18-21)

"And I will give to you and to your descendants after you, the land of your temporary residence, all the land of Canaan as an eternal possession and I will be a God to them." (Genesis 17:8)

We say that Judaism encompasses three core ideas: God, Torah and the Land of Israel. The Land of Israel is not a pay off. God did not say to Abraham: Support me and if monotheism spreads throughout the world, I will give you a good piece of real estate for your own. God gave Abraham and his family the Land of Israel as a homeland where his descendants are supposed to create the nation that's the model for the world.

The Land of Israel is a special place; it's the only place on the planet earth where the Jewish people can achieve their mission. A model nation cannot come to be anywhere else. So, it is very important to understand the Jewish relationship with the land.

And because it's a special place, a spiritually sensitive place, a place of tremendous potential, it's also a place where one has to behave in a special manner.

For the Land which you come, to possess it-it is not like the Land of Egypt that you left...the eyes of the Lord , your God, are always on it, from the beginning of the year to the year's end. (Deut. 11:10-12)

The Jews were only given the land because of their mission. If they abandon the mission, they lose the land. This is another very important lesson in Jewish history which is repeated, and it is also one of the most often repeated prophecies. The Jewish people will only live and prosper in their homeland if they maintain their relationship with God and carry on the mission of Abraham:

It will be that if you hearken to My commandments that I command you today...then I shall provide rain for your land in its proper time...that you may gather your grain, your wine and your oil...and you will eat and be satisfied. Beware for yourselves, lest your heart be seduced and you go astray...the ground will not yield its produce and you will be swiftly banished from the goodly land that God gives you. (Deut. 11: 13-17)

Throughout the early part of the Bible, God is constantly talking about giving the Jewish people the Land of Israel and reaffirming that commitment.

Indeed, the great 11th century Biblical commentator Rashi asks a question of the very first sentence in the Bible (SEE: Gen.1:1): Why does God begin the Bible with the creation of the universe?

If the Bible is a book of theology for the Jews, why not begin with the creation of the Jewish nation and go immediately to the story of Exodus. That's when the Jews become a nation, get the Torah, and go into the land.

And Rashi answers, stating that in the future, the nations of the world will say "you are thieves" to the Jewish people. You have stolen the land from the Canaanite nations. So God begins the Bible here at the creation of the universe to tell the world: "I am the Creator of the Universe. Everything is mine. I choose to give the Land of Israel to the Jewish people."(1)

Virtually every nation in the world bases its claim to its land on conquest. A people came (for example, the English or the Spanish) conquered the indigenous people (for example, the Native Americans) took the land, settled it, and called it by a new name (for example, United States of America). "Might makes right" is the historical claim of almost all nations in history. "To the victor belongs the spoils" or in this case the land.

This is an extremely important point that is often lost on modern Israeli politicians and those who seek to defend the State of Israel -- which is not a religious state and often far removed from Jewish values -- to realize that the Bible gives the Jews their only moral claim to the land.

Indeed, the early founding fathers of the modern state of Israel, even if they were not religious, were deeply steeped in the realization of Biblical heritage of the Jewish people and their connection to the land. Israel's first prime minister, David Ben Gurion, had an appreciation of the necessity of anchoring a modern, even secular Israeli state in the Bible and Jewish tradition. (We'll get more on Zionism later in the series.)

After Abraham arrives in the Promised Land, he is faced with a dilemma. His wife Sarah is barren, and she wants Abraham to have an offspring. So she suggests that Abraham take a surrogate wife, Hagar, who joined Abraham's camp when he passed through Egypt. Hagar is the daughter of the Pharaoh and she had elected to travel with Abraham as Sarah's maidservant. Great people have great servants. And so Abraham takes Hagar as his second wife and from that relationship is going to come a child by the name of Ishmael.

Ishmael does not carry on Abraham's mission. He will go off and found his own lineage; this is all recorded in the Bible, in the Book of Genesis, Chapter 16.

When we look back on history, we see that two great monotheistic faiths will branch off from Judaism during the last 2,000 years: Christianity and Islam.

Islam is a religion that originated with the Arab peoples more than 1,300 years ago. The Arabs, according to their own tradition and according to the Jewish tradition, are the descendants of Ishmael. One of the great attributes of Arab culture is hospitality. And the Bible tells us that Abraham was famous for hospitality.

It seems therefore that even though Ishmael does not carry on Abraham's mission he can't help but be great. Even though his descendents do not become the Jewish people, he carries within himself some of the greatness of his father Abraham. He's blessed. By the way, the Bible says specifically that Ishmael is going to be great and that he's going to be at odds with the rest of the civilized world.

When it is clear that Ishmael will not carry on the mission, God tells Abraham, who is then 99, that Sarah, who is 90, is going to become pregnant. And this is how Isaac is born, supernaturally.

As we noted earlier, this is one of the aspects of Jewish history-from its very beginnings it's supernatural. By all the laws of nature Abraham and Sarah should have died childless and the Jews nation never should have come into existence. The Jews certainly shouldn't have survived, yet they did and still are here.

"Your wife Sarah will bear you a son, and you will name him Isaac. I will establish My covenant with him as an eternal covenant to his descendants after him. And as for Ishmael ... I have bless him and I will make him fruitful and will increase him exceedingly. He will become the father of twelve princes and I will make him into a great nation. But I will establish My covenant with Isaac who Sarah will bear to you at this time next year." (Genesis 17:19-21)

So Isaac is the person who will carry on the mission of Abraham, the mission of the Jews. A rivalry will exist between Sarah and Hagar and their children, Isaac and Ishmael. Because of this rivalry Hagar and Ishmael will be sent away. (Jewish tradition notes that after Sarah's death, Abraham takes Hagar back as wife and he fathers more children through her.(2) ) This rivalry will carry on for generations is viewed as the metaphysical root of the modern rivalry between the descendants of Isaac (the Jews) and Ishmael (the Arabs)(3)

1) See Midrash: Breishis Rabbah 1:2; Rashi, Breishis 1:1
2) See Rashi on Genesis 25:1- Ketura is Hagar...
3)Muslim tradition, as portrayed in the Koran, re-inserts Ishmael back into the lineage of Abraham where he is usually mentioned before Isaac. (see Koran Sura II, verses 110-140.). It's also interesting to note that Moslems celebrate a holiday called Id al Adchah-The Feast of the Sacrifice, which commemorates Abraham's attempt to sacrifice Ishmael. (Note the Muslims altered the binding of Isaac story, Gen 22, and replace Isaac with Ishmael.)

History Crash Course #65: The State of Israel
It Takes A Lot Of Faith To Be An Atheist
How Instagram Brought Back This Nostalgic Soup
What Makes Eli Run?
Comments
MOST POPULAR IN History
Our privacy policy