Joshua: No Task Too Menial 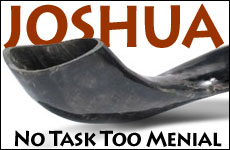 Want to be a great Jewish leader? Learn from a consummate example -- the prophet Joshua.

This Madison Ave. style slogan actually describes the attitude of one of the greatest leaders in Jewish history, the prophet Joshua. Many people know that "Joshua fit the battle of Jericho," but few know any other details of his character or life.

Clearly demonstrating that nepotism is not a Jewish ideal, neither of Moses' two sons was chosen to be the leader after him. Instead, the Almighty's favor rested upon Joshua ben Nun. What qualities did God perceive that led to this distinction?

Joshua didn't care at all about his own personal honor, only for the honor of the Jewish people. It reminds me of a quote a friend wrote in my 8th grade yearbook, "There is no limit to how far a man can go or how much he can accomplish as long as he doesn't mind who gets the credit."

Joshua would set up the chairs in the study hall, and put them away at the end of the day. He would sweep the room when it was dirty (he probably also ‘did windows'!). His respect for the learning of Torah governed his actions, not an arrogant sense that certain tasks are beneath his dignity or not in his job description. He merited fulfilling the description in Proverbs, "He who guards the fig tree will eat its fruit."

Joshua did not look for honor. He didn't check the latest polls and adjust his opinions accordingly.

When Moses died, Joshua was around 82 years old. His whole life had been about serving the Almighty and his servant Moses. Joshua rarely left Moses' side, to the extent of climbing part way up the mountain with him when he went to receive the Ten Commandments and waiting there for his return. He was totally willing to subjugate his needs and his ego to "serve the wise man."

This ability is . Looking around our world, we see few whose lives are totally about the service of others rather than themselves, even those who work for non-profit organizations! Particularly in America, with its worship of the individual, egos are hard and overindulged. Our leaders lack substance. It's hard to follow someone if it's all about them, if it's all ego and narcissism.

Joshua did not look for honor. He didn't check the latest polls and adjust his opinions accordingly. He stayed true to what he knew was right.

We are confused about the meaning of humility. We think of it as synonymous with meek. Yet our greatest leaders, particularly Moshe and Joshua, are characterized by their humility. They weren't afraid to lead, to voice unpopular positions, to chastise the people, to take responsibility.

Humility requires a commitment to do what's right, a commit that transcends our personal needs and desires. Few of us are able to achieve this, to rise above or conquer our egos.

Although Joshua led the Jewish people through many battles in their conquest of the land of Israel, his most successful battle of all was the one he waged against his own "evil inclination."

A leader who is a very powerful orator may win over followers. But only a leader who is able to take himself out of the picture can create something that will last. Only a man who dominates his ego, rather than allowing it to rule over him, could engineer the successful war for the holy land and then allocate it to each tribe in its assigned fashion.

Joshua has been immortalized in song for causing the walls of Jericho to come tumblin' down. But the ‘tumblin' down' of his ego was his true accomplishment and the real lesson for us.

Ruth vs. Orpah: The High Stakes of Life

Jonah and the Whale

The Book of Ruth: A Crash Course

Writing the Torah
Chukat 5782: Let’s Play the Blame Game!
The Sin of Moses: The Two Ways to Communicate
In Aftermath of Chicago’s July 4th Shooting, Local Moms Provide Countless Points of Light
Comments
MOST POPULAR IN The Bible
Our privacy policy