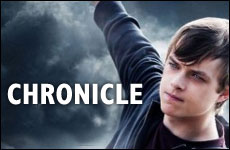 Josh Trank’s new film asks the question what would a teenager do if he had superpowers? Short answer: trouble.

Teens have it pretty tough.

Okay, maybe adults have it tougher. But teens, apart from having things expected from them, are totally confused. They want to think that they’re adults, but their parents treat them like kids. They’re constantly being told, “You’re my child, and you’re going to do what I say. Now act like an adult.”

No, you’re a teen. And there are differences:

I. WHAT YOU DO WITH YOUR TALENTS

What would you do if you had superpowers? Chronicle, the recent movie whose title does absolutely nothing to describe what the movie is about (as opposed to Snakes on a Plane), attempts to answer that question.

The answer? Pretty much what you’ve been doing until now.

You have talents now. Or you have money. A couple of people out there have both. Do you run around after dark and try to use it to help the less fortunate? Some do. Many want to, but it somehow never happens, through no fault of their own. Chances are, if we got powers, the exact same percentage of us would become superheroes.

Chronicle is the story of three teenagers -- Matt, Steve and Andrew -- who attend a party in an abandoned barn, which is where movie teenagers hold their parties when no one’s parents are out of town, and they find a cave in the wilderness. They jump right in, and lo as well as behold, there’s a meteor waiting to give them telekinesis -- the power to manipulate objects with their minds.

This is the real reason that kids want to be astronauts when they grow up. We keep telling them that meteors give people superpowers.

But these kids have obviously never seen a superhero movie before. If they had, they would know that if you get superpowers, you only have two career options: hero and villain. There are no super-powered accountants. The closest you can get is a mild-mannered accountant who disappears when there’s trouble and comes back with lame excuses, like, “It’s tax season.”

But the kids just continue being kids, albeit with powers. They use their powers to play practical jokes, eat large amounts of chips at once, and play football in the sky.

The truth is that most adults wouldn’t become superheroes either. Chances are, we would find a way to monetize it, even just to make things easier at work, like when we want to get something from the printer. It would also come in handy in traffic situations. Not to mention moving the car on alternate-side day, making the scale say lower numbers, and bringing out the garbage without getting week-old soup all over our pants. But at least we’d be…

II. THINKING ABOUT THE CONSEQUENCES OF OUR ACTIONS

But these are teenagers. They’re not going to think about the future. There’s no point in doing that if you’re going to live forever. You can always think about the future later. Like when you’re a hundred. If teenagers thought about the future, they wouldn’t jump into a glowing cave at the drop of a hat, or play football in the path of an airplane, or, as Andrew later does, shove an annoying driver off the road in his SUV, directly into a river. And the reasons they can do that is:

They’re bigger than they used to be, they can do things they couldn’t do as kids, but they’re basically the equivalent of handing someone the keys to a big truck and telling him to learn on the job. He’s going to keep tearing up the clutch and sideswiping car mirrors.

In fact, the best thing, when you’re learning to drive, is to have a licensed driver in the passenger seat, mumbling prayers and stepping on an invisible brake. They need:

All the successful teenage heroes have some kind of positive parental influence: Robin has Batman, Spider-Man has Uncle Ben, the X-Men have X. Whether or not Matt and Steve have anyone is unclear, but Andrew definitely doesn’t have ANY positive role models. His mother is dying, and his father is an abusive alcoholic. So when he gets annoyed at a crazy driver, he tries to blow out the SUV, but instead sends it careening off the road and almost gets the guy killed. That’s some life experience right there.

And that forces Matt and Steve to come up with:

Don’t use your powers in public, don’t use them against living things, don’t use them when you’re mad. When you’re an adult, you realize that there are more important things in life than getting a pair of scissors from point A to point B in a hurry. You need rules.

But Andrew doesn’t react well to the rules. Teens tend not to. A big part of being a teenager is testing, bending and breaking the rules. Especially the one about acting on emotions and cravings. I teach in a high school, and sometimes the kids eat in class.

“You’re not supposed to be eating,” I tell them. “There are rules.”

Well, by all means. The rule is actually, “No eating in class UNLESS YOU’RE HUNGRY.” That sounds like a believable clause they would put in, considering teenagers are always hungry.

Sure, Andrew rationalizes it in his head. “I’m more powerful than everyone else,” he says. “Does a lion feel remorse over killing a gazelle?” But what makes you superior is not what you can do, it’s the rules you set for yourself. Your bible, if you will. And it’s Andrew’s inability to follow the rules that causes him to act on his emotions, rob a gas station, deflect a bullet without considering the consequences, and end up in the hospital.

Eventually, Andrew does become a villain. He is not all evil, and the movie does a good job of explaining why he would do what he does. But once he goes there, he starts lashing out at everyone – even people he has nothing against personally. He’s not really a supervillain, he’s a cranky teenager.

But he doesn’t get there all at once. It’s a series of steps -- letting his emotions control him, acting without considering the consequences, breaking the rules, hurting people by accident, his mother’s condition, his botched robbery, his injuries, his father’s abuse, his mother’s death. It’s not like flicking a switch from good to evil. There are a million shades of grey in between.

The truth is that most of the world is grey. But kids see the world in terms of black and white. There’s good guys and bad guys. There are no charitable businessmen who used underhanded tactics to get there, and there are no pickpockets who are just trying to feed their families. There are no shades of grey. When you tell your kids, “You can have this back when you learn to stop hitting people with it,” they hear, “You can’t have this back.” My son doesn’t understand why he can’t have a playdate after his bedtime on a school night with a kid who’s in his class all the livelong day. If playdates are okay, why not now? If I want something, why not buy it? If I can’t talk to strangers, why can you?

Growing up is not just about getting powers and abilities you didn’t have as a kid. That’s step one. Step two is figuring out what to do with those powers. A kid figures, “When I grow up, I’m going to eat candy ALL THE TIME.” An adult realizes that maybe there are reasons not to. There are pros and cons. Growing up is not a light switch that you flick, it’s a series of little steps. A bar mitzvah is just the first step

Becoming an adult means realizing that most of the world is shades of grey. And the first shade of grey is being a teenager.

Star Trek and God
Near Death Experience Panel
The Western Wall: The Heart of the World
Ask the Right Question: Tisha B’Av
Comments
MOST POPULAR IN Jewlarious
Our privacy policy
Aish.com Is Looking for Great Writers