Mossad and Morality on Film 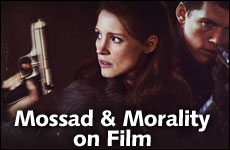 The Debt reveals more about the filmmaker’s own feelings of inner guilt than anything else.

Most films conform to conventions that reflect the attitudes of their filmmakers, and films about the Mossad, or Israel Secret Intelligence Service (its current name), are no different. Hollywood's latest Mossad movie—The Debt, featuring a star-studded cast including Helen Mirren—is a well-acted exploration of Israeli intelligence failures, moral ambiguities, and, of course, Jewish guilt.

The Debt is an exploration of Israeli intelligence failures, moral ambiguities, and, of course, Jewish guilt.

The story of The Debt begins in East Berlin in 1965. Three Mossad agents—David, Stefan, and Rachel—are closing in on a Nazi war criminal, a gynecologist with a particularly loathsome past. The team's mission is to capture him and transport him to Israel for trial. To entrap him, Rachel becomes one of his patients.

The three Mossad agents become famous for capturing the doctor, and thirty years after the event, Rachel's daughter writes a book about their triumph. But the book's publication threatens to reveal the fact that there was no triumph in East Berlin: Instead, the mission went violently awry. It falls to Rachel to try to repair the damage.

Intelligence operatives tend to appear in American popular culture as a limited number of types. Most popular are the amoral supermen ruthlessly dedicated to their craft (with perhaps a touch of redeeming irony, like James Bond) or lost souls who are radically alienated from their previous lives and grasping for a moral center, like Jason Bourne. There are also more human spy types—working-class stiffs, like Harry Palmer of The IPCRESS File, or the terminally world-weary, like Alec Leamas in The Spy Who Came In From the Cold.

As for the spymasters, they are cynical and amoral—if occasionally brilliant and charming, like George Smiley in Tinker, Tailor, Soldier, Spy. They are pictured as implementing either perverse government policies or their own rogue operations. Regret and failure are common enough; but, with few exceptions, emotional depth is not a hallmark of the writing or acting in spy movies. And in serious films and literature, supermen are often fated to be brought down to earth.

Thus, film spies are frequently called upon to face Nazis or terrorists; and an occupational hazard of such pursuit is regression to the moral mean. The bad guys get humanized: Nazis are softened by age, and terrorists expound the justice of their actions. The hunters, meanwhile, become brutalized, forced to face the effects of revenge and violence on their souls. Moral parity or even moral inversion can result.

Israeli agents on American screens present more extreme pictures of the general types and dilemmas. Some Israeli operatives are two-dimensional super-warriors. Tough Israeli bodyguards abound. On NCIS, the improbable ex-Mossad agent Ziva David—whose father, of course, is head of Mossad, and who has joined the U.S. Navy criminal investigation branch to liberate herself from her past—is a one-woman army, full of secrets. She is the most positive recurring Israeli character on American television. And then there is Adam Sandler. There have been multiple movies about the heroic Israeli raid on Entebbe, but the real-life commandos pale before the comic apotheosis of the Israeli hero in Sandler's You Don't Mess with the Zohan.

On the other hand, Israeli agents who are portrayed as less than heroic experience not only failure or regret but extreme inner conflict. This treatment holds true whether the author or filmmaker is Israeli or American. Israeli authors, notably Amos Oz and David Grossman, also regularly engage in the torment of their protagonists, many of whom are in or on the verge of flight from the world or from themselves. Unmitigated success—much less happiness—is never an option for Israelis in serious film or literature; the life-and-death predicaments and secrets of spies are perfect for dramatizing such a perspective. (One would never know from Israeli films and literature that opinion polls, for whatever they are worth, consistently show Israelis as among the happiest people on earth.)

The 2004 Israeli film Walk on Water is an example of this genre. The protagonist, an Israeli agent fighting inner demons, succumbs to compassion and fails in his mission against an elderly Nazi war criminal. It is, finally, the Nazi's grandson who faces his grandfather's evil and acts to end it. In 2005, Steven Spielberg's Munich created the archetypal tormented Israeli agent: Avner, leader of a team tasked with killing the Palestinian terrorists responsible for the 1972 massacre of members of the Israeli Olympic team in that city. As the team experiences failures, Avner is overcome by suspicions and doubts and ultimately abandons life in Israel. The inner and outer collateral damage of revenge becomes the main thrust of the plot.

The Debt, like the 2007 Israeli film on which it is based, explores the failures and inner conflicts of Israeli intelligence operatives. The Nazi in the film is appropriately evil, a fitting target for punishment. But the focus is on the Israeli agents and the price they pay. Their mission and secrets corrode their souls. Justice is ultimately done in The Debt, but the insidious deceit spanning 30 years is punished as well.

The film also raises more radical issues of moral inversion. The Nazi doctor in The Debt taunts his captors with statements about the passivity of Jews going to their death in the camps—echoing George Steiner's 1976 novel The Portage to San Cristobal of A.H., in which Hitler himself argues that Nazism and the Holocaust were the fruit of the Jews and their God. Is such moral inversion a goal of The Debt? Probably not. Is the question meaningfully raised by the film? Almost certainly not. Is it an unthinking provocation thrown out by the filmmakers against the viewers and the past? Or a mere device in the service of filmic drama?

Viewers of The Debt are left with troubling questions. But it is difficult to escape the conclusion that in this movie, as in other movies about Israel made for Western audiences, these questions are based on the filmmakers' assumptions—assumptions about the existence of a Jewish guilt complex, the pervasiveness of secrets undermining the legitimacy of the protagonists' larger intentions, and the common cinematic belief that guilty consciences lead to redemption, or at least enlightenment.

Alex Joffe is a research scholar with the Institute for Jewish and Community Research.

The Passion: A Historical Perspective
For Every Individual, A Torah Scroll
Allegiance To The Monarch
Meet the Real You: Yom Kippur
Comments
MOST POPULAR IN Jewlarious
Our privacy policy
Aish.com Is Looking for Great Writers