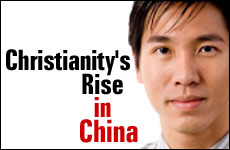 China realizes what the West is rapidly forgetting: a civilization is as strong as its faith.

Towards the end of his recent book, Civilization, the historian Niall Ferguson drops into his analysis an explosive depth-charge. He quotes a member of the Chinese Academy of Social Sciences, part of a team tasked with the challenge of discovering why it was that Europe, having lagged behind China until the 17th century, overtook it, rising to prominence and dominance.

At first, he said, we thought it was your guns. You had better weapons than we did. Then we delved deeper and thought it was your political system. Then we searched deeper still, and concluded that it was your economic system. But for the past 20 years we have realised that it was in fact your religion, Christianity. It was the Christian foundation of social and cultural life in Europe that made possible the emergence first of capitalism, then of democratic politics.

Equally arrestingly, Ferguson repeats the point made by the editor and Washington correspondent of The Economist, John Micklethwait and Adrian Wooldridge, two years ago in their book God is Back. While Christianity is in decline in Britain and most of Europe, it is growing and thriving in China, where the number of people in church on Sunday is greater than the total membership of the Communist Party, in the land that in 1958 Chairman Mao had declared “religion free”. The people flocking to the churches are not, as Karl Marx would have predicted, the poor and oppressed searching for the opium of the people. They are the young, hard-working, upwardly-mobile entrepreneurs for whom Christianity offers an ethical framework, a structured view of life and its disciplines, in a society experiencing rapid transition.

As a non-Christian, I find this fascinating. Europe is losing the very thing that once made it great, while China, the world's fastest-growing economy, is discovering it. China: the home of Confucianism, Taoism and its own brand of communism. That is something no one could have foreseen.

What has China realized that the West is rapidly forgetting? That a civilization is as strong as its faith. As a culture grows old and tired, as people borrow more and save less, as they value present pleasures over future growth, so they begin to lose the beliefs and practices that made their society successful in the first place.

“In the end a society and its religion tend to fall together, like body and soul, in a harmonious death.” – Will Durant.

It begins to resemble the Roman Empire at the start of its decline. The Roman historian Livy wrote, with great poignancy, about how “with the gradual relaxation of discipline, morals first subsided, as it were, then sank lower and lower, and finally began the downward plunge which has brought us to our present time, when we can endure neither our vices nor their cure.”

A half-century ago, Will Durant in The Story of Civilization, argued that the decline of a civilization was the culmination of strife between religion and secular intellectualism, which ended by weakening the institutions of convention and morality. “In the end a society and its religion tend to fall together, like body and soul, in a harmonious death.” The decline and fall of civilizations has been charted by the wise for many centuries. They include the sages of ancient Egypt, the prophets of ancient Israel, the great 14th century Islamic thinker Ibn Khaldun, and the farseeing 18th-century Italian philosopher and historian Giambattista Vico.

They all offer essentially the same analysis. Civilizations begin by valuing austerity, courage and self-sacrifice. This sets them on a path to growth. As they become successful, they grow more self indulgent and self centered. People are no longer willing to make sacrifices for the group. Trust declines. Social capital wanes. There are no heroes any more. Renown gives way to fame and then to mere celebrity. That, Niall Ferguson implies, is the precipice we are approaching in the West.

Societies start growing old when they lose faith in the transcendent. They then lose faith in an objective moral order and end by losing faith in themselves. But there is an alternative. The West can rediscover what Jeremiah called “the devotion of your youth.”

Judaism and Christianity share an astonishing capacity for self renewal. That is what happened in Judaism after every tragedy from the Babylonian exile to the Holocaust. That is what is happening now to Christianity in many parts of the world, and it can happen here too.

We are as strong as our faith. That truth, once the West’s unique selling proposition, now comes with a label saying, “Made in China.” But it’s still worth buying.

Raising My Daughter with Autism

Oh That Fifty Feeling
What Makes Eli Run?
The Tyranny of Materialism
Science Enters the Mysterious Inner World of Consciousness
Comments
MOST POPULAR IN Current Issues
Our privacy policy