The Alarming Rise of White Supremacy in America 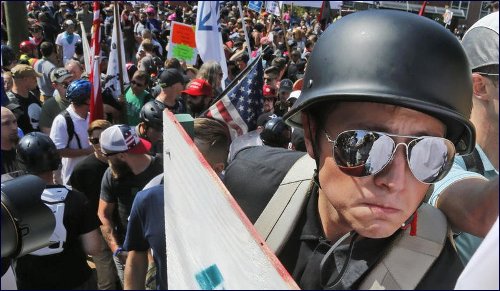 The violence in Charlottesville didn’t originate in a vacuum.

Are American Jews controlling and manipulating non-white people in order to bring about the extinction of white America? The very question is ludicrous, yet for a growing number of Americans the answer to this offensive inquiry is – shockingly – a resounding yes.

Long noted by law enforcement officials, the rise of disparate groups of American neo-Nazis, white supremacists, white nationalists and other racist and anti-Semitic groups burst into public consciousness during the recent “Unite the Right” rally in Charlottesville, Virginia. Opposed to all minority groups in the US, these various haters seem to reserve special ire for Jews.

Thus, on Friday night, August 11, 2017, as Jews around the country were celebrating Shabbat, the University of Virginia witnessed a scene that could have come straight out of a 19th century pogrom. A motley group of neo-Nazis and white supremacists marched through the university’s campus waving torches and chanting “Jews will not replace us” and “blood and soil” (an English translation of the Nazi-era slogan “blut and boden”). Marchers carried banners with swastikas; one sign declared “Jews are Satan’s children”.

James Fields Jr., who rammed his car into a crowd of counter-protesters in Charlottesville, killing Heather Heyer and injuring many, has been involved with a neo-Nazi group called Vanguard America. Its goal is to fight “the international Jew”. The month before the Charlottesville rally, this abhorrent group said, “Those behind the subversive elements eroding our culture often have something in common. Jewish influence is prevalent, invasive, dangerous.” Jason Kessler, who organized the Charlottesville rally, has opined that Jews escaped Nazi Germany in order to “erode Western values”.

According to the FBI, Jews are the number one target of religious hate crimes in the United States.

Even after the carnage in Charlottesville, far-right extremist groups are feeling newly emboldened. “We achieved all of our objectives” in Charlottesville, explained Matthew Heimbach, a founder of the neo-Nazi group Nationalist Front which tries to be an umbrella organization for far-right hate groups. “We showed that our movement is not just online, but growing physically. We asserted ourselves as the voice of white America. We had zero vehicles damaged, all our people accounted for, and moved a large amount of men and materials in and out of the area. I think we did an incredibly impressive job.”

Richard Spencer, the “Alt-Right” leader and one of the organizers of the rally, echoed his words: “We’re going to be back here and we’re going to humiliate all of these people who opposed us...We’ll be back here 100 times if necessary. I always win.”

Faced with this hatred and virulent anti-Semitism, what can ordinary citizens do? Here are four suggestions to help resist the increasing onslaught of extremist hate.

12 Business Lessons from the Book of Genesis