A Chinese girl forced me to confront what it means to be Jewish.

“What are we waiting for?" my Chinese girlfriend asked, somewhat confused, as we sat facing each other in the privacy of my apartment. For weeks we’d been talking about the prospect of getting married.

I held back. I was not supposed to marry a Gentile, I thought. It would be a betrayal of my family, my ancestors, my tradition. Yet it would sound racist if I told her that.

Then I realized: It would sound racist to me as well.

I was raised with a lox-and-bagels Judaism, replete with misconceptions and negative stereotypes about the religious life. The few laws that we kept – such as not eating pork – we did because of habit or tradition.

Confronted with an ancient, fascinating Chinese tradition, I was challenged to identify with my Jewishness.

Like many of my peers, I had an affinity for Jewish culture, and that’s where it ended. And like many young Jews, I became interested in philosophy and spirituality. In college I studied Marxism, Platonism, socialism, humanism, feminism. I wanted to know if any of them was the key to fixing the world. I delved into the teachings of Christianity and Buddhism. I travelled to the arctic for a month hoping to taste native spirituality.

In the process, I became disillusioned with one “ism” after another. And Judaism is an “ism” that was never even on my radar.

Until I met Belinda.

At first it was exotic and exciting: I was expanding my horizons. But soon the guilt and the doubts started pouring in. Were any of the Buddhist practices idol worship? Did it matter whether our future children ate pork and shrimp? Or was my discomfort with these issues the result of years of conditioning and guilt induced by my parents, synagogue and community? Whatever the case, I couldn’t just snap my fingers and make my upbringing disappear.

And not only that: As I was confronted with an ancient, rich and fascinating Chinese tradition that I knew nothing about, I was challenged to identify what was unique and special about my Jewishness.

When you’re forced to explain and justify your Jewish beliefs, values or practices to a foreign audience, something interesting happens: the conversations become very stimulating. My Chinese girlfriend would ask me questions about Judaism and I’d run and dig up answers – and not just any answers, they had to be the most satisfying answers possible, so that she’d find Judaism appealing. In the process of sharing my heritage with her, I discovered more and more of its treasures. In the space of four years, from not having a mezuzah at my front door, I became a kippah-clad, Shabbat observant, tefillin-donning Jew. Go figure.

Meanwhile, Belinda herself became increasingly drawn to Jewish values and beliefs – while also investigating other religions – and came to see the divine nature of Torah. Since Gentiles are not required to be Jewish to merit a portion in the afterlife, her decision to embrace Judaism came only after months of introspection, further learning, and immersion in Jewish life. Once she converted, I didn’t wait long before proposing to her at a kosher Chinese restaurant!

But it doesn’t always work that way. Interdating more often than not leads to intermarriage, non-Jewish children and further disaffection from our heritage. In my case, the opposite happened. What accounts for the difference?

Most non-religious Jews who date only other Jews do so because of family and community expectations. Or because of the Holocaust. Or because of antisemitism. But these reasons are rather tenuous, tainted with guilt. Many cultures exert pressure to marry one’s one kind, but why give in to it –especially in a multicultural society?

Falling in love can override all these considerations. And here, I think, is the key. It all boils down to the bifurcation of Judaism into those who abide by it as a religion (and by religion I mean an all encompassing sacred and meaningful way of life, something one believes is actually real and true) and those who identify with it as a culture.

The recent Pew study on the state of Judaism in America asked respondents to identify what is essential to their Jewish identity. 14% replied “eating traditional Jewish foods” and 42% replied, “having a good sense of humour.” If that’s what Judaism is to them, there is not much to be lost in marrying a Gentile. In the same vein, Belinda and I realized that culturally we could take the best of both worlds. We can celebrate Rosh Hashanah and we can celebrate Chinese New Year. We can eat matzah ball soup one day and won-ton another. We can exchange Jackie Mason jokes and dabble in the wisdom of Confucius. We’d both be enriched. 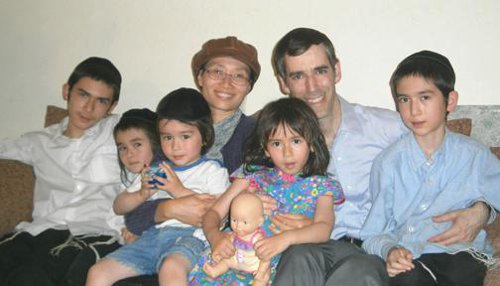 To curb intermarriage, we need young Jews to identify with a Judaism that is relevant and meaningful.

But if Judaism is more than just a tradition, it is built on the revelation at Sinai when God gave the Jewish people His Torah, the Divine instruction manual for living, then the ramifications are vastly different. It’s not something I can blithely ignore. They’re commandments; not suggestions. And included in the Torah is the prohibition against intermarriage.

So if we want to curb intermarriage, we need to get young Jews to identify with Judaism as a religion that is relevant and meaningful, rather than simply as a culture.

Discovering the Relevance of Judaism

I believe interdating is a symptom of a problem, namely, Jewish ignorance. My interdating journey forced me to dive into learning anew, unlearn what I believed Jewish religion was, and relearn it with depth and authenticity that fundamentally changed my identity as a Jew.

I believe a big part of Jewish education today must consist of unlearning what we assume Judaism is all about. Is Judaism about refraining from eating pork because of habit or tradition, or is it about observing the kosher laws because that’s one of God’s ways of ensuring we remain a holy nation? Is Judaism about cultivating a sense of humor, or is it about cultivating a relationship with the Creator?

In short, we need to distinguish between authentic Torah Judaism and its myriad cultural echos.

Only then can we appreciate what it truly means to be Jewish.

Her Final Hours of Life, A Deathbed Miracle

Pain is a Reality; Suffering is a Choice

A Gold Medal for Integrity
The 21st President of the United States: Failure or Inspiration?
Hiding Their Jewishness
The Jewish Pope: Following the Questions Home
Comments