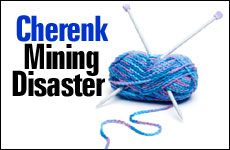 Chileans weren’t the first miners trapped underground for days. We Jews have been there too.

JEWLARIOUS SATIRE: The rescued Chilean miners story has captured the hearts and spirits of people the world over. Chile, in conjunction with those nations that aided it in the rescue, is to be congratulated for the happy ending to this potentially deadly occurrence. Sadly, however, trapped miner stories have been part of Jewish history as well. The best known, of course, was the Cherenk mining disaster of 1914 -- inspiration for the hit Klezmer song, “Ballad of the Cherenk Mining Tsuris.”

Cherenk was a Jewish shtetl or village in the westernmost part of the Ukraine. It was home to the >Kostyukhnivka> gold mine, which collapsed on November 3, 1914, leaving 14 Jewish miners trapped 1,700 feet deep below ground and two miles from the mine entrance. The mine had a history of instability, as did many of its miners.

Cherenk had a long tradition in mining, and made the shtetl one of the world's top suppliers of gold and miners’ training classes. In fact, it distributed matchbooks picturing a miner, with the offer, “If you can draw this gold miner, you could have a lucrative career in Cherenk’s exciting mining industry.”

The >Kostyukhnivka> gold mine itself was owned by the Plyskiv Mining Company, which had a poor safety record and suffered a series of mishaps including the deaths of several workers. To its credit, the company paid for all the funerals, chose each of the deceased as employee of the month, and gave all the widows gift certificates for a free tour of the mine. Still, between 1897 and 1914, the company received 217 fines for breaching safety regulations and for referring to black lung disease as “the sniffles.” Due to budget constraints, there was only one inspector for Cherenk’s 452 mines. Some suspected him of conflict of interest, though, as he was also an employee of the Plyskiv Mining Company and whenever anyone brought up the topic of conflict of interest, he broke out in a rash across his forehead which spelled out the word “GUILTY.”

When the collapse occurred, the National Emergencies Office of the Interior Ministry reported the names of the 14 trapped miners, including Aleksandreyeva Dombrowski, Fadeyushka Mihalovich, and Skippy Rosenblatt. There were two groups of miners. The first group was near the mine’s entrance and escaped immediately. The trapped group would not have resented the escapees so much had they not shouted “So long, suckers!” as they dashed out.  A dust cloud occurred during the collapse, blinding many miners for six hours and causing lingering eye irritation and burning. This delayed their planning a lawsuit, though they discussed it constantly and one of them even earned a law degree while he was down there.

The trapped group of miners tried to escape through a ventilation shaft system, but the men were too stout to fit through. This was due to their having been participants, for the past five years, in Cherenk’s popular Kugel-Eating Competition, for which they would train all year.

The shift supervisor of the trapped miners, Mendel Zvi, recognizing the difficulty of any rescue attempt, if a rescue was even possible, gathered his men in a secure room called a ">miner’s> succa" and told them not to count on being part of this year’s Kugel-Eating Competition. That’s when the gravity of the situation hit the miners. Rosenblatt started going stir-crazy and said maybe they could have their own kugel-eating competition inside the mine, but he was immediately slapped and told to get ahold of himself.

Meanwhile, newspapers kept the world informed about the mining disaster. People the world over were inspired by the miners' fortitude, camaraderie and desire to go on living despite the possibility of not being able to participate in the Kugel-Eating Competition. They were amazed by the engineering efforts being put forth to attempt to save the men's lives. And they were grateful for some uplifting news for a change.

From Russia to China to Australia and portions of North Dakota, people in seemingly every corner of the world followed the Cherenk miners' rescue attempts in the paper and many were touched by the experience. "It's a heartwarming story,” Meyer Feigelbaum said as he plucked a chicken in Minsk. His wife, Estelle, added: "Instead of those guys in the mine turning on each other, like the shmendriks in my family, they worked together, they bonded."

How did they finally get out? Leave it to a group of Jewish mothers whose love for their trapped miner sons motivated them to come up with the perfect, last-minute solution that enabled their boychicks to escape from the mine just before their air ran out. The women knitted a 1700-foot hemp ladder, which was lowered down the mine shaft. Not only did it enable all 14 Jewish miners to climb out, but Guinness World Book of Records certified it as the World’s Longest Ladder and the World’s Most Successful Jewish Miner Rescue Made Possible by Their Mothers. More good news – the Jewish mothers went on to establish a business manufacturing similar ladders for mining companies worldwide, as a security measure, just in case.

”Nothing compared to the terror of how we felt preparing for our bar mitzvahs.”

Some marveled at the miners' capacity to cope for so long and wondered how they could have dealt with the terror and uncertainty. One of them, Fadeyushka Mihalovich, agreed “there was plenty of terror and uncertainty, but we all decided it was nothing compared to how we felt preparing for our bar mitzvahs.” Only one of the miners, Faivush Hertsik, went mad from the stress, and ended up convinced he was a mouse. “We tried everything to help him,” revealed Mihalovich, “but when he got out, all he wanted to do was crawl into a hole in the wall and eat cheese.”

The obvious contrast is with America. With Hurricane Katrina, the Bush administration was completely incompetent and out to lunch on the human tragedy. With the BP oil spill, the Obama approach was to punt over responsibility to British Petroleum. The Cherenkians, in particular the Cherenkian Jewish mothers, showed us what leadership and crisis management is all about. Lives were at stake and the town snapped into action. Perhaps a Jewish mother should be the next U.S. President.

A special nod to the miners, who showed stunning resilience without even a thought or desire for personal gain or fame, though one secretly contacted a tefillin company to inquire about product endorsement opportunities.

Baby Boomer-angs
Can You Show Me This "God?"
How to Become Immortal
Judaism and Mental Health
Comments
MOST POPULAR IN Jewlarious
Our privacy policy
Aish.com Is Looking for Great Writers