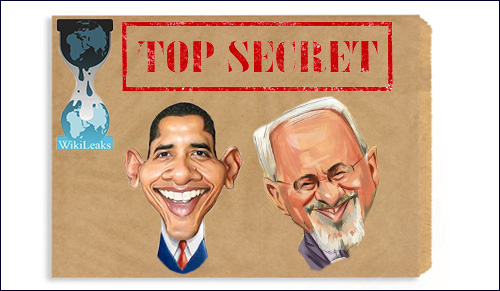 This week Iran and the so called P5+1 signed an historic – possibly “end-of-historic” – agreement to bring “safe” use of nuclear power to Iran…for six months… maybe. Each side brought a journalist of record to the summit, with the United States bringing Jewlarious, and Iran bringing our sister website Al-Jewlarious. We are releasing some selected excerpts from the negotiations at the risk of having to live in an airport in Russia the rest of our lives

Kerry: Explain one thing to me Mohammad, why does a country with the world’s second highest petroleum reserves need a nuclear energy program when nuclear energy is more costly, more dangerous and far more complicated to deliver?

Zarif: Uh…well, we are doing it for our children.

Rouhani: Let me get this straight – we get $6 billion and keep our nuclear program intact?

Kerry: For your children? I don’t understand.

Zarif: I believe… the children are our future. Teach them well and let them lead the way.

Kerry: Mohammad, are you just quoting a Whitney Houston song?

Zarif: Show them all the beauty they possess inside. Give them a sense of pride…

Zarif: …to make it easier.

Obama: So, we are down to the final details. You are not going to back out, right?

Rouhani: So let me get this straight – we get $6 billion and we get to keep our nuclear program intact, right?

Obama: Yes. But, you are not going to make me look silly?

Rouhani: Once again, we get $6 billion – cash, like in a Swiss bank account or something – and we get to keep our nuclear program intact, right?

Obama: Yes, but only if you promise not to keep the money and then develop the nukes.

Rouhani: So, $6 billion and a “safe” nuclear program.

Obama: Why are you using air quotes around “safe”?

Rouhani: I am sorry – $6 billion and we run a safe program, no air quotes.

Obama: Yes, but, will you keep it safe? How will I know?

Obama: No, I did not quote Whitney Houston.

Rouhani: You kind of did.

Obama: Well, it was entirely coincidental. The odds are good that I will say “How will I know?” at some point – it can’t be considered a reference each time.

Rouhani: Fair enough. At times like these... “I get so emotional, baby.”

Obama: We are entering a new dawn?

Kerry: What did you just say?

Obama: Hello? Indeed, indeed. Thanks for calling, Mr. Chamberlain. Yes, we have achieved “peace in our

time” finally. Yes, your grandfather will be vindicated. Congrats. Yes, history has shown that the only way to stand up to a tyrant is to appease. Wonderful. Thanks for your call. Yes, we will be sending an edible arrangement to Kim Jung Un immediately. Our plan is to get some billions in his hands and pray for the best.

Zarif: Sergey, can my government rent some space from you in the Caucus Mountains for six months? We just need to stash a few centrifuges. Oops, did I say that? I meant...sufganiyot. You know, with Chanukah here and all, we need the extra doughnut storage space.

Lavrov: Yes. Yes – you can rent the space. No need to negotiate. Happy to help.

Zarif: So, we just send the…

Lavrov: Yes, just send it over. Why do you keep asking? What is your problem? Yes. We would be happy to store your weapons.

Lavrov: Stop playing these silly games. We will take your weapons and store them, for free. Period.

Zarif: So after we conclude the nuclear deal can we get to work on an agreement to permit the safe use of chemical weapons?

Fabius: Mr. Kerry, can we talk about that for a second outside?

Kerry: What’s to talk about? We can use the same framework as the nuclear deal. Peace in our time.

Fabius: John, you realize that makes no sense right? Chemical weapons by definition can’t be safe.

Zarif: That’s not true. They could be used in household cleaning products…or insect repellant.

Kerry: You see Laurent, the Iranians just want to manufacture some Raid. It makes perfect sense.

Kerry: So Mohammad, about that plutonium reactor in Arak, you know you’re going to have to close that.

Zarif: But the reactor at Arak is a fundamental part of our nuclear weapons…I mean peaceful nuclear program.

Kerry: It has to go Mohammad. There are no peaceful uses for plutonium. It is only used for nuclear weapons.

Zarif: But it’s an inalienable part of the Iranian people’s self determination. I don’t see how…

Kerry: I am joking.

Kerry: I am totally joking. You should have seen your face!

You were all like, “but the Iranian People’s self determination”…

Zarif: John, you almost gave me a heart attack

Kerry: Oh the look on your face was priceless.

Rouhani: Listen, I have said a few things over the years and I wanted to apologize.

Obama: We all say things we shouldn’t. I told people they could keep their healthcare.

Rouhani: I really appreciate that. I knew you would understand.

Obama: So, what did you say?

Rouhani: Oh, you know… all that “Great Satan” stuff.

Obama: Why? Why would you say that?

Rouhani: I saw Argo and was just thinking that if there is an Argo II after this nuclear deal, I wanted there to be good actual footage of me screaming something crazy. Call it my audition tape for Ben Affleck.

Obama: So, you didn’t mean it. We are not the Great Satan?

Rouhani: Let’s not get into a “he said, she said.”

Obama: There is no “she said.” Who is the “she” here? You said that you said it. Did you in fact or did you not?

Rouhani: Well, yes, but it was in reference to Israel – “The Great (Zionist) Satan” – not you.

Obama: Wow, that is a relief. OK, then let’s sign this baby!

Medical Myths
In the Shadow of David and Goliath
Where Do the Laws of Nature Come From?
Saadiah Gaon, Rashi and Maimonides: How Three Rabbis Revolutionized Judaism
Comments