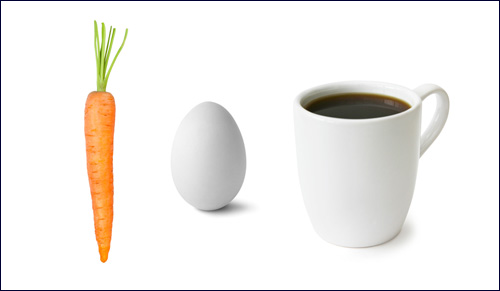 When adversity knocks on your door, how do you respond?

A young man went to his mentor for advice. His life was hard and he couldn’t take it anymore. He wanted to give up. He was tired of fighting and struggling. It seemed as one problem was solved, a new one arose.

The mentor took him into the kitchen. He filled three pots with water and placed each on a high fire. Soon the pots came to boil. In the first pot, he placed carrots, in the second he placed eggs, and in the last he placed ground coffee beans. He let them sit and boil, without saying a word.

"Carrots, eggs, and coffee," he replied.

The young man was perplexed. "What does it mean?"

The mentor explained: “Each of these objects had faced the same adversity – boiling water. Each reacted differently. The carrot went in strong, hard, and unrelenting. However, after being subjected to the boiling water, it softened and became weak. The egg had been fragile. Its thin outer shell had protected its liquid interior, but after sitting through the boiling water, its inside became hardened. The ground coffee beans were unique, however. After they were in the boiling water, they had changed the water.”

"Which are you?" he asked the young man. "When adversity knocks on your door, how do you respond? Are you a carrot, an egg or a coffee bean?"

Are we the carrot that seems strong, but with pain and adversity do we wilt and become soft and lose our strength?

Are we the egg that starts with a malleable heart, but changes with the heat? Do we have a fluid spirit, but after a death, a breakup, a financial hardship or some other trial, become hardened and stiff? Do our shells look the same, but on the inside, we are bitter and tough with a stiff spirit and hardened heart?

The happiest of people don't necessarily have the best of everything. They just make the most of what comes along their way.

Or are we like the coffee bean? The bean actually changes the hot water, the very circumstance that brings the pain. When the water gets hot, it releases the fragrance and flavor. If we are the bean, when things are at their worst, you get better and change the situation around you.

When it comes to adversity, are we the carrot, an egg or a coffee bean?

The happiest of people don't necessarily have the best of everything. They just make the most of what comes along their way. The brightest future will always be based on growing from your past. We can’t become the people we are destined to be unless, we learn from and let go of our past failures and heartaches. The key to greatness is the ability to learn, grow and move on. To focus on what lies ahead, the person we know we can be, and work until that dream becomes a reality.

Mr. Charlie Harary, Esq. is a prolific speaker who has traveled all over the country and abroad speaking for organizations, schools, universities and institutions on a variety of topics and to audiences of various sizes and affiliations. He has created dozens of videos that have received worldwide attention reaching hundreds of thousands of people in over 15 countries. Mr. Harary is the CEO of H3 Capital LLC, a private equity company based in New York. Prior to H3 Capital, Mr. Harary was the First Vice President of Residential Operations and Legal Counsel of RXR Realty, a multi-billion dollar Real Estate Company based in New York. Prior to RXR, Mr. Harary was an associate in Paul, Weiss, Rifkind, Wharton & Garrison and Davis Polk & Wardwell. He received his J.D. from Columbia Law School where he was awarded the James Kent Scholar and the Harlan Fiske Stone Scholar. Mr. Harary is an Associate Professor of Management and Entrepreneurship at the Syms School of Business in Yeshiva University. He is also a Senior Lecturer for the Orthodox Union, Aish Hatorah and NCSY. In addition, he is an active community leader. He is the founder and president of Milvado Inc., an organization that develops innovative methods to teach spirituality in relevant and modern ways. He is a member of the Executive Board of the OU as well as the Founding Chairman of its Young Leadership Cabinet. He is also a member of the Conference of Young Jewish Presidents.