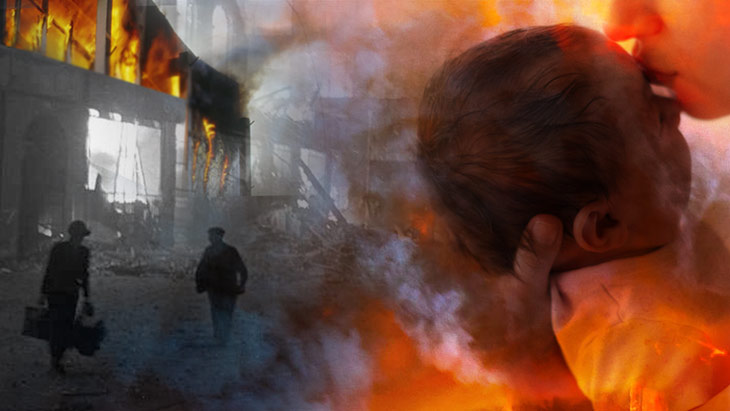 My German birth certificate is a testament to life, humanity, and to the spirit and courage of my dear parents.

Several years ago, I donated my birth certificate to the archives of the United States Holocaust Museum in Washington, DC. It is there to confirm my birth on January 19, 1943, in Berlin, Germany. It is a permanent record to rebut present and future revisionist distortions of Jewish life during the Holocaust. Moreover, it is an official Nazi governmental record of my emergence into the German inferno, as well as my parents and my miraculous survival. 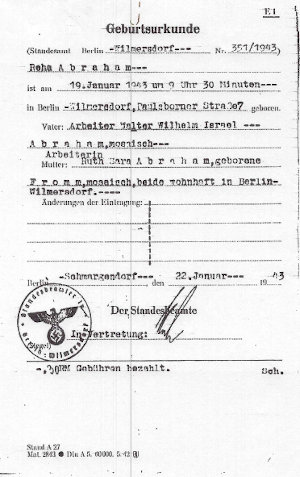 My parents lived at Paulsborner Strasser 7, Wilmersdorf, Berlin. They became forced laborers for the Germans, the last step prior to transport to a concentration camp and death. My mother worked for a pharmaceutical factory, and my father was assigned work whenever and wherever he was most needed. My mother and father left their apartment in the morning, not knowing if they would ever see each other again at the end of the day as Jews in Berlin were disappearing day by day.

During this time my mother had a very strong desire to have a child. My birth was not accidental; the only explanation I have is that my mother embraced spiritual resistance as our ancestors in Egypt did during the period of Moses and Pharaoh. This strong craving for a child must have been in my mother’s DNA. Even though we were slaves doing back-breaking labor, under horrendous conditions, and despite Pharaoh’s proclamation to throw all first-born male infants into the sea, we multiplied and survived.

Did my mother’s pregnancy put my parents in mortal danger? Yes, but no more than before, as their lives were already suspended in constant dread and peril. Disappearance of relatives and friends, along with inhuman and malevolent restrictions for Jews only added to the precariousness of their lives. Nevertheless, my mother had a deep reservoir of faith and felt that the child within her might make a difference and alter their destiny. My father, however, being pragmatic was deeply distressed and not that optimistic about our future. 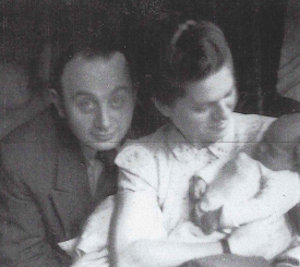 My parents holding me days after my birth

So, on a bitter cold winter morning, during a brief pause of the allied bombing of Berlin, I was born. There was no hospital for me. Only my parents’ apartment would be safe for my birth. No obstetrician, just Dr. Heller, a Jewish general practitioner was fortunately available. He had managed to reach my mother even though the streets of Berlin were burning after the last allied air raid. There was no layette, crib, nor toys for me. My two cousins, Helga, 15, and Johnny, 12, scrounged around the streets and garbage cans of Berlin looking for scraps of material to sew for clothing and anything else my mother could use. They found an abandoned carriage among the bombed ruins and it did the job. It had a slight tilt to it, and as it moved, its metal wheels screeched sharply on the street. I still have the picture of this carriage. There was little food and aside from my mother’s milk, my diet consisted of pigeons my parents somehow managed to acquire. When necessary, some wine was found and used to keep me calm and quiet when needed. 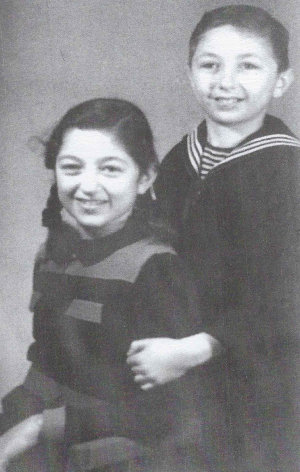 Helga and Johnny, killed in Auschwitz, in 1943 along with their parents, Ella and Martin Kessler

In anticipation of my birth, my parents had set two goals for themselves. The first took place when three days after my birth, my father walked into German police headquarters to have a birth certificate issued for me. My parents were in a quandary; should they inform the police that another Jewish child was born? I believe they made the right decision, no matter what the outcome might have been. The police gave my father a list of Jewish names, and the name Reha, was among them. To this day, it is incomprehensible to me how my father succeeded in obtaining this certificate. This ordinary document could have cost us our lives. Preparing for the worst, my parents thought if I were to be found alive with my birth certificate secured on my clothes and orphaned, I would be identified as a Jewish child.

The second goal, which was to hide from the Nazis, came into play. My parents, with their false identities, removed the yellow stars from their clothing, and in the middle of a freezing cold night, on January 22nd, boarded a train to the countryside of Berlin where a hiding place had been arranged for us.

My parents, always fearful of being discovered, and I were hiding in various places for over 18 months. While living at a remote farm house, we were betrayed by neighbors and had to flee. Fortunately, we were able to escape and find other places of refuge.

We could not have survived without the help of a stranger, Maria Nickel, a German housewife with two children. She endangered herself and her family by providing us with identity papers, food and refuge. Many times, she passed me off as her child. More than once, she took me to a hospital when I was ill, and kept me with her when my parents had to sleep in phone booths and parks. Maria is recognized by Yad Vashem as one of the Righteous Among the Nations.

My family’s relationship with Maria was eternal, from the day she first approached my mother to her death. She and her family became part of mine. We celebrated joyous occasions together and were there for loss and sadness as well. We travelled to Berlin to celebrate her 90th birthday. When asked by a journalist, why she endangered herself and family for Jewish people she did not know, she responded, “How could I not?”

We were liberated by the Russians in 1945. We emigrated to the United States in 1948. My German birth certificate rests where it can be seen and studied for generations to come, as it is a testament to life, humanity, and to the spirit and courage of my dear parents.

Reha Sokolow is the author of Defying the Tides.

Searching for Jews Saved by the Angel of Budapest
The Promise Of The Land
Which Chat Are You On?: Parshas Behar/Lag Ba’Omer
Do You Like Slow-Cooked Food? Thank the Jews
Comments
MOST POPULAR IN Jewish Society
Our privacy policy