Because I Said I Would 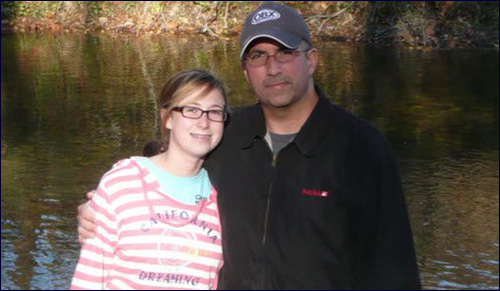 The power of a promise.

His oncologist looked him in the eye and answered. "It means you are going to die of this."

Garth Callaghan was diagnosed with prostate cancer in November 2011. Since then he has also developed kidney cancer. Statistics say he has an 8% chance of living past five years.

Ever since Garth's daughter, Emma, was in second grade, he has been making her lunches and writing a special note for her each day.

At first the notes were easy phrases and little pictures that she could understand. But as she grew, Garth began to use the notes as a way to really encourage and connect with his daughter.

After Garth's cancer diagnosis, the notes began to take on a new meaning. One day after a painful surgery, Callaghan came home to find his daughter ripping up one of his napkins. At first he thought that he had written something wrong, but then he realized that his daughter Emma was ripping off the quote to save in her notebook. Since then, she has been saving all of her father's notes.

Garth with his daughter Emma

And that is when Garth decided that he would write 826 lunch notes in advance so that Emma will have one for every day of school until she graduates from high school. He doesn't know how much time he has left, but he is determined to finish these lunch bag legacies so that his daughter will always know how much he loves her.

Some of the beautiful napkin notes:

"Stand up for people and you will change the world."

"Joy is portable, bring it with you."

"I'm thinking of you today." 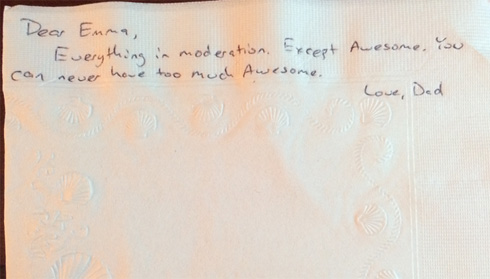 But it's not just the content of these notes that is inspiring. It's also this father's unwavering commitment to fulfill his promise. Garth said that he was inspired by the website "Because I Said I Would" which is a non- profit organization founded by Alex Sheen. Alex mails blank 'promise' cards to people all over the world. And people write out promises to themselves or to others. The bottom right corner of each card says "because I said I would." 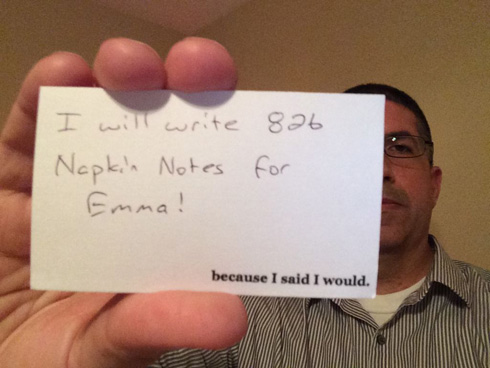 Psychology studies on change reveal that those who write down their goals are twice as likely to reach them. That is how over a hundred thousand people are changing their lives. That is how Garth is writing 826 lunch notes. That is how a four year old who posted her note is learning how to sleep in her own room. That is how a smoker is quitting. That is how a man stuck in a dead end job worked up the courage to finally leave.

But there is something else that is being tapped into by the promise cards. They are like a mirror to the amazing willpower that God has granted to each of us. There is a deep desire within every person to stand behind his own words. And there is a yearning within all of us to be able to make an authentic commitment and then show up, no matter what.

The cards remind us of the power of promise that often lies dormant within us. The power to make real, lasting changes in our own lives and in the lives of those around us. Sometimes all it takes is a note on a napkin every day to leave a lasting legacy. Sometimes it takes everything that we have within us to follow through. But once we do, we discover that showing up doesn't have to have a why. It only has to happen. Because I said I would.

8 Ways to Make Your Life Miserable

Developing Patience: The Foundation for All Relationships

Letting Go
Scientific Curiosity and the Divine Encounter
Mind Over Milkshakes
Love the Convert
Comments
MOST POPULAR IN Spirituality
Our privacy policy
Aish.com Is Looking for Great Writers