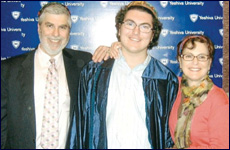 After the tragic death of their son, Mark and Ellen Newman are doing everything possible to ensure no other parents suffer what they have.

Maya Schulder, a 16-year-old from Arizona, in Israel with her congregational youth group, died of dehydration on a hike June 15. News reports stated that the group lacked adequate water.

As is usually the case with such tragedies and near tragedies – e.g., the death of a new IDF recruit on an army tour shortly after induction, an African-American university student who collapsed and died climbing Masada, yeshivas and seminaries being forced to call for emergency evacuation while hiking in oppressive heat – the news came in the form of an email from Mark Newman of Great Neck, New York.

My relationship with Mark and his wife Ellen began last June when Mark sent me an email out of the blue people relating how Mishpacha readers are always telling him that we look exactly alike. I attempted to mollify him by pointing out that almost all formerly black-haired men of a certain age look alike, and suggesting that he should not take it to heart.

That jocular beginning, however, soon took a darker turn. Mark mentioned that the attached photo of him was somewhat out of date and that he had subsequently put on ten pounds "since I'm not very happy right now."

"Not very happy" proved to be a considerable understatement. Mark and his wife Ellen's son and only child, Ariel Yitzchak, died nearly two years ago while on a hike in the Judaean desert, shortly after arriving in Israel for his gap year.

Ariel Yitzchak was born after years of waiting and prayer, and they knew from the start that he would likely be their only child. Ellen quit a job that she very much enjoyed to be a full-time Mom. For Mark, Ariel Yitzchak became not only his son but his best friend. After his passing, Mark could not function or return to his senior position with the IRS for four months. 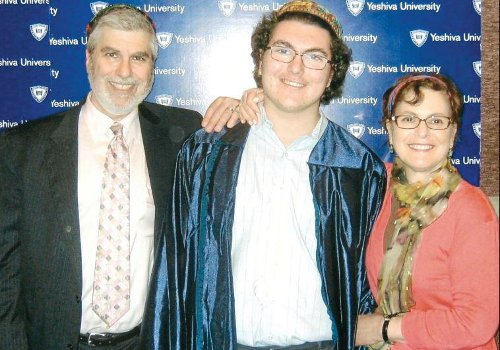 At the unveiling for Ariel Yitzchak, Mark did not spare the implications of his loss: "Without Ariel, there is no one ever again to call out to us "Mom" or "Abba." We will never have any grandchildren."

When Mark and Ellen first received a call from Hadassah Hospital that all was not well with Ariel, the first doctor they spoke to was a cardiologist. They assumed that Ariel must have had some undetected heart condition.

Only later did they learn that he died of exertional heat stroke (EHS). By the time, he was brought to the hospital by helicopter his internal temperature was over 109 degrees Fahrenheit. He had literally self-combusted.

What happened to Ariel was completely preventable – "not a tragedy," in Mark's words, "but an atrocity" caused by gross negligence.

Ellen immediately began reading everything available on exertional heat stroke. And she and Mark quickly realized that what happened to Ariel was completely preventable – "not a tragedy," in Mark's words, "but an atrocity" caused by gross negligence.

Every new death from exertional heat stroke or dehydration is a searing reminder for the Newman's of their loss – not that reminders are ever needed. In addition, it is a further spur to what has become their life mission – preventing future deaths like Ariel's.

Working together with Professor Yoram Epstein of the Sheba Medical Center and Dr. Douglas Casa of the University of Connecticut's Korey Stringer Institute, the Newmans have created Ariel's Checklist of ten points that every hiker and hike leader needs to know to prevent exertional EHS. (Korey Stringer was an all-pro NFL lineman, who collapsed and died, during training camp.)

Ariel's Checklist comes in a short form for hikers and a long-form for tour leaders and guides. Both are available here.

Some of the ten items on Ariel's Checklist seem obvious at first glance – e.g., ensure sufficient hydration and adequate rest stops, do not hike in the heat of the day – but even then readers might be shocked how much water and rest are required by inexperienced, frequently out-of-shape hikers, in high temperatures.

Nor is it enough for the hikers to be told to drink: Hikers themselves may not be aware that they are dehydrated until it is too late. In the majority of cases, EHS strikes without warning. The tour guide must personally see to it that hikers drink. And that means making sure that they have adequate water with them and that it is sufficiently cool to be drinkable.

Other items will be less familiar. For instance, lack of adequate sleep prior to a strenuous hike can dramatically affect the body's ability to regulate heat internally. And what teenagers travelling in a group, sleeping in sleeping bags or on uncomfortable cots, and under assault from mosquitos, ever get remotely adequate sleep? Clothes are also crucial. Hikers require hats and loose-fitting, absorbent clothing that "breathes" and allows sweat to evaporate efficiently. And a 14-day period of acclimatization is necessary before embarking on a long and strenuous hike.

The culture of the "hike" can be a matter of life and death. Not a few Israeli tour guides, especially those recently in the IDF, view their task as whipping "soft" Americans into shape. And young people, particularly males, are often too confident of their own strength and endurance or too eager to convey a "macho" image to signal their distress. Hikers must be schooled that they should immediately inform the hike leader if they feel unable to continue, and of the dangers of failing to do so. And hike leaders must be schooled that when a hiker pleads that he cannot go on, as Ariel did, those pleas must be heeded.

Finally, it is crucial that there be enough water to cool off a hiker who experiences EHS: If his or her body temperature can be lowered below 104 degrees F/40 C. within half an hour the chances of recovery are good. And there must be a tent or other means of creating shade for the victim.

I met the Newmans for a second time in March – we first met near their Great Neck home last summer – when they were in Israel for a whirlwind series of meetings with senior officials to promote the widespread use of Ariel's Checklist and to push for legislation imposing criminal penalties (Ariel's Law) for tour leaders and guides who fail to follow proper procedures resulting in disaster.

While here they met with Natan Sharansky, Chairman of the Jewish Agency, which has responsibility through MASA-Israel for almost every tour in Israel; with the director-general of the Tourism Ministry and other senior officials involved with the licensing and supervision of tour guides; and with Justice Minister Ayelet Shaked and MK Mordechai Yogev to promote Ariel's Law.

MASA-Israel has translated Ariel's Checklist into Hebrew and agreed to incorporate it as part of MASA's by-laws, making adherence to its guidelines incumbent on all tours operating under MASA's auspices. And the Tourism Ministry has undertaken to promote its distribution through hotels and its website and to incorporate Ariel's Checklist into all its training programs for tour guides.

Mark and Ellen Newman are doing everything possible to make sure that no other parents suffer what they have.

Every hiker or parent of hikers is encouraged to print and read the long version of Ariel's Checklist.

12-Year-Old Jewish Hero of WWII
Vayelech 5783: Regret and Repent
Rabbi Sacks: Focus On the Important, Not the Urgent
Put Your Foot Down: Are Human Feet Poorly Designed?
Comments
MOST POPULAR IN Israel
Our privacy policy
Aish.com Is Looking for Great Writers