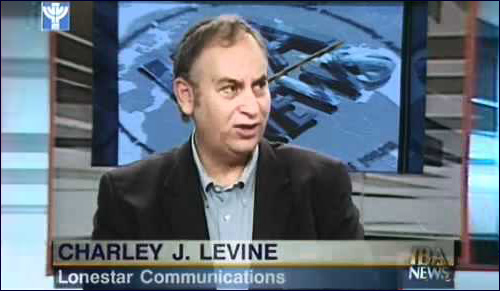 A tribute to Charley Levine, the Israeli-Texan PR giant.

Charley Levine, who passed away in Jerusalem last week at the young age of 62 from an aneurism, was a trailblazing Israeli-American PR professional who for decades was the "go-to" media advisor for a panoply of influencers – from Shimon Peres to Mike Huckabee, Hillary Clinton to Arnold Schwarzenegger, the Waldorf Astoria to Microsoft.

Charley hailed from Texas and he lived it. The enormous desk in his office was flanked by a huge Texas flag and longhorns on the wall. He had a penchant for big cars and his favorite mug, filled with homemade Cherry Coke, measured more than a liter in size.

Though Charley loved Texas, the deepest spot in his heart was reserved for the "other" Lone Star State: Israel. 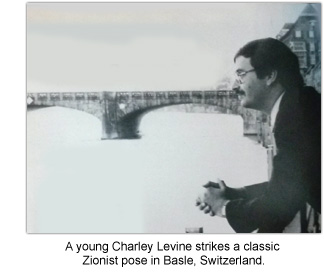 At an early age Charley had the good fortune of establishing his life mission: "Ambassador for Israel and the Jewish people." For nearly five decades, he pursued this goal relentlessly and with unparalleled skill and aplomb.

After serving in U.S. positions with Hadassah and Federation, Charley made aliyah and realized early on that opening a private PR firm would be the best way to positively impact Israel's PR image. Lone Star is recognized as Jerusalem's premier PR firm – sweeping national awards and upending the notion that Israeli PR is the domain of native Israelis operating out of Tel Aviv.

"I believe you can go much further and much faster in terms of career realization in Israel than you can in America," Charley once told me. "I don't think I would have gone into private business in America – I had a good job and probably would have remained content with that. Whereas in Israel, I had the opportunity and the incentive to fill a void in the market."

Charley was always full of new ideas, always ahead of the curve. I recall in the 1980s him pushing the concept of Israel as the start-up nation. "Israel needs to promote itself as a laboratory for entrepreneurs and private investors," he said. At one of our last meetings together, he shared his vision for a conference exploring what he termed "Jerusalem Denial Syndrome," the irrationality of jihadist sympathizers to deny the Jewish historical connection to Jerusalem 2,000 years prior to the advent of Islam.

It was this creativity and clarity that enabled a young Charley to finagle himself onto CNN (circa 1983) for a full 8-minute interview.

In a PR industry that sometimes borders on unseemly, Charley stood out for his integrity. His influence was felt on virtually ever major Jewish organization – left, right and center – all trusting him to do the best job possible. In at least one instance, Charley represented opposing candidates for a major public office.

Journalists as well trusted Charley to always be straight and fair. He had relationships with Charles Krauthammer, Jeffrey Goldberg, and New York Times columnist Thomas Friedman who – despite disagreement with some of Charley's political views – counted him as a friend.

In addition to his private PR work, Charley was quietly sent on diplomatic missions for the Israeli government – to various Arab countries and most recently to Washington. Charley, in turn, sent others on missions of his own device – like the time he arranged for me to be flown to Russia and lead a communal Seder.

One of Charley's prime fortes was his excellent writing that appeared for years in the Jerusalem Post and more recently online. His incredible archives of personality profiles for Hadassah magazine is a fascinating snapshot of modern Jewish life.

Above and beyond the professional achievements, Charley excelled in the personal realm. His unflappable nature was the perfect complement to his powerhouse wife, Shelly, and together they raised three successful children. Charley and Shelly adored one another. This past spring, in China to celebrate their 40th anniversary, Charley wrote in his diary: "I woke up today with the one I love."

With Charley's Texas-size confidence, he saw the good in every situation.

Charley exemplified what the Talmud (Avot 6:6) calls a "good heart" – one who rejoices in the success of others and does whatever he can to help. With Charley's Texas-size confidence, he saw the positive side of every situation. Ultimately, that quality is what made him so good at the business of PR.

I met Charley in 1988 soon after I arrived in Israel. As probably the only two people in Israel who'd studied public relations at the University of Texas at Austin, we forged an instant bond.

Charley took me under his wing – not only as a professional mentor, but welcoming me into the Levine home for frequent Shabbats where I was treated like one of the family. After my wedding, the Levines hosted a beautiful Sheva Brachot celebration at Charley's office. And when we needed a guarantor on our mortgage, Charley and Shelly were once again there to help.

And I'm not the only one telling such a story.

Another phenomenal achievement is Charley's diary. For a period of 52 years – every day since age ten – Charley wrote 100 words about significant events and personal thoughts. With remarkable consistency and foresight, he understood the transformational opportunity to track one's lifetime journey.

What an amazing life it was. With unwavering commitment to Israel and the Jewish people, Charley left an easier life in America and pioneered Israel's modern PR industry, making thousands of friends along the way.

Charley lived life to the fullest and gave his very best to others. He was warm, positive, genuine, loyal, and generous with time and ideas – available 24/7 for advice, guidance, and always (always) a quip.

When visiting a house of mourning, Jewish tradition calls for saying: "May God comfort you among the mourners of Zion and Jerusalem." Yet the name used here for "God" is not one of the typical names (such as Adon-oy, Elokim, or Shakai). Here we refer to God as "HaMakom," meaning "The Place." Why?

One explanation is that every person is created to fulfill his/her unique purpose, and thus a prime goal in life is to "know your place." (Hamakir et Mekomo of the 48 Ways)

A person's death leaves a vacuum of the particular "place" they filled in this world. It is then upon each of us to step in and fill that void – to somehow perpetuate the unique "place" that person occupied in God's grand plan. Doing so connects us to the memory of the deceased, increases their presence in the world, and brings comfort to the mourners.

Charley's passing increases the imperative for us all to redouble efforts, to pick up the slack. I've already begun to adopt Charley's 100-word diary concept. I can just hear him encouraging me: "The eyes of Texas are upon you," he would chuckle.

Shades of the Shoah
Can You Show Me This "God?"
How to Become Immortal
Judaism and Mental Health
Comments
MOST POPULAR IN Israel
Our privacy policy
Aish.com Is Looking for Great Writers