Those Who Can, Teach 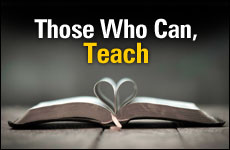 I’m not a rabbi, I never studied in yeshiva, and there’s so much I don’t know. So why am I teaching Torah?

I’m almost 60 and I just started teaching Torah. I never expected to do this – but now I see that I can. In fact, I think I must. Let me explain.

I did not start out on the path of Torah. Growing up in Queens in the 1950s, my upbringing was secular: no God, no shul, no Shabbat. I wondered what my friends did in Hebrew school, but my parents didn’t send me, so that was that.

And that could have been the end of my Jewish journey. But in 1991, I became a father. Soon enough my four-year-old son was asking questions. Such questions! He’s a deep thinker and his questions exposed how little I knew: “Daddy, how old is the world? Will it exist forever?” Gulp!

I needed to learn – and quickly – so I could answer him. I started taking classes, and then more classes. Now I had questions of my own that needed answers! I was inspired by Torah tapes from the Chofetz Chaim Heritage Foundation, classes in the Florence Melton Mini-School, and articles at Aish.com.

The more I learned, the more I wanted to know.

That also could have been the end of the journey. But the more I learned, the more I wanted to know.

I began learning with a study partner through Partners in Torah. We learned the weekly Torah portion, then some Talmud, then some classic works on spiritual growth. Later, I found a second study partner, and then a third (including a 5 am weekly phone session with Rabbi Jack Kalla from Aish.com). My study partners were remarkably patient and generous, and the hours I spent learning with them were the high points of the week.

Then my shul launched a new study group on Shabbos afternoons to learn Pirkei Avot (Ethics of the Fathers), the beautiful tractate of the Mishna dealing with ethical living and improving one’s character. I had never even heard of Pirkei Avot, but I already loved textual study, so I volunteered to lead the new group.

For the next two years, we slowly made our way through Pirkei Avot, covering one mishna each week. I prepared by studying Ethics from Sinai and other commentaries in English translation.

We made a siyyum (festive meal) when we completed the tractate. I felt a sense of accomplishment from being involved in something so meaningful. And that (last time, I promise) also could have been the end of the journey.

Can I Do More?

This past December I heard a powerful talk by Rabbi Shlomo Farhi at the Aish HaTorah Partners Conference. He mentioned a song with the chorus, “Avraham, are we the children that you dreamed of?” Would our forefather Abraham be pleased with the lives we are living today? The question unsettled something at my core.

Rabbi Farhi continued: When we pray, we often refer to God as “Elokay Yaakov,” the God of Jacob. Great, but what about us? What have we done to make Him our God, too? And is it enough?

Well, that did it. Wiping away tears, I tried to think about what else I could do. Slowly, it dawned on me that I can teach other Jews what I know, which is Pirkei Avot.

So I thought about the Jews I know who are not involved in some kind of regular learning. Then I asked four of them if they would be willing to learn with me by phone once a week. To my surprise, all four said “yes,” and they actually seemed excited about it!

Then I made a brief business visit to the home of a man I barely know. As I was leaving, I saw a baseball cap near the door that said, “Maimonides.” I asked about the cap.

He explained that he studied the Rambam’s “Guide to the Perplexed” back in high school and loved it. So I took a deep breath and asked if he’d like to learn with me. Once again, to my surprise, the answer was “yes.”

So now I learn weekly with five individuals, and they stimulate me with great questions, and I work hard to find good answers. It’s my way of grappling with the challenge that Rabbi Farhi posed.

But this raises a question: Who am I to teach Torah? I’m not a rabbi, I never studied in yeshiva, and there’s so much I don’t know.

Here is the answer given by the Chofetz Chaim.

At Agudath Yisrael's first meeting in the early 1930s, the Chofetz Chaim urged everyone to fulfill their obligation to do whatever they could to save their fellow Jews from the forces of assimilation that were raging through Europe during the era of "isms." His urging met with protest. "How we can tell others to do what we haven't perfected ourselves?"

The Chofetz Chaim responded with a parable. A traveler was invited by a wealthy man to have a cup of tea. When the guest looked into his cup, he saw sediment that had settled on the bottom. "Where is your water from?" he asked. When told that the town's water came from a local river, he advised his host that the town needed a filtration system. The system was installed, and thereafter, the water was crystal clear. It worked well until a huge fire broke out some time later and burned down half the town.

The next time the traveler was in town, he heard what had happened and inquired, "Couldn't you put out the fire?" The people replied, "It took a long time for the water to work its way through the filtration system, and there wasn't enough filtered water available to quickly control the flames."

"Fools!" said the traveler. "You don't need filtered water to put out a fire!"

The Chofetz Chaim went on to explain to those who resisted his call to outreach, "There is a fire raging in Klal Yisrael. We must grab whatever water we have and use it to douse the flames. Every Jew, on whatever level he or she is on, has to use his own capabilities to help extinguish the raging flames around us.”

This article is dedicated in loving memory of the author's father, Reuven ben Ya'akov z''l.

Click here if you would like a free study partner to learn with you over the phone.

Michael Steinberg lives in the Washington, D.C. area, where he studies Torah in person, over the telephone, and over the Internet.