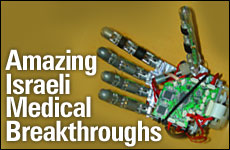 We all appreciate the feeling of a fresh breeze on our faces, the feeling of freedom as we take a jog or a walk. For too many people, however, injury or disease can make the joys of unimpaired movement a distant dream.

Here are some amazing Israeli medical breakthroughs that are helping people overcome their limitations today.

Claire Lomas walked the London Marathon, beginning on the marathon date, April 21, 2012. Her time was slow: 16 days, to be exact. But her feat electrified all of Britain, for this 32 year old mother has been paralyzed from the chest down since a horse riding accident in 2007.

Ms. Lomas was able to walk the 26-mile course using a revolutionary new body suit, the ReWalk, developed by medical researcher Dr. Amit Goffer in Israel. The ReWalk works by providing support to enable paralyzed wearers remain upright. It then senses minute changes in pressure and direction in the wearer, and responds by mimicking the movements they indicate. Patients wearing the ReWalk can sit and stand, walk, and even climb stairs. http://israel21c.org/social-action-2/rewalking-her-way-to-the-finish-line/

Whereas the ReWalk amplifies slight body movements of the wearer, another Israeli invention allows paralyzed people to become more self-sufficient with no physical input at all.

Doctors in US are currently testing a robotic arm designed by the Israeli bio-tech company BrainGate, which has allowed a woman who was paralyzed by a stroke 15 years ago to take a sip of coffee from a robotically-controlled “arm”. She controls the arm using sensors implanted in her brain. Click here to watch a video of this feat.

Sensors are placed in the brains of patients in the trials, which then detect the area of the brain in which activity – thought – is occurring. Patients imagine moving their own bodies, and this sends electronic signals from the sensors to robotic arms which then mimic the desired movement. One man enrolled in the BrainGate trial reported "I just imagined moving my own arm and [the robotic] arm moved where I wanted it to go.”

Israeli researcher Dr. Amir Amedi, of the Hebrew University of Jerusalem, has developed a way to let blind people “see” using sound. This non-invasive invention consists of a computer mounted on glasses, connected to stereo speakers. The speakers interpret visual data into sound cues. After a brief training sessions, users learn to use these sophisticated sound cues to navigate.

Remarkably, magnetic resonance imaging scans show that the brain waves of people wearing this invention closely mimic those of people who are actually seeing: Dr. Amedi’s glasses enable blind people to sense the location of objects, and even to read words.

This research follows Dr. Amedi’s previous breakthrough: his invention of a high-tech replacement of the traditional seeing-eye cane. Dubbed the “yes-eye-cane” cane, this cellphone-sized device uses sonar to estimate the distance of objects. The cane can tell users how big objects are, how far away they are, and can even tell the difference between a frowning face and a smiling one. It functions at distances traditional canes can’t, both very far away and extremely close, and can retain a charge for 12 hours. Researchers who worked on this revolutionary new aide reported being able to navigate mazes with it after a short training period. http://www.jpost.com/Sci-Tech/Article.aspx?id=226026

Scientists at Israel’s celebrated Weitzman Institute have built sensors that allow paralyzed people to operate wheelchairs and communicate using only their sense of smell.

The sense of smell doesn’t depend on nerves routed through the spinal cord, and thus is usually unaffected even in cases of severe trauma resulting in paralysis. Israeli researchers Noam Sobel and Anton Plotkin realized they could measure minute changes in pressure inside patients’ noses as they smelled different scents, and translates this into an electric charge. This has allowed people who are totally paralyzed to move wheelchairs, write computer code, and even play video games.

The successfully tested their groundbreaking invention in the Levinstein Rehabilitation Hospital in the Israeli town of Ranana. One patient, who had been paralyzed for ten years, was able to communicate for the first time since her stroke-induced paralysis, and write e-mails to her grandchildren using this technology.

Diabetic children have experienced remarkable new freedoms at an experimental summer camp in Israel. At the Schneider Children’s Medical Center in the Israeli town of Petach Tikva, researchers from around the world collaborated under the leadership of Israeli researcher Dr. Moshe Phillip on the world’s first trial of an artificial pancreas.

The children in the study swam, played sports, and enjoyed summer camp unencumbered by insulin injections and glucose monitoring. Insulin levels were monitored by staff remotely, and the children’s insulin was delivered through insulin pumps. For the duration of the camp, at least, participants were able to forget they had diabetes while experiencing superior levels of insulin control at the same time.

Many elderly and seriously ill patients can develop chronic wounds, which resist healing for months or even years, rendering them chronic patients, plagued by pain. A new Israeli invention, currently in trials, helps the body to heal itself of this serious medical condition.

“CureXCell” was invented by Dr. David Danon of the Israeli national blood service, and is being commercially developed by the Petach-Tikvah based company MacroCure. The medicine uses white blood cells, which are usually discarded from donated blood, and introduces these white blood cells into the vicinity of chronic wounds. This helps stimulate healing. For the first time, patients with chronic wounds have the potential to heal from this debilitating condition.

Prosthetic limbs have been around since ancient times, but Israeli scientists have recently found a way to connect a connect a prosthetic hand to a patients’ brain, allowing not only movement but also feeling.

Dr. Yosi Shacham-Diamand of Tel Aviv University led a team of scientists that figured out a way to attach sensors from an artificial hand to a patient’s nerves. Robin af Ekenstam, a young Swedish musician who had lost his right hand to cancer, was the first to be fitted with this special artificial hand. After using it for several months, Mr. Ekenstam told Swedish TV that it felt like a real hand: “When I grab something hard, then I can feel it in the fingertips, which is strange, as I don’t have them anymore. It’s fantastic.”

Click here to watch a video of Mr. Ekenstam using this remarkable hand. It’s a sad commentary that Israel is often denied credit for its amazing medical breakthroughs due to anti-Israel bias. This video, produced by Britain’s BBC news service, goes out of its way to avoid mentioning Israeli involvement in this ground-breaking invention.