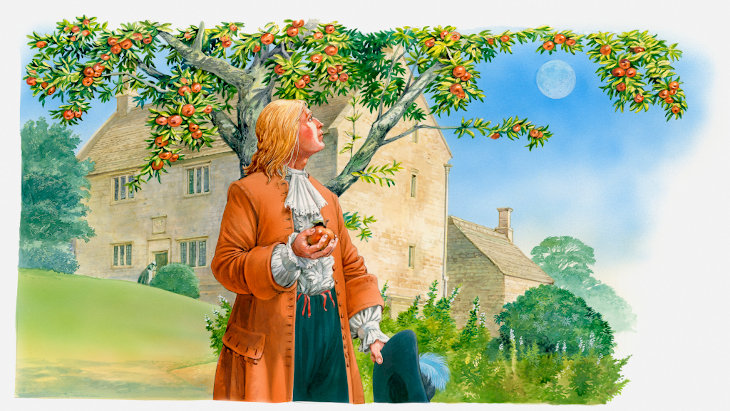 While the bubonic plague raged elsewhere, Newton, in seclusion, embarked on what he'd later describe as the most intellectually productive period of his life.

On Christmas Eve in 1664, a London resident named Goodwoman Phillips was found dead in the run-down district of St. Giles-in-the-Fields. Telltale “buboes” on her corpse left no doubt about the cause of death. Her house was sealed and the words “Lord Have Mercy On Us” were painted on the door in red: Phillips had died of bubonic plague.

Only a few other deaths from plague were reported over the next few months. But by April, the numbers had begun to climb markedly. When summer arrived, death was everywhere. Records from mid-July showed 2,010 deaths, spread among every parish in London. The death toll a week later had jumped to 7,496. Over a period of 18 months, the Great Plague of London, as the epidemic came to be called, would claim more than 100,000 lives – roughly a quarter of the city’s population.

Then as now, social distancing was an important response to the deadly outbreak. Urban residents who could afford to do so fled to the countryside. Among the institutions that closed for the duration was Cambridge University, and among the students who headed home for what today we would call self-quarantining was a 23-year-old mathematics student by the name of Isaac Newton.

For the next year and a half, Newton remained at his family’s farm in Lincolnshire, reading, studying, and thinking alone. While the bubonic plague raged elsewhere, Newton embarked on what he would later describe as the most intellectually productive period of his life.

One subject that had always interested Newton was light and color. Two years earlier, visiting the annual Sturbridge Fair near the university, he had purchased a small glass prism. He had been fascinated by the way the prism seemed to change white light into a spectrum of rainbow-like colors. No one understood where those colors came from; one theory was that the glass somehow added color to otherwise colorless light.

Newton decided to use his enforced absence from Cambridge to try and crack the mystery. Setting his prism in different positions as the sun streamed through his south-facing window, he carefully noted where the colors appeared on the wall across the room. He made detailed observations and measurements , and gradually came to understand that the prism was refracting – that is, bending – the sunlight, and in the process revealing its component colors. Newton had discovered that white light is a blend of every color in the rainbow, but that those colors become visible only when light rays are refracted at different angles.

All of modern optics builds upon Newton's discovery. It would be another seven years before he communicated his findings to anyone else, and nearly 40 years would elapse before he published his findings in book form. But the groundbreaking insights dated to those months of self-quarantine on a farm in Lincolnshire.

That wasn’t all that occupied Newton’s mind. He turned his attention to movement and inertia, and what was then the unsolved problem of how to measure the changing speed and direction of an object in flight. Shoot an arrow or fire a cannonball: They hurtle upward, then gradually slow, then change direction and plunge back down. But what determines their velocity and direction? This was a mystery no one had solved – until Newton focused his attention on the question of motion and how it was governed. Gradually he worked out the three essential laws that make motion comprehensible:

Newton’s laws laid the foundation for classical mechanics, and upon it generations of physicists would build towering edifices. The mathematics required to derive these laws – which involve multiple variables with continuously changing quantities – did not exist in Newton's day. So he invented an entirely new mathematical discipline. He called it his “method of fluxions,” though eventually it would be known as differential calculus. (Independently, the German scholar Gottfried Leibniz would later develop it as well.) Without calculus, modern mathematics, engineering, and statistics would be impossible. 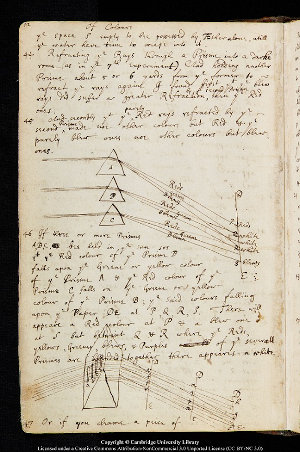 A page of Isaac Newton's notes on light and color, written during his annus mirabilis in 1665-66.

Any of these achievements would have assured Newton's fame. But the heights he scaled during his months of isolation were greater still.

In his garden one day, an apple really did fall (or so he recalled as an old man decades later). The young university student pondered the force that pulled that apple to the earth. It was a force that seemed to operate even at great distances: An apple dropping from the highest tree imaginable would still hit the ground. How far out did this force reach? Perhaps all the way to the moon. Yet the moon didn't fall to the earth, but traveled around it instead. Why?

The problem of celestial movement vexed the intellectuals of Newton's day. They could envision a globe being swung on a chain, circling round and round, centripetal force holding it in a steady orbit. Cut the chain, however, and the circling stops – the globe flies off in a straight line. Yet heavenly bodies don't fly off in straight lines. Though untethered by chains, they move in fixed orbits. How could that be?

Alone in Lincolnshire, Newton solved the puzzle: Incredibly, he discovered the law of gravity. The same force that pulls an apple to the ground holds distant planets in their paths. That was the chain linking the moon to the earth and the planets to the sun. Gravity couldn't be seen or touched, but it could be proved with mathematics. He filled page after crowded page with his calculations, and eventually derived the formula that, he said, “allows me to explain the system of the world.”

For nearly 20 years, Newton told no one of his discovery. When he finally published his great treatise on motion and gravitation – its title was Philosophiæ Naturalis Principia Mathematica (Latin for Mathematical Principles of Natural Philosophy ) – the effect was seismic. Newton’s discoveries, in the words of Alan Charles Kors, a professor of history at the University of Pennsylvania, amounted to “one of the most extraordinary scientific syntheses in the history of the human mind.”

The Principia is generally reckoned the most important book in the history of science. It jolted Western civilization to its core, for it demonstrated, as no prior work ever had, that the universe was lawful, logical, and knowable. To a deeply pious Europe, it meant that mere mortals could perceive the very blueprint of Creation. To study the world empirically, to understand its workings, was to come closer to the mind of God than had ever been thought possible. Newton's insights during the months of plague that kept him at home imposed a mathematical order to the universe that permanently closed the door on the age of magic, and opened the door to something even more wondrous: the triumph of modern science. That astonishingly fruitful period of “social distancing” came to be known as Newton’s annus mirabilis – year of wonders.

Unlike so many who perished during the Great Plague of London, Newton lived a very long life. He was 84 when he died in 1727, and was interred with many honors in Westminster Abbey.

But his most famous epitaph was the couplet composed by Alexander Pope, the famed English poet:

“Nature and Nature's laws lay hid in night,
God said, Let Newton be! – and all was light.”

This article originally appeared in Jeff Jacoby's Arguable email, that is produced by the Boston Globe.

Altering Genes
It Takes A Lot Of Faith To Be An Atheist
How Instagram Brought Back This Nostalgic Soup
What Makes Eli Run?
Comments
MOST POPULAR IN Current Issues
Our privacy policy