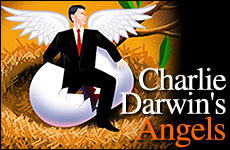 Who says the theory of evolution is scientific?

A federal district court judge in Pennsylvania ruled last month that a few brief paragraphs read to schoolchildren informing them that there are holes in the Darwinian theory of evolution and that an alternative theory of Intelligent Design exists violated the US Constitution's establishment clause. Judge John Jones did not consider, however, whether Darwinism might itself be a form of religion, or anti-religion, based largely on a priori assumptions.

In the apt phrase of Berkeley law professor Philip Johnson, Darwinism is the "creation story of scientific naturalism" -- the doctrine that everything can be explained by natural, material forces.

For tactical reasons, Darwin's scientific supporters often prefer to minimize the clash between traditional religion and the Darwinian vision of all life developing via trillions of random micro-mutations sifted by natural selection. Many, however, candidly admit that Darwin leaves no room in human affairs for God.

For George Gaylord Simpson, Darwin shows that "man is the result of a purposeless and natural process that did not have him in mind."

Darwin's mechanistic universe establishes further, according to Cornell's William Provine, that there are "no moral or ethical laws..."

Yet, as the brochure for the British Museum of Natural History's 1981 exhibit on Darwin noted, "evolution by natural selection is not strictly speaking scientific because it is established by logical deduction rather than empirical demonstration." When the museum's chief paleontologist Colin Patterson asked the members of a graduate seminar in evolutionary morphology at the University of Chicago to tell him just one thing that they knew to be true about Darwinian evolution, based on empirical evidence, the result was a long and embarrassed silence.

Karl Popper famously defined a scientific theory as one that can be falsified. When Einstein propounded his General Theory of Relativity, for instance, he made a series of bold predictions based on the theory.

By contrast, Darwinists proceed by assuming the truth of the theory and then seeking empirical support. Studies of the fossil record that fail to buttress the theory are deemed "failures" and never published. The search for Darwinian common "ancestors," according to Gareth Nelson of the American Museum of Natural History, proceeds on the assumption that those ancestors exist and then selecting the most likely candidates.

The mechanism by which nature is alleged to have fashioned a single ancestor into both whales and man has never been observed. Indeed, its existence is based on a wild extrapolation from the commonplace observation that within a single species different traits provide a survival advantage in certain circumstances -- e.g., black moths fare better vis-a-vis predators against a sooty backdrop and light moths do better in a clean environment. That's a long way from creating new species.

Faced with these challenges, the Darwinist response is largely confined to rhetorical efforts to shut up the questioner.

Nor can Darwinists explain how complex systems, such as human sight, none of whose component parts would alone provide any advantage, could have come into being by a long series of micro-mutations. The best Darwinists can offer in response are what Harvard professors Stephen Jay Gould and Richard Lewontin call "just-so" stories about how each of the postulated (but never observed) changes in each part of the system conferred some advantage.

Faced with these challenges, the Darwinist response is largely confined to rhetorical efforts to shut up the questioner: "You're advocating specific creation" or "What's your alternative?" The latter question, Philip Johnson notes in his invaluable Darwin on Trial, is like telling a criminal defendant he can't offer an alibi until he can produce the perpetrator. And the force of the question derives exclusively from the fact that all elements of design have been ruled out of consideration a priori, as failing to conform to scientific naturalism.

The fossil record fails to provide evidence of the millions of transitional species that Darwin's theory assumes have existed. Their absence, writes Stephen Jay Gould, is the "trade secret of paleontology." The fossil record is largely one of species and groups of species coming into existence fully formed, remaining unchanged throughout their history, and becoming extinct by virtue of some great catastrophe, not because they were replaced by better-adapted descendants. Nor, according to paleontologist Stephen Stanley, does the fossil record provide a single example of "major morphological transition."

Admits Niles Eldridge: "We paleontologists have said that the history of life supports the story of gradual adoptive change, all the while knowing that it does not."

Faced with the poor fit between the empirical facts and Darwin's theory, scientists face the unpalatable choice between maintaining the theory, despite its poor fit with the observed facts, or introducing the types of major leaps, or "saltations," that Darwin rejected as incompatible with his theory. Those leaps, whether in the form of geneticist Richard Goldschmidt's hypothesis of stable macro-mutations, or Otto Schindewolf's suggestion that the first bird hatched from a reptile egg, or Eldridge and Gould's theory of punctuated equilibrium, are, as Darwin recognized, as supernatural as God's hand. Worse, as Eldridge puts it, they require the "embrace of a rather dubious set of biological propositions."

Even if Darwinian theory were in better shape than it is, the scientific naturalists' project of eliminating all elements of design from nature would still founder on the creation of life itself. Cambridge astronomer Fred Hoyle once compared the chances of forming the simplest one-cell bacterium from pre-biotic soup as roughly equivalent to that of a tornado sweeping through a junkyard and producing a Boeing 747. Even a one-cell organism makes a spaceship look low-tech by comparison.

Hoyle also discovered that carbon, the basis of all organic life, could have only been fashioned in the original solar furnace because of the perfect nuclear resonance between two sets of simpler elements. His conclusion: "[A] superintellect has monkeyed with physics, as well as with chemistry and biology, and there are no blind forces worth speaking about in nature."

It is time to stop teaching our children that science has answered all the questions and eliminated God from the cosmos.

The Wonder of Thunder