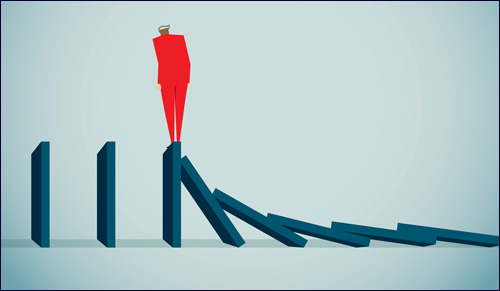 When my late wife was first diagnosed with cancer I found it difficult to believe that everything God does is for the best.

This is an excerpt from Rabbi Shaul Rosenblatt’s new book Why Bad Things DON’T Happen to Good People. The book provides a forthright response to the age-old question of human suffering in the face of a good and just God. Rabbi Rosenblatt draws on his experiences during his late wife’s illness and subsequent passing, at the age of 30, leaving behind four very young children.

When he awoke in the morning, he ventured into the city and realized that bandits had attacked it during the night, capturing many people. Had he found a place to stay, he would probably have also been captured. Had the bandits noticed a lamp in a field nearby or heard his donkey or rooster, he might also have been in trouble. Instead, his life was saved by all the “bad” things that happened to him.

Now if God had wanted to save Rabbi Akiva from the bandits, surely He could have let him find a nice room in the city for himself, his lamp, his rooster, and his donkey and let him sleep through the night unmolested. If God is all powerful, then He can do things in a way that is more, rather than less, comfortable. Rabbi Akiva might have been saved, but he still went through pain. Why could he not have been saved in a painless way?

I think that there was a message here for Rabbi Akiva. Yes, he was a great enough man that he should be saved in a miraculous way. But he did not merit an open miracle of staying in the city and being saved during a rampage. There was something lacking in him that God was trying to point out to him. Yes, it was good – for it is always good. But it was painful also, and in pain there is always a lesson.

No human being, not even a man as great as Rabbi Akiva, is perfect. God is teaching him and guiding him always – as indeed he is doing with all of us. There was a lesson that God wanted Rabbi Akiva to learn and most surely he learnt it from his experience and became an even greater man because of it.

The idea of saying “Everything God does is for the best” is something that our sages suggest we do to help point us in the direction of these lessons. Let me explain a little how that works.

My late wife, Elana, was first diagnosed with cancer in 1998. She was 27. When we first heard the news, I found it very difficult to believe that “everything God does is for the best” could possibly apply in our situation. In fact, Elana was able to say the phrase much sooner than I. The whole experience caused me to examine what our Sages mean by this phrase, and I discovered an insight that has made it possible for me to say it very easily nowadays.

I used to understand the idea as follows. When something bad happens to you, take a moment to remind yourself that God has a plan; that He knows what he’s doing and he’s not making a mistake. It looks bad, but that’s only how it looks on the surface. You’ll look back one day and realize just how good it was.

That’s how I used to understand the purpose of saying this phrase – simply to remind us that God is in control at a time that one might panic and forget.

Now I think that the idea is much, much deeper.

We live in a neutral world. Everything has the potential to go one way or the other. A gun can kill, but it can also protect. Medicine can heal, but too much of it or given in the wrong circumstances, can make you sick. Computers can enhance our lives – and they can help us to waste our lives. Nuclear energy can light up cities – and destroy civilizations. Even something like Torah – a book of wisdom for life – the Rabbis tell us can be an elixir of life or an elixir of death. All is neutral depending on how it is used. Things become good or bad depending on human choice – they do not start out that way.

Our response defines whether an event will bring more good feeling to our lives or more problems.

The same is true of events in our lives. Our response is that which defines which way they will go, whether an event is something that will bring more good feeling to our lives or bring us more problems. All events, as such, are completely neutral. You win the lottery. There is a lot of good there. You can support your family. You can enjoy God’s beautiful world. You can give money to charity. You can be free to pursue meaning and wisdom. That’s all great. But with money comes other things.

From now on, how will you know who is sincere in their friendship for you? How will you be able to trust people? You will become much more of a target for robbery. You will be more likely to worry and think about losing your money now that you have it. I remember once talking to a man who lives in a forty-million-pound house on a beautiful road in London. He was telling me about how wonderful his security was – he had dogs and he had cameras throughout his house, as well as all the way up his driveway. (Before the cameras, he was once attacked in his driveway and he and his wife were beaten up before the thieves ran off with his money.) I told him that I have no cameras. I have no dogs. I open my door to strangers without fear. Is the money really worth it? And he wasn’t sure.

Money has its blessings but also its curses. It’s just that the blessings are more immediately obvious and the curses are a little more subtle. The same is true of ‘bad’ things. Let’s take a person’s house burning down. It’s easy to see the bad elements of that, but what about the good? Well, there are many possibilities. Maybe it will give him more humility – something worth much more than a mere house. Maybe he will have to spend time with his family in less spacious surroundings and will have the opportunity to get closer to them as a result. Or maybe even just the challenge itself will be something that brings them closer together. Maybe it will put life and possessions into perspective for him. There are many positive elements one could focus on, depending on the circumstances. And the choice is always ours to make.

The person is being presented with a challenge: this is good, now go and find out why.

“Everything God does is for the best” is a reminder, at a time of seeming challenge, that there is good in this also. It’s a reminder for a person to choose. The person is being presented with a challenge: this is good, now go and find out why.

At the moment of a new and difficult experience in life, there is a choice to be made – will I look for the good or will I wallow in the frustration and upset? Do I want to find good, or am I satisfied with how it seems on the surface?

Saying “Everything God does is for the best” is simply a form of orienting oneself. Let me be open to the good. And when a person is open to the good, he will always find it.

Six Famous Questions from the Torah

How the Torah Revolutionized Political Thought

Urban Myths and Misconceptions about Judaism
It Takes A Lot Of Faith To Be An Atheist
How Instagram Brought Back This Nostalgic Soup
What Makes Eli Run?
Comments
MOST POPULAR IN Spirituality
Our privacy policy