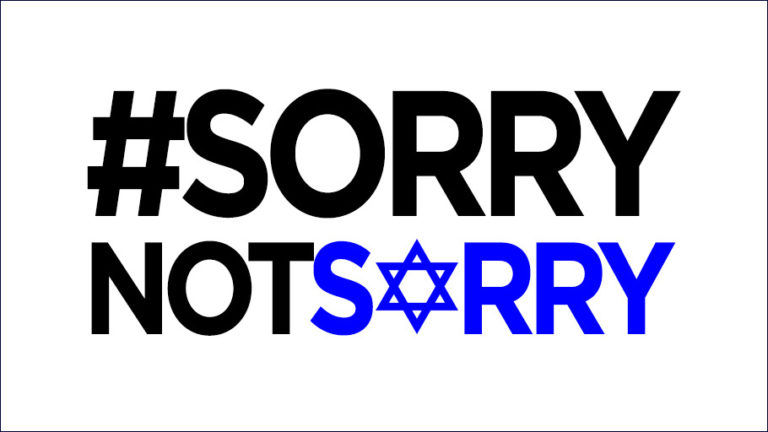 Caring about others and showing love means that you’re willing to say you are sorry. Too many people are unwilling to say they are sorry. They lack the humility, self-awareness and remorse to take responsibility and to make amends.

But lately, on the opposite end, it feels as if it is becoming popular to say sorry and ask for forgiveness for things that one has nothing to apologize for.

The New York Times had a question posed to their advice columnists last week that I am struggling to determine if it is real or just satire:

I’m riddled with shame. White shame. This isn’t helpful to me or to anyone, especially people of color. I feel like there is no “me” outside of my white/upper middle class/cisgender identity. I feel like my literal existence hurts people, like I’m always taking up space that should belong to someone else…I donated to Black Lives Matter. Yet I fear that nothing is enough. Part of my fear comes from the fact that privilege is invisible to itself. What if I’m doing or saying insensitive things without realizing it?

Does one now have to apologize for being white, or simply for being and taking up space? I cite this as an extreme example, but the trend calling for apologies has infiltrated our own heritage. In a recent column in the Forward, a mother writes:

As parents of young Jewish children, we’re taught to pray on Shabbat that our daughters be like Sarah, Rebecca, Rachel and Leah. It’s never occurred to me to question how literal we’re meant to be. I can’t say I’d wish the fate of any of our Matriarchs on the young women in my life, much less on my own little girl… I give the blessing as a tribute to the Matriarchs’ faith and forbearance, not to the lives they led or the choices they made, which feature plenty we find morally repugnant today.

The author is embarrassed by our tradition and uncomfortable with the idea that we bless our daughters to emulate our sacred Matriarchs. Maybe we should offer a collective apology to our daughters throughout the millennia for holding out the wrong role models for them, ones who made “morally repugnant” choices?

Yet in other news, the Israeli Reform movement has decided to expunge Aleinu, a central prayer of our Siddur that has been recited by Jews for thousands of years, over concerns that it is offensive. Throughout history, our adversaries censored the siddur from language they found disparaging, including editing parts of Aleinu. Perhaps for the first time in history, we Jews are censoring ourselves.

And lastly, some reactions to Israel’s recent Nation State Bill, which reflect a certain sense of shame and embarrassment that Israel would be defined as the “national home of the Jewish people,” are quite troubling to me. It is perfectly understandable to be concerned with the impact of some of the language and the law on minority populations in Israel. One can respectfully debate the timing and value of the bill as well.

What does God thinks when, after 2,000 years of exile, He sees so many Jews apologetic and defensive about calling Israel a Jewish state?

However, I shudder imagining what God thinks when, after 2,000 years of exile and our longing to come home, He sees many of our own people apologetic and defensive about calling Israel a Jewish state. Could there be a greater act of ingratitude to God than proclaiming that His gift to us, His people, isn’t really ours?

The very first Rashi on the Torah tells us that God begins the Torah with the story of creation so that if anyone challenges the Jewish right to Israel, they will be reminded that God Who created the world also designated that special land to the Jews. Would those who deny the Jewish right to the land really care how the Torah begins? Sadly, we see that Rashi’s insight is not directed necessarily at our external adversaries. Rather, the Jewish people from within need to be reminded that this is our land. We need never apologize or be defensive for proudly proclaiming and even legislating that Israel is the “national home of the Jewish people.”

It seems to me, in this season of forgiveness, the one deserving some of these apologies is the Almighty, for how in the interest of political correctness, we sometimes put His agenda second and our eagerness to be loved and to integrate first. If He created us as a certain race or ethnicity, we aren’t taking up anyone else’s space, and while we must always carry ourselves with sensitivity and concern for others, we must not apologize for our existence or for being ourselves.

Aleinu was composed by Joshua thousands of years ago upon our entry to the Land that God promised us. When he encountered pagan religions and idolatrous practices, he reacted with a sense of gratitude of being “chosen” to model an authentic, mission-driven religious life. To edit the siddur to conform to our contemporary sense of comfort is an affront to our ancestors who said those words throughout the millennia and to God who transmitted its themes to us in the first place.

Neither you nor I would let anyone dishonor our grandmothers by describing them as people who made morally repugnant decisions, and we shouldn’t tolerate someone disparaging our great Matriarchs that way. They, like our Patriarchs, were not perfect. But even with the ideologies and “isms” of our time redefining gender roles and opportunities, we can still only dream that our daughters have the righteousness, kindness, faith and tenacity of our holy Matriarchs, whom we continue to draw from for inspiration and hold up as role models.

Indeed, there are plenty of apologies we should be offering this time of year. There are affronts, hurts and injuries for which we must make recompense. Perhaps among them we need to apologize for being so apologetic about our Jewish values, practices, and beliefs.

The very first law in the Shulchan Aruch, our code of Jewish practice states: “One should strengthen himself like a lion to get up in the morning to serve his Creator…And one should not be ashamed because of people who mock him in his service of God.”

Did you interpret the times through the prism of Torah or did you try to make Torah conform with the interests of the times?

Our measure and metric for whether or not to hold a belief, pursue an action, recite certain words or have specific role models is not contemporary culture, the latest fashion or fad, or the ideology of our day. It is what does God want from us, what has He dictated to us and what does He expect from us. Instead of the passing notions and beliefs, we would serve ourselves and our existential purpose best by being proud and unashamed of our Jewish values, beliefs and practices.

The Talmud (Shabbos 31a) states: “Rava said: When a soul appears before the Heavenly tribunal to be judged, he will be asked: ‘kavata itim la’Torah,’” literally translated as, “Did you set aside time for the study of Torah?” Rav Soloveitchik encouraged us to read it differently: kavata itim l’Torah or kavata Torah l’itim? Did you interpret the times through the prism of Torah or did you try to make Torah conform with the interests of the times?

We are positively informed and inspired by the world in which we live, but we must measure its value and influence by its compatibility with Torah, not the other way around. We have not survived and thrived against all odds through an ever-changing world by adapting to, and adopting from, values and visions that are in conflict with our own.

In this season of apologies, let’s be careful not only for what we apologize for, but what we need not be apologetic about. Jewish continuity will be served by pride in who we are and what we represent.

When it comes to our loyalty to God, love means never having to say we are sorry for our Jewish values.