Free Will and its Deniers 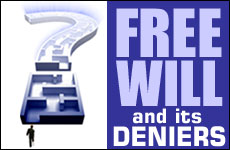 Free choice is humanity's "greatest gift," a gift that itself makes life worth living.

The belief in man's elevation over the animals is under assault in the West. Denial of free will -- and with it the possibility of morality -- is central to that attack. If man does not possess the freedom to choose, he is no more morally culpable for his actions than a lion for eating its prey. At the end of the day, he is just another animal whose actions are determined by his instincts.

Writing recently in The New York Times, Dennis Overbye takes off from his inability to resist molten chocolate cakes on the dessert menu to consider a "bevy of experiments in recent years suggest-[ing] that the conscious mind is like a monkey riding a tiger of subconscious decisions. . . frantically making up stories about being in control."

Mark Hallett, a neurological researcher, informs Overbye that free will is nothing more than an illusion, a sense that people have. Philosophy professor Michael Silberstein points out that all physical systems that have been investigated turn out to be either deterministic or random. Either alternative is inconsistent with free will.

Many find it convenient to use the compulsion defense to avoid the moral censure of their own conscience or of others.

Hallett is right that no one consistently experiences life as lacking all choice -- even Overbye could resist the chocolate cake if the reward were great enough or the punishment immediate enough. Many, however, find it convenient from time to time to use the compulsion defense to avoid the moral censure of their own conscience or of others. ("The heart wants what it wants," said Woody Allen of his affair with his lover's 17-year-old adopted daughter.)

Life without the sense "that things are really being decided from one moment to another and that it is not the dull rattling off of a chain that was forged innumerable ages before," wrote William James, would lose all its "sting and excitement."

The Torah identifies the act of moral choice with life itself: "I have placed before you life and death, the blessing and curse; choose life" (Deuteronomy 30:19). True life is to be able to choose the blessing over the curse. Isaac Bashevis Singer got it right when he told an interviewer that free choice is humanity's "greatest gift," a gift that itself makes life worth living.

Fortunately, those who treasure their sense of themselves as choosing beings need not concede that our choices are illusory or that man is nothing more than an animal driven by instinct. Man differs in myriad ways from every member of the animal kingdom. Only man can imagine a variety of future possibilities and guide his actions in accord with those imagined futures.

Hans Jonas points out in Tool, Image, and Grave: On What is Beyond the Animal in Man three ways in which man is distinguished from animals. Only man designs tools to achieve particular purposes. Only man creates physical images to recall past events or to contemplate future possibilities. And only man buries his dead, and is moved by a lifeless form to contemplate something beyond the physical universe. "Metaphysics arises from graves," Jonas informs us.

In his Laws of Repentance, Maimonides describes an act of complete repentance: "He had forbidden relations with a woman, and after a period of time, he finds himself alone with her. His love for her is unabated; he is undiminished in his physical capacities... Yet he separates himself and does not sin." Everything remains the same, except for the choice of the actor involved. Who has not experienced a comparable internal struggle and, hopefully, a similar triumph?

"You deny free will because you are in fact unfree; you have enslaved yourselves to the evil within you."

None of this is to argue that the range of our choice is unlimited. Each of us is a product of his education. And each of us is born with a personality, as any parent of more than one child knows. Nor is the exercise of our choice random. If people did not find themselves repeating familiar behavioral patterns, no one would ever go to a therapist.

Finally, the human mind is not a tabula rasa, as Chomsky's work on linguistic structures and Piaget's on the stages of moral reasoning demonstrates. Harvard psychologist Daniel Gilbert shows in Stumbling on Happiness all the ways that we make systematic mistakes when we project ourselves into the future.

In his Discourse on Free Will, Rabbi Eliyahu Eliezer Dessler describes how the area of free will differs for each and every person, based on education and other factors, and how it shifts constantly. It is only possible to speak of the exercise of free will, he writes, at that point where a person's apprehension of the truth, i.e., what is right, is in perfect equipoise with a countervailing desire. Precisely at that point, nothing besides the person himself determines the outcome.

Rabbi Dessler employs the spatial metaphor of a battlefield to capture the process. The point at which the battle is joined is the point of free will. Behind the battle line is captured territory -- the area where a person feels no temptation to do other than what he perceives as right. And behind the enemy lines are all those areas in which a person does not yet have the ability to choose.

The battlefront moves constantly. With every victory -- every choice to do what is right -- a person advances. And he retreats with every defeat. Pharaoh provides the paradigm of the latter. By repeatedly hardening his heart, he finally lost the capacity to exercise his free will.

In a contemporary context, Rabbi Dessler remarked that those who deny the possibility of free will do so because by failing to develop their own will power through the positive exercise of their free will they have lost their freedom.

"You deny free will because you are in fact unfree; you have enslaved yourselves to the evil within you."

The Truth about Religion: Using Evidence to Decide What to Believe

Where Do Good and Evil Come From?

Six Big Political Ideas the Torah Gave the World
Why the Mezuzah is Placed on a Slant
Faith: the Axis Upon Which the Wheel of Science Turns
Love - Not Just About Chemicals Anymore!
Comments
MOST POPULAR IN Spirituality
Our privacy policy