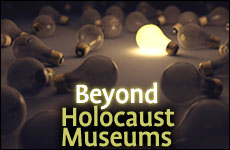 The best way to honor Holocaust victims is to celebrate the Judaism they wish they could have celebrated.

If you want to get in trouble in the Jewish world, critique anything that has to do with Holocaust remembrance. It's a pretty untouchable subject, and for good reason.

The Holocaust is a horror that melts the human heart, especially the Jewish heart. I'm not immune. For three years I lived next to a survivor, and I choked up every time I would hear another story. I was haunted for years by the scene in "Sophie's Choice" when Meryl Streep had to decide which of her two kids would go to the gas chamber. The Holocaust overwhelms me with grief.

So it is with some trepidation that I share with you my problem with the Jewish world's obsession with Holocaust remembrance.

Maybe it's a personal thing. I don't like feeling like a victim. It makes me smug, arrogant and constantly outraged. It feels good in the moment, but I never feel like doing anything except remind the world that I'm a victim, over and over again.

Feeling like a victim doesn't encourage me to improve myself. It just gives me instant righteousness. When I see how Jews are hated throughout the world -- especially how certain enemies threaten another Holocaust-- my righteousness goes off the charts. I get so worked up, so focused on our enemies, that I stop looking inward -- at the beauty of my Judaism, for instance, and how I can get closer to it.

This is why the best way I've found to honor Holocaust victims without feeling like a victim is to celebrate the Judaism they wish they could have celebrated. As I see it, wearing our Judaism on our sleeves is the best revenge.

Instead of forging a Jewish identity based on fear and suffering, let's forge one based on pride and knowledge.

I wonder what the Jewish world would be like if the slogan "never again" also came to mean: "never again will we not help Jews get closer to their Judaism." Could you imagine if we took half of the money we spend on Holocaust memorials and put it into Jewish education for all ages? Instead of forging a Jewish identity based on fear and suffering, we'd be forging one based on pride and knowledge.

It's clear, though, that because the Holocaust is such a sensitive subject, we haven't yet had a tough debate on the best way to commemorate this seminal tragedy. In the meantime, the promoters of victimhood have hijacked the agenda, and the fundraising pit to build more memorials seems bottomless. But think about it. What will better prevent another Holocaust: more fancy memorials to our suffering, or a generation of proud and committed Jews who love their Judaism and would do anything to defend it?

Proud, committed Jews are human museums. They are walking memorials to the power of the Jewish faith. They remember Hitler, but they study Hirsch. They honor Holocaust victims not by acting like victims, but by fearlessly living their Judaism. They honor the dead by helping the living.

Having said all that, I was lucky enough the other day to meet someone who volunteers at one of the crown jewels of Holocaust remembrance: The Museum of Tolerance.

Her name is Sally Schneider, and she's a former high school teacher who, for over 10 years, has been a volunteer tour guide at the museum.

She overflowed with enthusiasm on the importance of Holocaust memorials and I was eager to hear a passionate opinion that was different than mine. I have been to the museum, so nothing I heard surprised me: Examples of the horror of the Holocaust, the universal dangers of prejudice and evil, the importance of tolerance, etc. I decided to make things more interesting by sharing my personal skepticism. I challenged her: I asked whether her experience at the museum has strengthened her connection to Judaism.

Schneider is a straight shooter -- she told me that it didn't necessarily strengthen her connection to Judaism, but it did open her eyes to something else: The non-Jewish world.

The thing that has moved Schneider the most is not what the museum does for Jews, but what it does for non-Jews. She has seen former skin heads transformed after seeing their evil and hatred so graphically depicted.

She saw the daughter of a Nazi quietly sob because she couldn't shake her sense of responsibility for the horrors her father participated in.

She saw how the grandson of Gandhi and his wife were riveted by the tragedy of another people. She saw Hispanic, African-American and Asian kids of the inner city learn about hatred and prejudice, but more importantly, about tolerance-- not just as a Jewish ideal but as a universal one.

What Schneider was telling me was that the evils of prejudice and hatred that the Jews have faced and are still facing may be obvious to us, but it isn't to everybody else. She clearly sees the tragedy of the Holocaust as an opportunity to teach the world some important lessons, and her fondest wish is that in the end, many lives will be saved.

Maybe there's room for both.

This article originally appeared in the Jewish Journal.

The Jewish Art of Reflectology

Teaching the Holocaust to Our Children