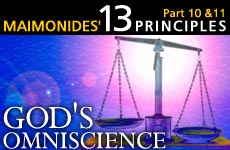 Rosh Hashana instills the awareness that God judges and rewards my actions, which gives meaning, purpose, and justification to life.

Based on a series of lectures by Rabbi Yaakov Weinberg, of blessed memory.

The Almighty knows the actions of people and does not ignore them. [It is] not like those who say (Ezekiel 8:12), "God has abandoned the land," but rather like [the Scriptures that attest to His scrutiny], as it says (Genesis 6:5), "The Almighty saw that there was great evil perpetrated by man in the land..." and (Genesis 18:20), "The Almighty said, 'The cry of Sodom and Gemorrah is great...' " All this attests to this principle.
-- Maimonides' 13 Principles of Faith

The Almighty rewards him who fulfills the commandments of the Torah and punishes him who transgresses its prohibitions. The greatest reward is [experiencing] the World to Come and the greatest punishment is to be cut off [from this experience]. We have already discussed this [issue] sufficiently. Scripture attests to this Principle, as it says (Exodus 32:32-33), "' Now if [only] You will bear their iniquity [concerning the Golden Calf], but if not, erase my name from Your Book.' And the Almighty responded to Moses: 'He who sins against Me will be erased from My Book.'" This [statement] affirms that [the Almighty] knows who serves [Him] and who transgresses, and rewards and punishes accordingly.

The tenth and eleventh Principles depict God as a judge examining the evidence placed in front of Him, considering the situation and its background, and finally making a decision and issuing a verdict. The significance of these two principles and their depiction of Divine Judgment must be examined. After all, it really isn't necessary for God to be aware of man's actions in order for there to be reward and punishment. Reward and punishment could have been built into creation such that reward would be the automatic consequence of fulfilling a commandment, and punishment the consequence of violating one.

This alternative reflects a model world into which justice was programmed as a natural outgrowth of various actions. In this system, there would be no need for man to be cognizant of God's awareness of his actions, since even if the Almighty did not know our actions, reward and punishment would exist as an automatic response to man's behavior. Indeed, some scholars maintain this position. (See the discussion of reward and punishment in the beginning of Shnei Luchos HaBris.)

The Rambam, however, by including the tenth Principle, asserts that man must know that God is aware of his actions in order to exist with a sense of meaning. Why is this awareness necessary? What is the tenth Principle telling us?

The Almighty's awareness of man's actions, and His responding to them with what man views as reward and punishment, is a sign that He cares.

In the introduction to this work, it was mentioned that an awareness of reward and punishment is essential for the relationship man has with God. Without God's response to his actions, man could not serve Him, for no relationship can exist on a unilateral basis. The Almighty's awareness of man's actions, and His responding to them with what man views as reward and punishment, is a sign that He cares. It signifies that one's actions make a difference.

Considering the alternative, the model world where justice is built automatically into creation, the promise of an impersonal reward and the threat of punishment would not be enough to motivate man to pursue the morally correct action.

This insight is the message that is conveyed through this Principle. It is imperative to know that God responds to man's actions. Because He will respond to me, I can feel that my behavior makes a difference. This difference gives meaning, purpose, and justification to life. Life has meaning when one has a relationship with the Almighty, and this relationship is predicated upon the reality of His response to our actions. A built-in reward and punishment system indicates indifference, and would destroy any possibility of a relationship between man and God. By including the tenth Principle, that God is aware of our actions, the Rambam is denying the possibility of a mechanical universe and asserting the truth of God's "personal" response to our actions.

It is this personal, caring response from God towards His People which Moshe Rabbeinu described as he prepared the Jewish Nation to receive the Torah:

"You have seen what I did to Egypt and how I carried you on the wings of eagles and brought you to Me." (Exodus 19:4)

At first glance, one would think that in order to motivate and inspire the Nation to accept the Torah, Moshe Rabbeinu is focusing its attention on the might and grandeur of the Almighty, who defeated the strongest nation in the world and enabled the Jews to escape from their iron prison. Yet Rashi understands the statement "You have seen what I did to Egypt" in a much more profound way. He states that Moshe Rabbeinu wanted to call the Nation of Israel's attention to the fact that although Egypt had been steeped in immorality and deserving of punishment long before the Exodus, the Almighty, with His unlimited patience, had waited and delayed retribution. The persecution of the Jews, however, brought an end to God's patience, and He let loose His wrath against the Egyptians.

Just as a father warns the bullies on the block: "Do what you want -- just stay clear of my kid," God's delay served as a warning to Egypt. Therefore, Rashi explains, Moshe Rabbeinu pointed out to his Nation the love and caring that God had demonstrated by causing the Exodus at exactly that time in history. Without this awareness of God's love, the Jews would not have trusted Him enough to commit themselves to His Torah.

God's love and concern are manifest through His judgment of us on Rosh Hashanah. The concept of Malchus -- the King who sits upon the Throne of Judgment -- is the theme of the Yom Tov. God is aware and He cares. He cares so much for His creations that He Himself judges them, weighing and assessing the actions of each one of His children.

The very process of judgment itself is the greatest act of kindness that the Almighty could bestow upon man.

Rosh Hashanah is the beginning of the Ten Days of Repentance, during which -- we are told by the Sages -- the Almighty comes close to man. Man is urged to "search for Him while He is to be found" (Isaiah 55:6; see Rosh Hashanah 18a; Rambam, Mishneh Torah, Laws of Repentance 2:6), return to Him while He is so close. People understand the Sages' words to mean that because God is about to judge man, He performs a special act of kindness by making Himself available to him before the final decision. However, these words really mean that the very process of judgment itself is the greatest act of kindness that the Almighty could bestow upon man. The act of judging, of relating to man, is exactly what creates the closeness to which the Sages are referring.

The kindness explains why Rosh Hashanah comes before Yom Kippur. One would think that the Ten Days of Repentance and Yom Kippur, the Day of Atonement, should have come first, before the Day of Judgment. Shouldn't God judge man after he has repented, after there has been atonement for his sins?

In order to appreciate the answer to this question, one must remember that an entire year has passed since the last period of repentance. Over this year, people become callous to the reality of judgment. They forget how important their actions are, become insensitive to the fact that what they do makes a difference because the Almighty cares. Accordingly, the answer to this question is that only the traumatic experience of being judged, of experiencing the awesome relationship of God judging man, rescues man from his apathy and inspires him to return to the Almighty. Once man regains the awareness that God is a King who cares, only then is he prepared to critically examine his life. Until one is aware of the God who judges, the God who cares, he cannot appreciate the God who forgives and grants atonement to His People.

This article is an excerpt from "Fundamentals and Faith: Insights into the Rambam's 13 Principles" by Rabbi Mordechai Blumenfeld.

Maimonides #12 - The Messianic Era
Bechukotai 5782: Divine Retribution
Behar 5782: Working to Live or Living to Work?
The Wholeness of Being Broken
Comments
MOST POPULAR IN Ideas
Our privacy policy